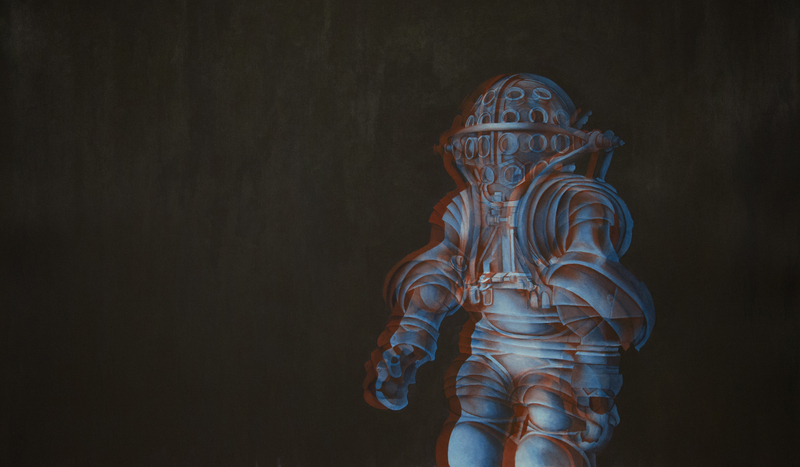 Artist GENEVIEVE QUICK is fascinated by the historical lineage of image-making technology from Victorian projectors like the magic lantern and the zoetrope to modern day cameras, space satellites and telescopes. Her low-tech versions of these instruments are constructed from model-making materials like foam core and styrene, and her subtractive drawings on transfer paper replicate the aesthetics and display of photographic negatives and simple 3D effects, reminding us of the profound role these mediating devices have played in the human exploration of previously uncharted spaces and ideas. Genevieve received her MFA from the San Francisco Art Institute (2001). Her recent solo exhibition Vertical Vistas at Royal Nonsuch Gallery in Oakland, California closed in February 2014. She has received a Center for Cultural Innovation Investing in Artists Grant (2011) and a Kala Fellowship (2011) and has also been awarded residencies at the de Young Museum (2011), MacDowell Colony (2010), Djerassi (2004), and Yaddo (2003). Genevieve lives in San Francisco, California.

OtherPeoplesPixels: What was the first machine you ever built?

Genevieve Quick: The P4 Series (Periscopic Panoramic Pinhole Photography) (2006) was the first machine I built. Before this piece, I was making these oversized landscapes out of modeling materials, like really big miniatures. I began thinking about integrating mirrors and lenses into the landscape itself as a way to explore the relationship between image and object. But the landscape became secondary in P4, and I ended up housing it inside an octagonal, cabinet-like form with a rotating pinhole camera attached on the top. Hiding the landscape inside this new piece forced the idea of landscape as an image, rather than as an embodied interaction. 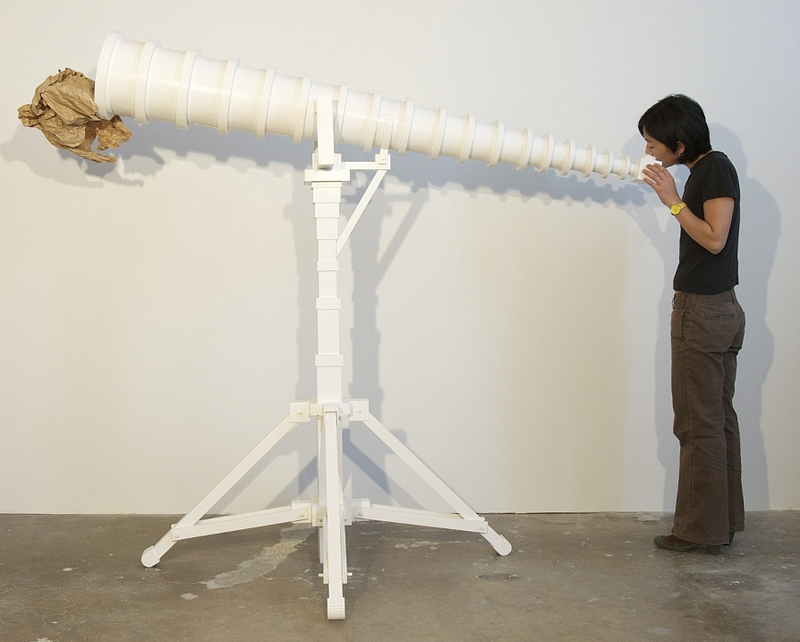 OPP: Could you talk about your choice to use lo-tech materials like foam core and paper to build optical machines like ScopeScape (2007), TerraVision (2005) and SnubSubScope (2008)?

GQ: I use foam core, styrene and paper because they are materials used in model making or prototyping. I draw upon engineering, architecture and design through my materials and the fabrication process. But I make devices that are completely redundant and fantasy driven; they have no real world functionality. Rather than more durable materials like wood, metal or injection molded plastic, I use materials that convey a sense of an incomplete and ongoing design process. More conventional materials, combined with the level of detail in the work, would make the objects too plausible and real.

OPP: Why is it important that these machines are “redundant and fantasy driven?”

GQ: Coming from sculpture with a limited knowledge of optics, I tend to think of things in mechanical or analog ways, rather than in mathematical or electronic terms. Current, emerging and useful technologies tend to be digital, but I'm not interested in writing code. And for that matter, Sony does a much better job than I could ever do. I am, however, really interested in how high-tech imaging relates to its analog ancestry. For instance, the front ends of digital and film cameras are similar; both need to respond to the physical world and the way light travels. The back end, where imagery is stored and later processed, is different. But even still, both operate similarly: a light sensitive sensor in a digital camera has replaced light sensitive film. While the objects I make have no real practical application, they allow me to break down vision or imaging in ways that are consumable. I think of what I do as a macro approach; my sculptures offer a way to think about generalizable ideas. 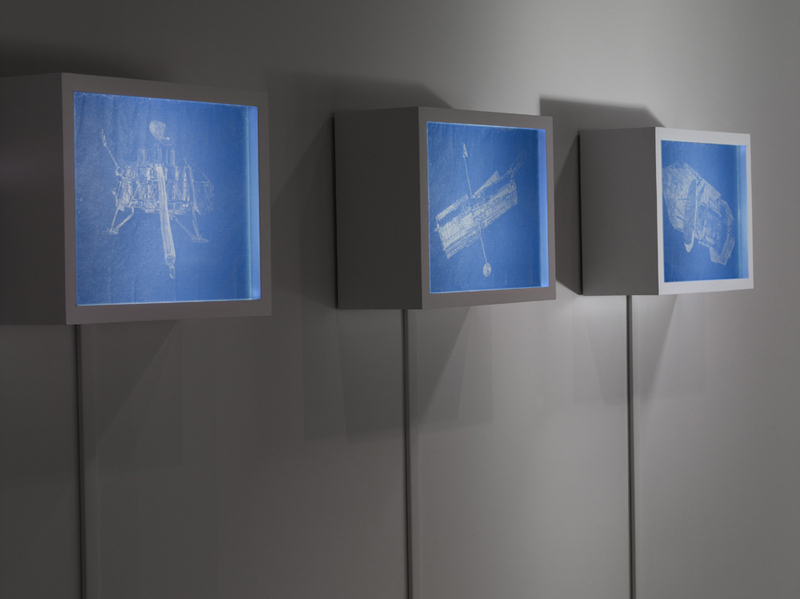 OPP: You've combined drawing and photography in several projects, including Analog Missions and Other Tests (2010) and your AstroScopic Series (2009) by creating hand-drawn "negatives" that are displayed on light boxes. Could you talk about the photography references in these drawings?

GQ: I’m interested in blurring the boundaries of photography through the materials and processes of sculpture and drawing. These drawings are a low-tech approximation to how photography works. The transfer paper I've been using is visually similar to a film negative. The imagery is inverted, left to right and in terms of value. The blue transfer paper references cyanotypes, an early photographic process that uses Prussian blue, light-sensitive chemistry. Until recently, cyanotypes were used for the blue print processes of architectural and engineering drawing, so this process has always had one foot in photography and one in drawing. I've since expanded the materials to grey transfer paper—following the development of photographic processes from cyan to black and white photography—and gridded vellum, which references drafting. Calotypes, another early photographic process, were actually paper negatives. So, all of these images are also displayed in light boxes to reference the photographic process, and they are capable of producing prints. The imagery all relates to space exploration or testing. The images in the AstroScopic Series are all space telescopes and the Analog Missions and Other Tests are all based on the testing that scientists do on the ground before launching the objects or people into space.

OPP: Recently, you've drawn a clear connection between space travel and deep-sea diving in your video A Trip to the Abyss 20,000 Leagues Beneath the Far Side of the Sun and Moon (2013), which pairs underwater clips and outer space clips appropriated from over 50 science fiction movies. Your AstroAquaAnaglyphs (2013) are works on paper that appear three-dimensional with 3D glasses. They compare space suits and underwater diving suits. What's fascinating to you about these different domains of exploration?

GQ: Given their lack of a breathable atmosphere, as well as gravity and pressure issues, sea and space are both completely inhospitable places for humans. But there are a wide range of technological mechanisms that allow astronauts and scuba divers to briefly inhabit and see these places. Since most of us are unable to go to either, these devices get transformed or complimented with photography and video technology to create a sort of remote vision. The visual experience can be so disembodied and mediated, both for the astronauts/scuba divers and for everyone else looking at the video or photographs. 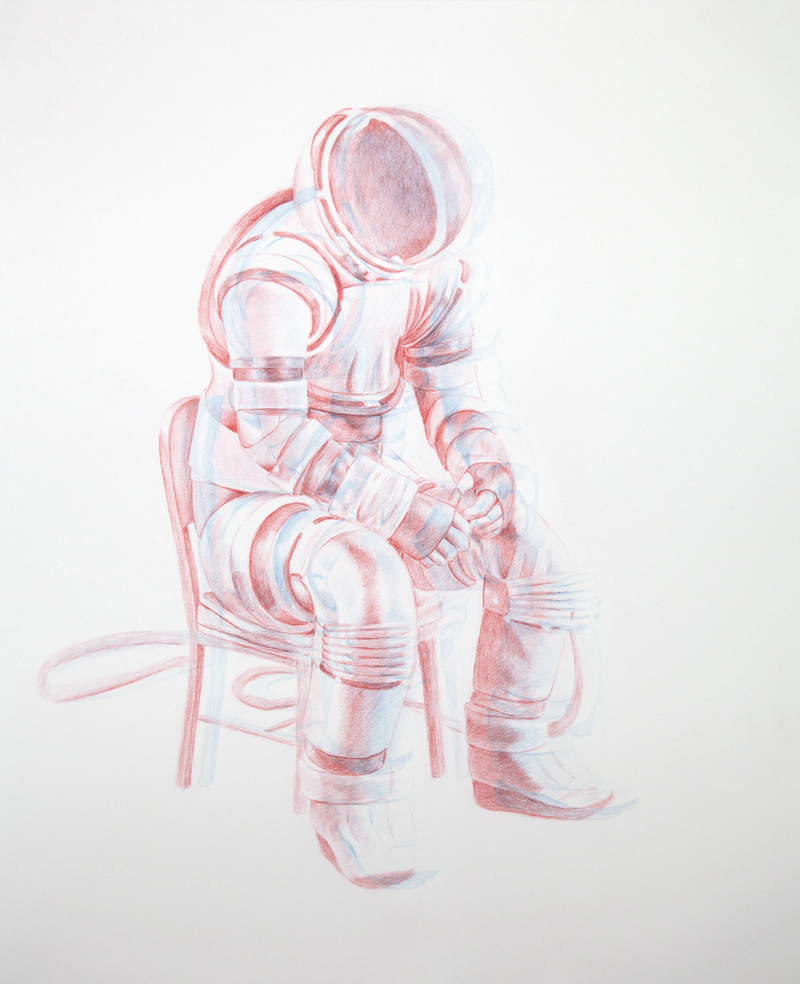 OPP: Growing up in the 80s, I remember a sense of awe about space travel. It seems like when space is in the news, no one is really impressed anymore, like the mystery is gone. People seem more interested in the iPad than Mars. Has our collective cultural interest in space been surpassed by the advent of the internet and technology for personal use? I'm wondering if this is just because I'm older now, or if our collective attitude has changed. Thoughts?

GQ: I think that there is still a lot of public interest in space. But there is a difference in how we are thinking about space travel. Basically we’ve abandoned manned flights and are thinking about robotic or mechanical means of exploration, like the Hubble Telescope and Mars Rovers. While I agree that NASA’s golden era is over, private enterprises (like Space X and James Cameron) and foreign countries are pursuing manned space exploration. I don’t think that private enterprise will create great discoveries or inventions, but will allow wealthy non-professionals to buy an experience that was previously reserved for astronauts, who were the physical and intellectual elite. If trickle down economics technology actually works in this case, it could provide greater accessibility to space travel for common individuals, much like what happened with airplanes.

OPP: Do you think mediated experience of mostly inaccessible spaces adds to or detracts from a collective sense of wonder?

GQ: It definitely adds to a collective sense of wonder. After all, every experience is mediated by our senses. So, mediation itself doesn't really affect our reading of imagery. The bizarreness of deep sea creatures like the Dumbo Octopus, which was only recently discovered, is completely amazing. It just proves how much we still don’t know. Since we first mastered the ability to capture an indexical likeness, we've been using lens-based technology to see things not readily perceptible to the naked eye. Muybridge and his galloping horse, x-ray photography, surgical applications of fiber optics and space telescopes are all attempts to visualize ideas or things that humans had never seen before but had hunches about. They've all, at least momentarily, satisfied and sparked our sense of wonder. 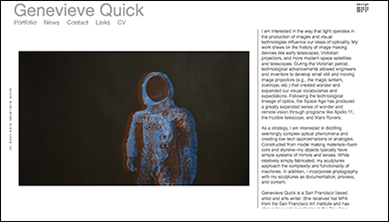 To see more of Genevieve's work, please visit genevievequick.com.
Featured Artist Interviews are conducted by Chicago-based interdisciplinary artist Stacia Yeapanis. When she’s not writing for OPP, Stacia explores the relationship between repetition, desire and impermanence in her cross-stitch embroideries, remix video and collage installations. She is an instructor in the Department of Fiber and Material Studies at The School of the Art Institute of Chicago, where received her MFA in 2006, and was a 2012-2013 Mentor-in-Residence at BOLT in Chicago. Recent solo exhibitions include I Still Haven’t Found What I’m Looking For (2013) at Klemm Gallery, Siena Heights University (Adrian, Michigan) and Everything You Need is Already Here (2014) at Heaven Gallery in Chicago.