Using the traditional craft techniques of felt-making, paper-making and embroidery, FAFNIR ADAMITES  creates both intimate, personal memorials and large-scale, abstract monuments. Influenced by theories of inherited trauma from previous generations, she employs the forms of the hidden mass, the implied void and traced/retraced text to provide viewers an opportunity for ongoing contemplation because, as she writes, “the surest engagement with memory lies in it's perpetual irresolution.” Fafnir graduated Cum Laude from University of Massachusetts, Amherst with a BA in Women’s  Studies and Photography in 2001. In May 2015, she earned her MFA in Fiber and Material Studies from The School of the Art Institute of Chicago in. Her work will be included in Materialities: Contemporary Textile Arts, juried by Namita Gupta Wiggers. The show opens on August 27, 2015 at Arrowmont School of Craft in Craft in Gatlinburg, Tennessee. Fafnir lives and works in Turners Falls, Massachusetts.

OtherPeoplesPixels: One of your staple processes is felt-making. Can you briefly describe this process for those who have never thought about felt before. Why do you choose this process? What's compelling about it conceptually and/or viscerally?

Fafnir Adamites: Felt is the oldest form of fabric, pre-dating knitting and weaving. It is the process of transforming loose, unspun wool into a tight, non-woven fabric. By adding hot, soapy water to the wool and agitating it—my particular process involves rolling and hand-manipulation—the wool fibers shrink and form a dense mass. I’ve always been drawn to intensive processes in the studio. I was a black and white darkroom nerd in undergrad. There’s something about the sharp grain of a perfectly developed photograph that relates to the fine surface of a well-felted object. Processes like these suit perfectionists. They can be unforgiving to the cocky and ultimately rewarding to the person who can slow down and collaborate with the materials and tools. 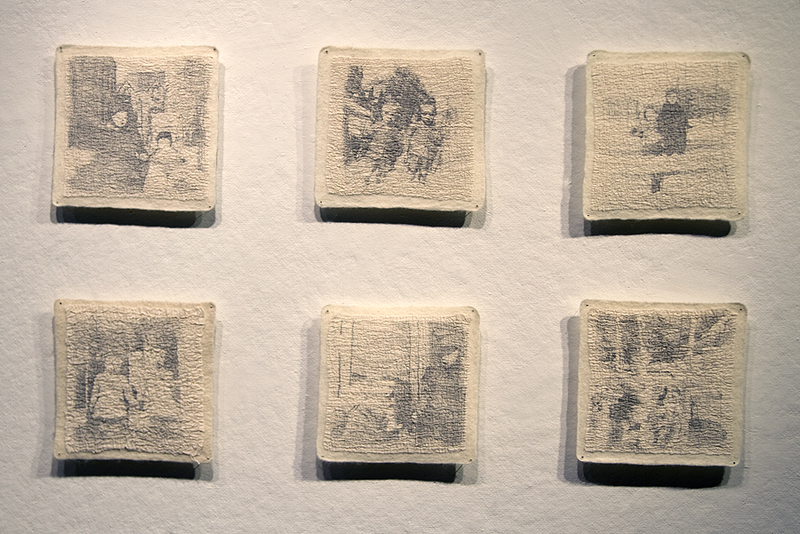 FA: The repetition of felt-making is part of the appeal for me. The time that’s required allows for meditation and demands physical stamina to see the process through to the end. The transformative quality of felt also intrigues me. Through the shrinking of the wool, I transcribe my actions and embed meaning into the surface of the material.

Felt is a chaos structure that is not constructed in a rigid, striated method like weaving. Felt, like paper, is a mass of unruly fibers. Deleuze and Guattari wrote about the smooth and the striated in A Thousand Plateaus. They make an interesting distinction between the infinite and open nature of felt-making and the spatially limited nature of a process like weaving which always consists of mobile and passive parts. These two distinct forms are inherently different yet wholly inseparable. The felted burlap technique that I have used in a number of recent sculptures is a combination of the smooth and the striated. The smooth, chaotic structure of the felt disrupts the rigid, striated formation of the woven burlap, creating a new beast all together. Chaos overtakes the ruthless grid. 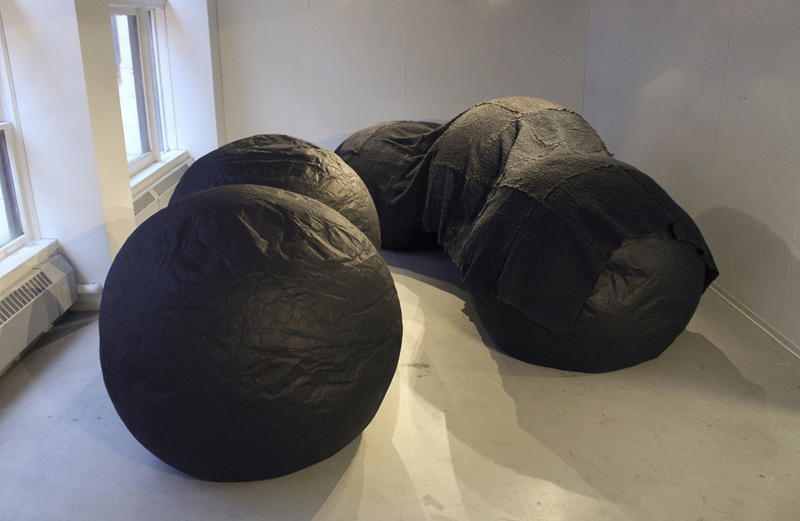 OPP: What Conceals and Monument for the Irresolvable, both 2014, formally represent unseen masses. The viewer only has access to the shell or shroud. Both pieces make me think of the idiomatic elephant in the room. What's the elephant in the room in these works?

FA: There is no discrete thing/trauma/experience that I am shrouding or covering up. So maybe the elephant in the room is in fact the elephant in the room. My intent was to designate space for contemplation on absence. The purpose is to shift the authority or the prescription of what is to be mourned and what is worthy of our grief and attention. Pursuing a void form was one method to fill the space and avoid a reference to any particular moment in time or any kind of conclusion.

My research on the counter-monument movement in Germany helped bring me to these void forms. I am particularly interested in how the counter-monument artists approached the conundrum of representing an absence. They were not moved to find closure or seek an end point to the traumas they were memorializing. Instead, they worked with the notion that the surest engagement with memory lies in its perpetual irresolution.

These pieces are less about what is being remembered, suppressed or hidden, and more about leaving space for whatever that phantom is that haunts us. Whether you do anything about it or not, I think it’s incredibly important to acknowledge that it is indeed there. 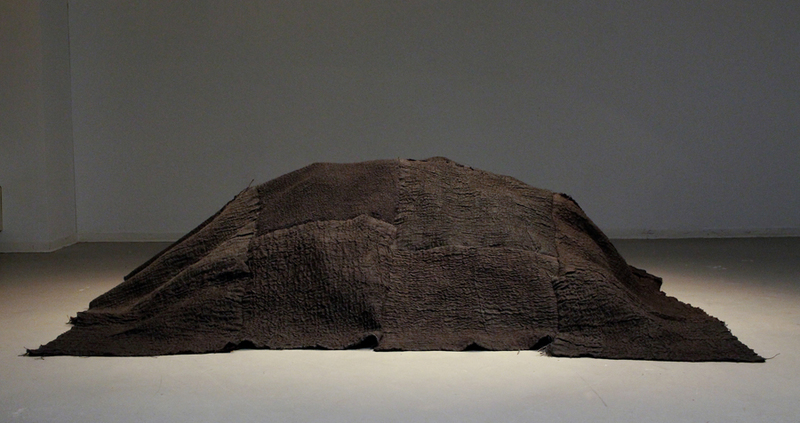 OPP: Please talk about your text-based, textile works Writing Adamites (2014) and He Was a Worker (2014), in which you use embroidery to trace written language that relates to your ancestors. How do these pieces relate to your interest in patterns, both personal and collective?

FA: This work began with my research on Transgenerational Epigenetic Inheritance. This is the theory that environmental events, traumas and anxieties can be imprinted on a person’s DNA and passed down to future generations. I’m fascinated and frankly horrified by the idea that I may be trapped within the events and emotional fallout of generations before me, that I may be pre-programmed to react and exist based not on the current positive or negative forces in my life, but by the forces that were in place decades before me.

In trying to shed some light on my own family’s history, the act of retracing became a potent symbol and method of research, meditation and intimacy. I used the writing of a family friend, poet Robert Francis, to enter their lives and search for a likeness or some shred of familiarity. Physically tracing the words that described my grandfather, his parents and siblings was an act of reverence and a way to slow down and choose to exist within a storyline that I originally saw as a hereditary trap. Retracing someone else’s words, footprints or habits by choice rather than by force can lead to a power shift. 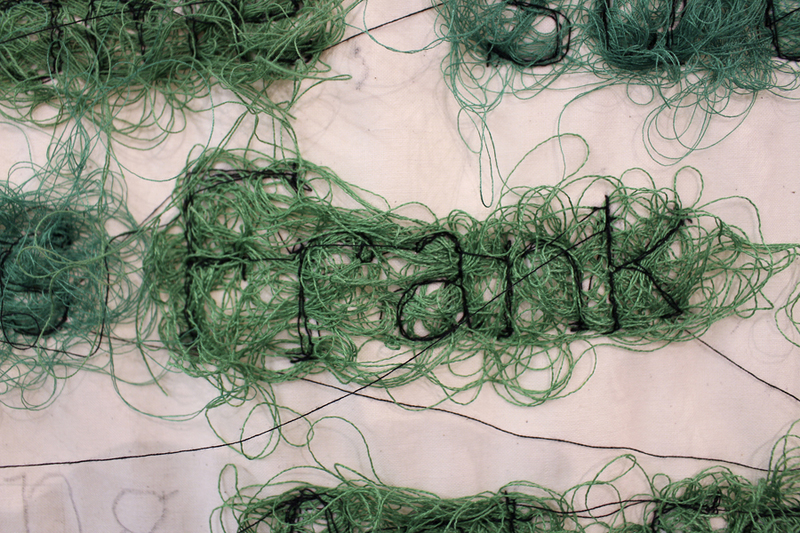 OPP: Highlighting and obscuring are conceptual and formal strategies that overlap with one another in your work. Are these sometimes the same thing? Are they always the same thing?

FA: These strategies are definitely not static, which is part of what draws me to them. Sometimes I think I’m visually highlighting something when actually what I’m doing is obscuring it. As the maker, I can’t always pinpoint which is happening until after the fact. There’s a fluidity that exists in the searching. I’m intrigued by the way that the actions of underlining and redacting can contradict their own intended purposes. Frustratingly, clarity often eludes you when you search too forcefully. Obscuring, or allowing something to be opaque, can make it more approachable. Mucking around in the grey area ultimately dislodges something that is fundamental to a final exposure. Sometimes a guide is revealed in the process. This occurs in my work through the dislocation of meaning when words are redacted or highlighted within a text or when an image is physically altered during the felt-making process. Similarly, the visual signs of concealment are the best way to draw attention to it. 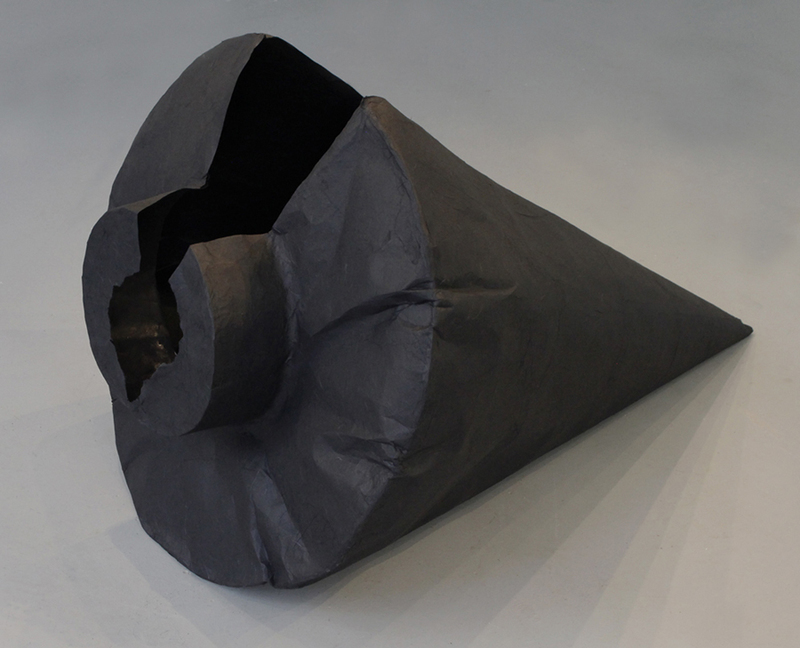 OPP: You literally finished graduate school a month and half ago. It's an experience that many artists have had, and we all know how intense, rewarding and difficult it can be. What was your experience like?

FA: Going back to school for my MFA degree at SAIC after over a decade of being out of school was a jarring experience for me. It forced me to examine a lot of my habits: as a student, an artist and a slightly misanthropic human. The advising sessions, critiques and constant examination of the minutiae of my thinking and my work was a lot like therapy. And it was just the kind of intensity that I needed. I entered knowing that I had to shed some old tendencies and blockages to be able to get deeper into the conceptual intentions of my work and to re-commit myself to my studio practice.

OPP: How does it feel to be entering the next phase of your artistic life? Are you on to new projects yet?

FA: It will take some time for me to fully process my MFA experience and reacclimate to my normal life. While I’m doing that, I have a day job at a special collections archive at the University of Massachusetts in Amherst and will begin teaching felt-making and other fiber processes at Snow Farm in Williamsburg, Massachusetts. I’ve been researching for and designing a college level class which combines an intellectual investigation into the history of making and integrating traditional craft processes into fine art studio practice. I’ve also been writing an article on the marginalization of fiber art in the contemporary art world. 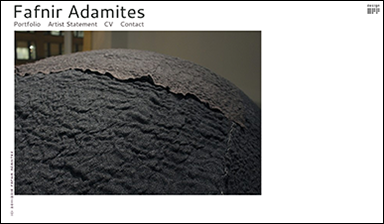