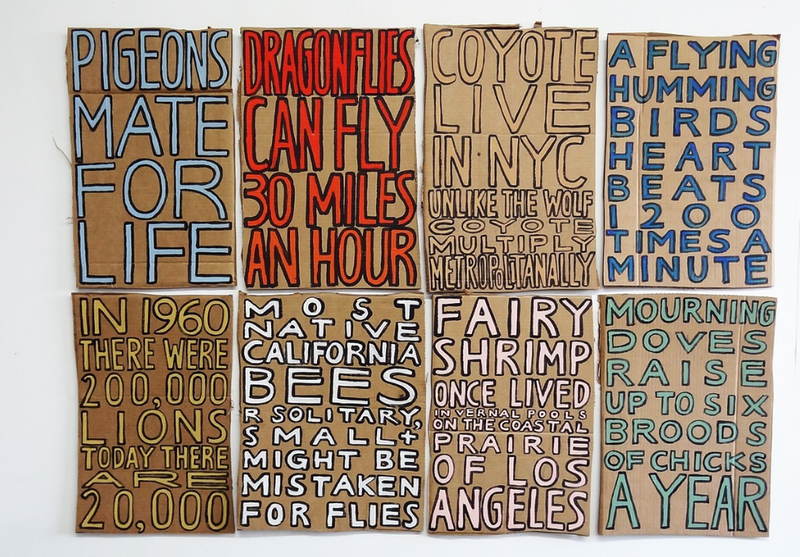 FED EX BOX
Acrylic on recycled cardboard
Each sign approx 13" x 17"
These signs were made from one half of a found fed ex shipping box. The signs were then sent out to people to hang in their neighborhoods, including New York City and Palo Alto.

ELKPEN’s ecologically-oriented work takes so many forms: screen-printed T-shirts, postcard drawings, murals, chalk drawings in public spaces, informational placards on recycled shipping boxes, all of which live out in the world, where they can have the biggest effect. She began her ongoing project Elkology in 2009 in the hopes that "seeing would beget more seeing." Her hand-painted, informational signs on recycled cardboard reference both advertising and protest placards. She inserts them into the urban landscape to highlight the overlooked wilderness that still exists and to memorialize the numerous losses of species and changes to the natural world. Currently, Elkpen is working on a large mural project about the natural history of the San Fernando Valley. She lives and works in Los Angeles.

OtherPeoplesPixels: Tell us a bit about your upbringing and background as an artist.

Elkpen: I grew up between rural Nova Scotia and Brooklyn, New York. . . divorced parents!!! I think that split between country and city deeply impressed me and had a lot to do with my beginning my Elkology project to find nature in urban environments. Once I embarked on that, I discovered urban ecology is a growing field. It completely preoccupies me now.

I have not had a lot of training as an artist. I dropped out of art school after a year. My biggest education was a Saul Steinberg book I got when I was a kid. I heard he never drew in situ, but traveled and remembered what he saw. Observation is so key. I’ve since collected a lot of graphic material from Little Nemo to Tony Millionaire. Inspirational. . . as are outsider artists, sign makers and maps. I worked as a sign painter and cartographer before going full time freelance with illustration. 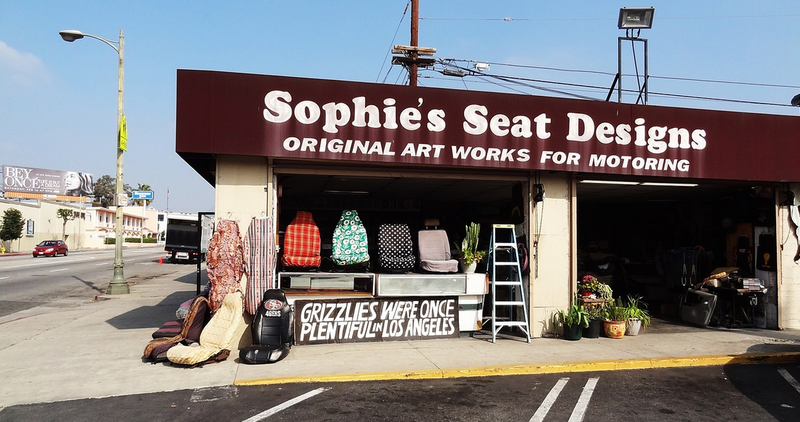 OPP: Could you introduce us to your project Elkology? When did you first begin this project?

Elkpen: I had just moved to a pretty beaten down part of Hollywood in Los Angeles. My workroom was a tiny, rickety built-on porch on the second floor. I was astonished at how many birds I could see from there. At the time I was collecting old nature guide books, and I had an idea to make a guide for birds on the street. I thought, wow, nobody thinks this crummy place is worth anything, and yet there is all this life here!

That was the impetus. Then came a lot of experimentation about what medium was appropriate. The form of the sign fit exactly what I had in mind. We are so bombarded with signs that have completely useless information. I liked the idea of re-appropriating the space for signs on the street. And I liked the idea of impermanent materials. . . the signs, whether chalk drawings on the sidewalk, or twine and cardboard tied up somewhere are subject to vanish: just like wildlife. 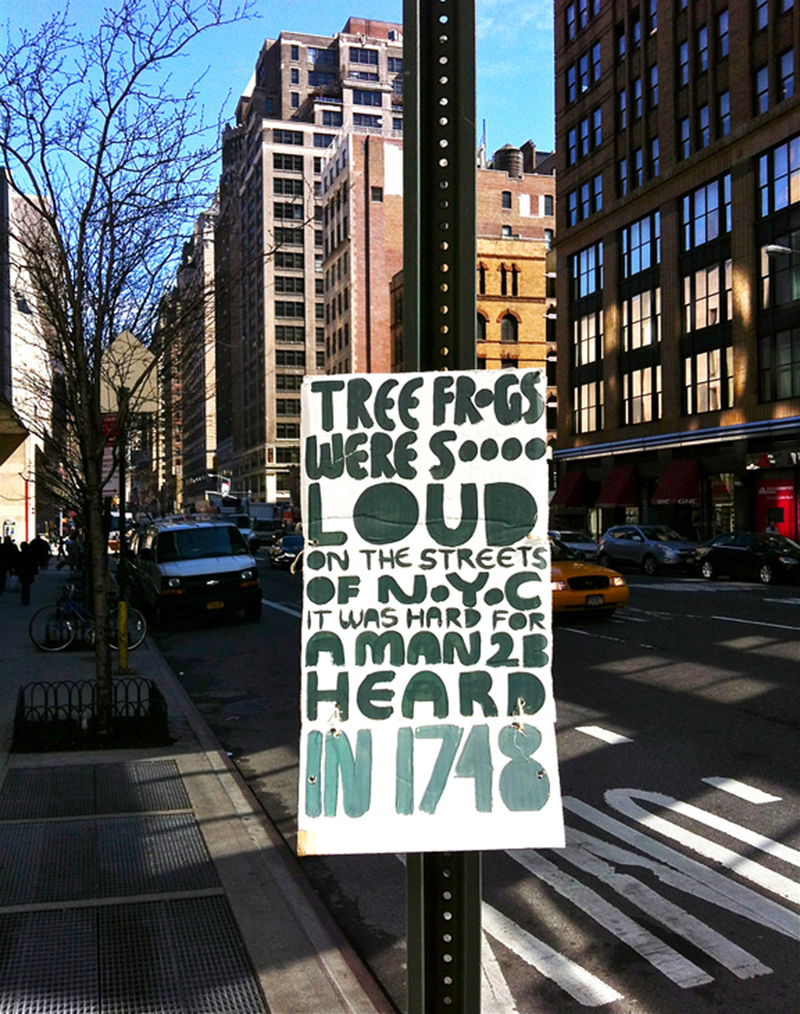 OPP: Do you ever exhibit in galleries? Do you have any desire to?

Elkpen: I have occasional gallery shows. Nothing too consequential. I don’t really think of that as a venue for me. But I do want to do a lot more work outside. I get excited thinking about places to put images where they might be least expected: napkins, the bottoms of shoes, a gutter. I have wanted to do a matchbook campaign forever. I want to put something of value where you don’t expect to find value. I think we kind of look at wild environments in this way, which is to say we overlook them. 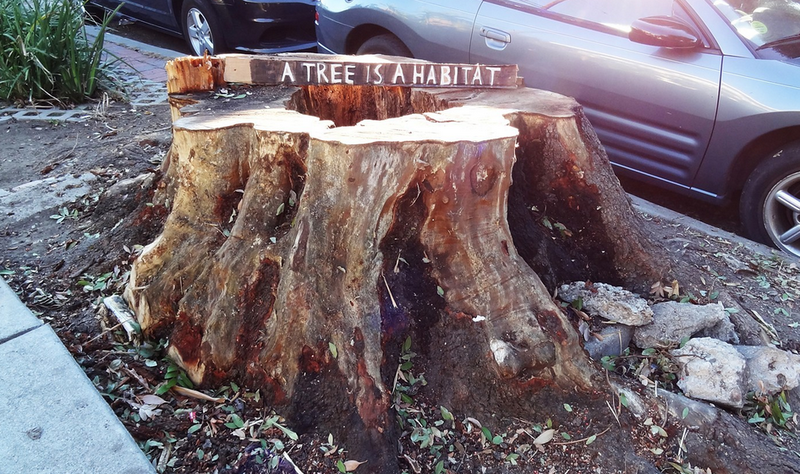 A TREE IS A HABITAT
Acrylic on recycled cardboard
Hollywood

OPP: Do you insert your signs guerrilla-style or with permission in to public spaces?

Elkpen: Most of the time, it’s guerrilla-style. I do approach shop keepers to leave signs at their stores. That’s often a really nice transaction, an opportunity to talk directly to people about the content of the signs. I’ve put signs up in the neighborhood to later find them gone with a note from someone in the neighborhood in their place talking about whatever species I have referenced. I choose spots for a few reasons. Often you can see the species I name in the sign there, as in Phoebe. Other times the site has some resonance with the content of the sign. For example, I wanted to make a sign about the overlooked pigeon, and the park bench was a natural choice for Pigeon Trivia. Sometimes it is simply a nice spot or a highly visible spot. But it is not random where I put the signs. Sometimes I find the spot after I have a sign, but other times I see the spot first. There's this giant, pink behemoth of a building on Sunset Boulevard. It's all one color and so enormously bland. I think of it as a strange kind of blind spot, so I made a sign for it that was not easy to see in order to talk about other things that are not easy to see. 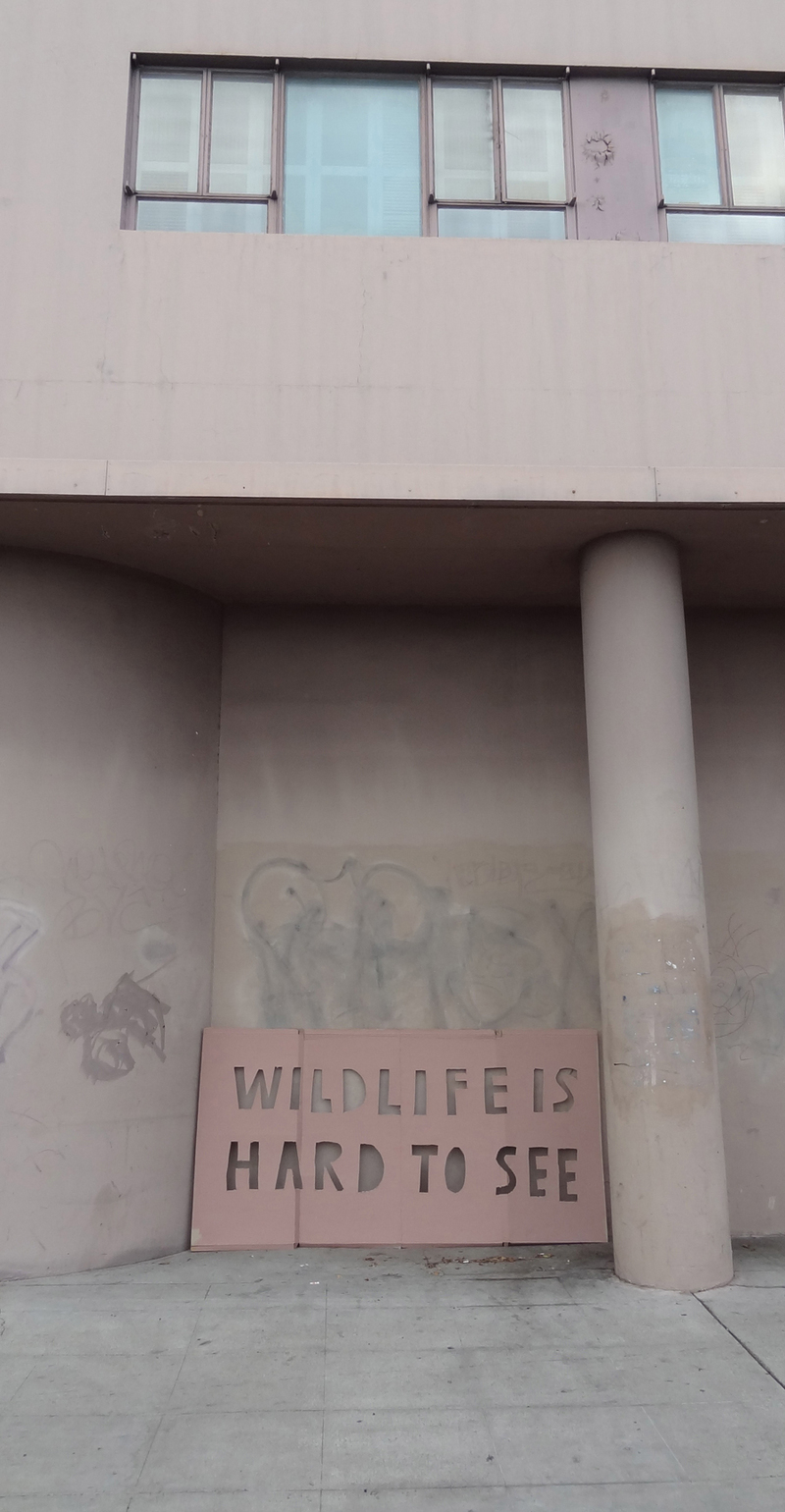 OPP: Could you talk about the relationship between elkology and graffiti art?

Elkpen: I don’t think what I am doing is graffiti art. And it is not really street art either. Even though it shares some things with these two art forms. It’s just an idiosyncratic thing I am up to. I am trying to think of ways to have conversations with people about natural history and wildlife and conservation. I do not want to be didactic, depressing or heavy. I want to create wonderment about the natural world. Because, if you stop to think about it for a minute, it is wonderous. 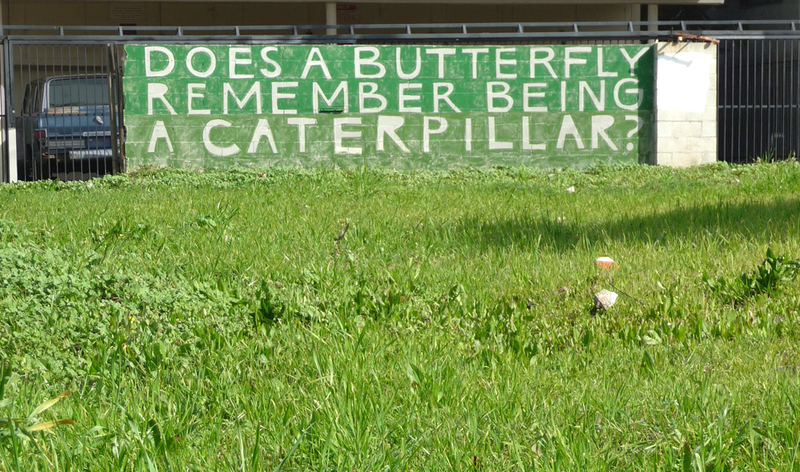 DOES A BUTTERFLY
Painted wall in vacant lot
Hollywood

OPP: What are you up to right now and what’s on the horizon?

Elkpen: My present project is not a sign project. Though if I were a bolder artist, I would have made it into a giant sign project. I’ve been commissioned to create a three-part mural about the natural history of the San Fernando Valley. It is a new thing for me to work with a big team and install the mural on site. I have an idea to make a comic book from the mural because it has so much detail in it. I’ve always wanted to do a comic book. The intermediate step will be a QPC code that brings views of the mural to a website which will have the details of the mural itemized with topical information. That will be the rough draft of the printed book and a way to access people's interest through the platform of smart phones.

I've also been thinking about a water conservation project. There is this huge issue right in front of us Californians that most of us really know so little about. I’ve been really disappointed with public service announcements about water conservation. I am not sure how the project will take shape yet, but I keep returning to this idea that if we thought of water as gold, we would treat it much differently.

Featured Artist Interviews are conducted by Chicago-based, interdisciplinary artist Stacia Yeapanis. When she’s not writing for OPP, Stacia explores the relationship between repetition, desire and impermanence in cross-stitch embroideries, remix video, collage and impermanent installations. She is an instructor in the Department of Fiber and Material Studies at The School of the Art Institute of Chicago, where received her MFA in 2006, and was a 2012-2013 Mentor-in-Residence at BOLT in Chicago. Recent exhibitions include solo shows I Still Haven’t Found What I’m Looking For (2013) at Klemm Gallery, Siena Heights University (Adrian, Michigan) andEverything You Need is Already Here (2014) at Heaven Gallery in Chicago, as well as Here|Now, a two-person exhibition curated by MK Meador and also featuring the work of Jason Uriah White, at Design Cloud in Chicago (2014). Most recently, Stacia created  When Things Fall Apart, a durational, collage installation in the Annex Gallery at Lillstreet Art Center. Closing reception guests were invited to help break down the piece by pulling pins out of the wall.