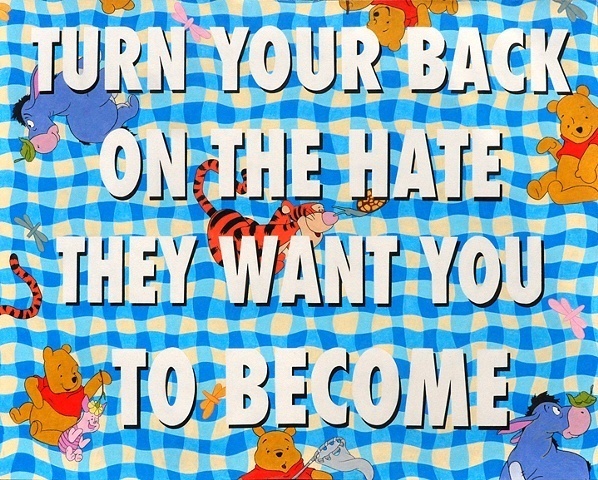 DOUG CROCCO uses color pencils to create detailed drawings which reveal the uncertainty of our cultural and ecological moment. He uses pithy text and pop culture visuals to explore where we are as a culture in relation to the precarity of crumbling structures. He received his MFA from Claremont Graduate University in 2003. Doug lives and works in Los Angeles, California.

OtherPeoplesPixels: You work in exclusively color pencils. How did you start using this drawing medium?

Doug Crocco: I've always drawn with color pencils. As a child, I would redraw things like garbage pail kids and cartoon characters with them. In undergrad I played around a lot with assemblage and painting and built a large body of work that was heavy and hard to manage. All the while, I habitually maintained intense sketch books. Since I move a lot, eventually the weight of the paintings lost out to the transportability and ease of storing works on paper. I can put 100 works in a box and that equals a win for me. :)

OPP: What do you love about the medium?

DC: I love drawing period. I love the activity, the hand to surface interaction. I love the freedom of the line. The line can go anywhere and become anything. I also love how color pencils, which are wax, become like paint when you build up the surface. It can become like liquid if you know how to manipulate it. 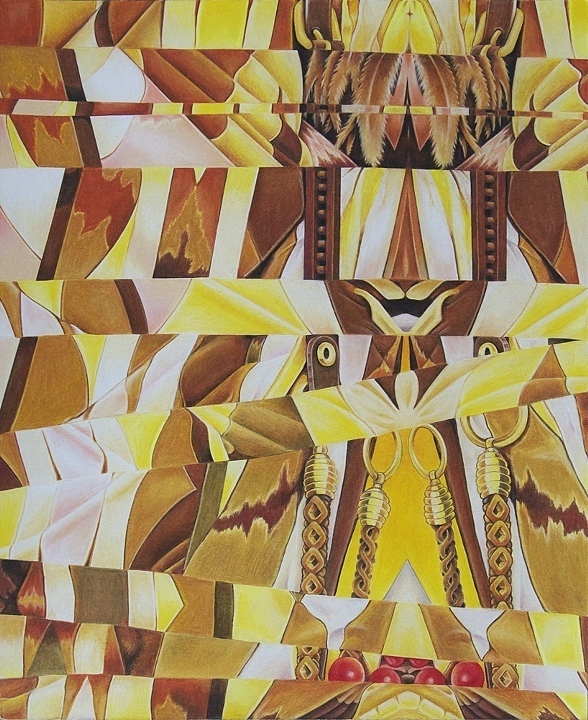 OPP: What are some of the limitations?

DC: I don't believe drawings have limitations. In fact I believe the opposite: drawings are transformative, in the sense that you can draw anything. I can draw a sculpture or an abstract space. I can draw a landscape or a flat text piece. Technically I can create the feel of printmaking, painting, or images that are loose sketches of ideas or movements. To draw is to be liberated and to know no limitations.

OPP: Your 2008 series Entropy is a juxtaposition of visuals and text which represent seemingly disparate modes of operating in the face of uncertainty. The colorful drawings with Winnie the Pooh backgrounds evoke a (potentially) overly-sunny disposition, while the black and white drawings evoke heavy metal and hard rock, leading me to think of anxious aggression. Can you talk about this juxtaposition?DC: This body of work was meant to create a dialog between the images which you have picked up on. The Poohs, as I call them, aren't purely saccharin. I actually find them quite sad, as they plead the viewer to contemplate archetypal idealism while simultaneously being confronted with images that celebrate aggression and dark energy. For example, VIVA DEATH is based on a Bush era campaign button that read "Viva Bush." It was used to target the Hispanic American vote. I turned it into black and white and inserted death, so that it reads live to die, or long live death. I also liked the yin-yang feel of it, conceptually and visually. So when you have an image that reads HOLD ON TO OUR LOVE which implies love is escaping you, next to VIVA DEATH, you are simultaneously engaging polar paradigms that may seem disparate but are, in fact, two sides of the same coin. It is up to the viewer to identify with the imagery. These works also reference the ideas in two books I would recommend, The Tao of Pooh by Benjamin Hoff and Perpetual War for Perpetual Peace by Gore Vidal. 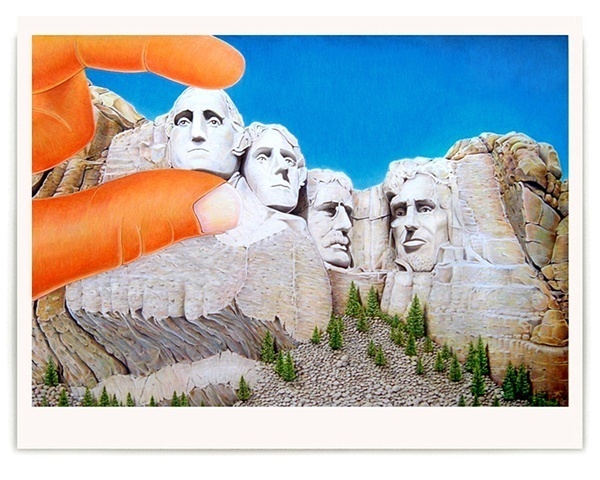 OPP: A lot of your work seems to be about the idea that something is falling apart, both in terms of nature and culture. I see an underlying sense of anxiety peaking through a thin coat of optimism. I can't decide if the optimism is real or just sleight of hand, as used in the advertising you reference in the graphic text you draw. Are you more anxious or more optimistic about the state of things?

DC: Well, if one reads the newspapers, it's easy to come to the conclusion that, yes, in fact, things are falling apart. There are more global crises than I have fingers to count them on, and someone mentioned to me the other day that the end of the world was in December. As every day on the calendar ticks off, people are becoming more and more anxious for good reason. I recently made a piece called Cliff Notes on The Rise and Fall of Western Civilization, because the book would take to long to read, and I only have the attention span to read headlines anyways. I have some musician buddies that made an album called Americas Idle. Brilliant.In general, I am optimistic, because I think you can't suppress or pervert the good nature of humans forever. I also believe that there is enough money and brainpower on this planet to fix anything, despite the ambitions of a few to hoard wealth and dictate the course of history. Yes, I have a degree in advertising and employ some of the tricks of the trade. I like to think of it as my brand of inverse MK Ultra. But, at the end of the day, it is important for all art to maintain some sense of mystery. 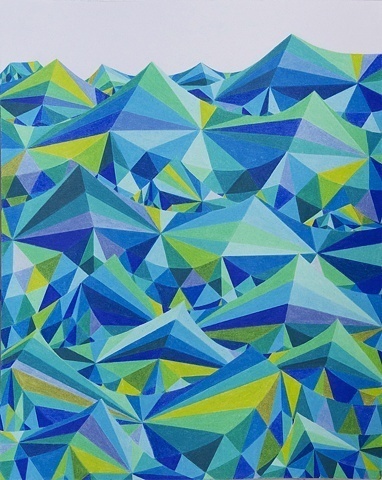 OPP: Can you talk about the shift to abstraction in your newest drawings, Quantum Structures?

DC: Yes. It's actually a nice transition from your last question. While not completely separate from my other works, these are more about the invisible. I wanted to create a group of conceptual abstractions that dealt with things that were governed by the laws of nature and not men. They were also a nice break for me to create visual mathematical puzzles. For example, I made an image I called An Algorithm For Fire, which is a fun idea. I recently read The Grand Design, or, as I call it, Stephen Hawking's quest to rationalize why a computer talks for him. Before this, I read a bunch of books on M-theory. I'm fascinated by the superstructures and laws, whether man-made or omnipresent, that govern our lives. I am also interested in the here and now; perhaps I'll draw some nano tech snow flakes next.

DC: I grew up in Miami, but my mother is what you might call a Los Alamos Baby. Both my grandparents worked at Los Alamos Laboratories for over 30 years. When I was a kid, my grandfather told me stories about what was going on there. Beyond all the nuclear research, they are also heavily involved with genetic engineering. I have been making work referencing those stories and these sort of ideas since 2000. However, they are more mainstream now. I just read how scientists have altered cows so that they produce milk that lactose intolerant humans can ingest. I also read about how Monsanto recently made corn that explodes the stomachs of insects. While the possibilities of bio engineering are mind blowing, I feel we are playing with fire. My last piece of that series was entitled Serpents, which is also the title of my favorite Jeff Koons piece. Both have a candy-coated, creepy feel that I get when I think about whats going on. 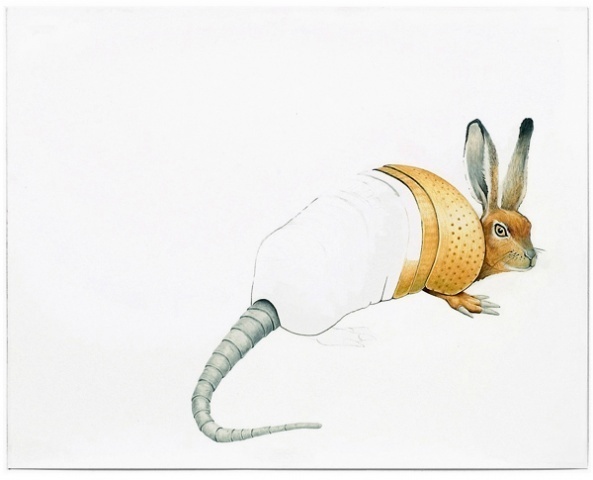 OPP: Do you have an overall favorite piece by another artist?

DC: I love art. I am a self-described looker, and, in saying that, I can back it up. I go to a lot of the big art fairs and, having lived in NYC and LA, I have seen hundreds of gallery and museum shows. I also look at tons of art online. I'm telling you this to justify my answer of no. I have no favorite piece, because there are hundreds that I love. I think the easiest way to appreciate my taste is to take a second to look at my other website: www.cult2vader.com. It's a visual image bank of things that I'm looking at, and I update it often. The images are all hyper-linked, so if you see something you like, you can easily get more info. I often refer collectors who I consult for to it as a starting point.

OPP: What's your favorite piece of your own work?

DC: It's usually the one I just made. Right now it's a toss up between my latest flag piece and an abstract piece Mr. Hawkins could appreciate called The Possibility of Infinite Possibilities. 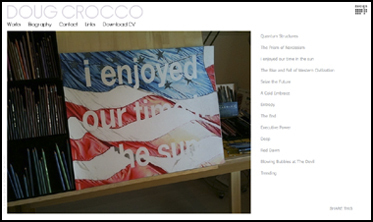