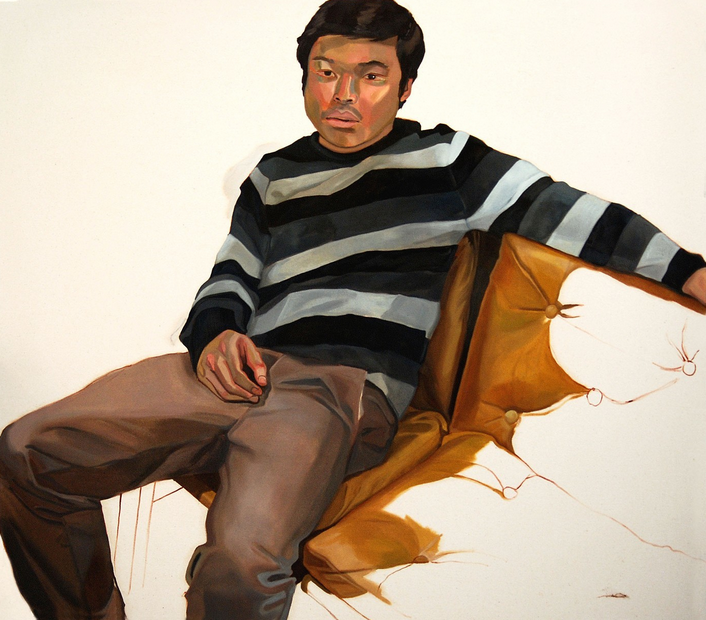 DANIEL KORNRUMPF's oil paintings of close friends and family members and embroideries of strangers found on social media remind us to consider the intimacy and agency of looking and being looked at. While the paintings harken back to the tradition of sitting for a portrait, in which there is a tangible interaction between the artist and the subjects, the embroideries hint at the disembodied way his subjects present themselves online: they know they're being seen, but never experience the Gaze directly. Daniel earned his BFA in 2005 from Kutztown University in Pennsylvania and MFA in 2007 from Pennsylvania Academy of the Fine Arts in Philadelphia. His solo exhibition Observing Energies opened at Emmanuel College in Boston in January 2015. Daniel is represented by Blank Space Gallery in New York. He lives in Berkley, Massachusetts.

OtherPeoplesPixels: Portraiture is one of the very oldest genres of art. Why is it still relevant today?

Daniel Kornrumpf: Portraiture remains relevant for so many reasons. The human figure is a recognizable, universally relatable subject, no matter how realistic or minimally abstract the person is depicted. Through fashion and through the application of material, portraits can speak to the zeitgeist of a certain era. Portraits will continue to be relevant as long as they offer some record or document that speaks to the time period in which they were created. The most interesting portraits tell more about the artists who created them and their way of seeing than about the personality or likeness of the individual they’re depicting. 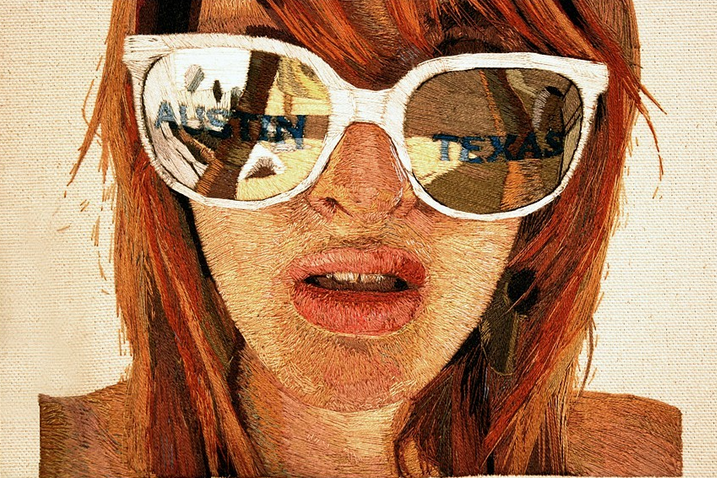 OPP: You paint portraits and embroider them. What's the distinction for you in terms of subject? Who becomes an embroidered portrait versus a painted one?

DK: I was trained as an observational painter, and I would ask friends of mine to come and sit in my studio to pose for a painting. As I eventually started to run out of friends, thoughts about other ways to represent the figure entered into my work. In my down time between models, I began drawing people’s portraits from their social media profile photos. I started to think about the ways in which people are connected online and felt that embroidery thread could be a powerful metaphor for this idea of connectedness. The thread of the portrait is the same as the thread of the linen that it is woven in to.

The portraits that I choose to embroider are from images that I have found through countless hours of viewing online profiles, saving photos of people I find attractive, humorous, overly vain or compelling to me in some subjective way. I have never met any of the people I have embroidered. They are all strangers. My desire to connect with these virtual people compels the act of making something physical, an object, developed over time where a different, internal connection has been formed from something intangible.

The people I choose to paint, however, are my close, personal friends and family members. The act of sitting in a room with someone, having conversations that take place over multiple sessions, all while building a painting, is an experience that forces me to slow down and be present, creating a state of awareness that I don’t reach in any other of my other daily experiences.

OPP: This brings up issues of intimacy and agency. When you ask your friends and family to sit for a portrait, they can say no. Do you ask permission to use the likeness of the compelling strangers you find online?

DK: No, I don't ask for permission beforehand. But I have, once the embroidery is finished, sent the person an image of the work. I expect them to be slightly creeped out or confused, but they've always been impressed and grateful, asking me to let them know when or where it will be exhibited.


OPP: Could you talk about the ratio of image scale to canvas scale in the embroidered portraits?

DK: The choice to create small portraits floating in the centers of large stretched canvases was to give the viewer a bit of context as to where the images came from; that it was not only a photographic reference, but one that was appropriated from online. The heads float like computer icons in a non-space similar to that of the computer screen. I also wanted to call attention to the linen as a material, not simply as an armature but as a woven surface, made up of individual threads, similar to the portrait. In addition, the space around the heads help to pull the viewer in to the work, allowing a closer inspection of the more intimate details without the distractions of the edge or supporting wall. 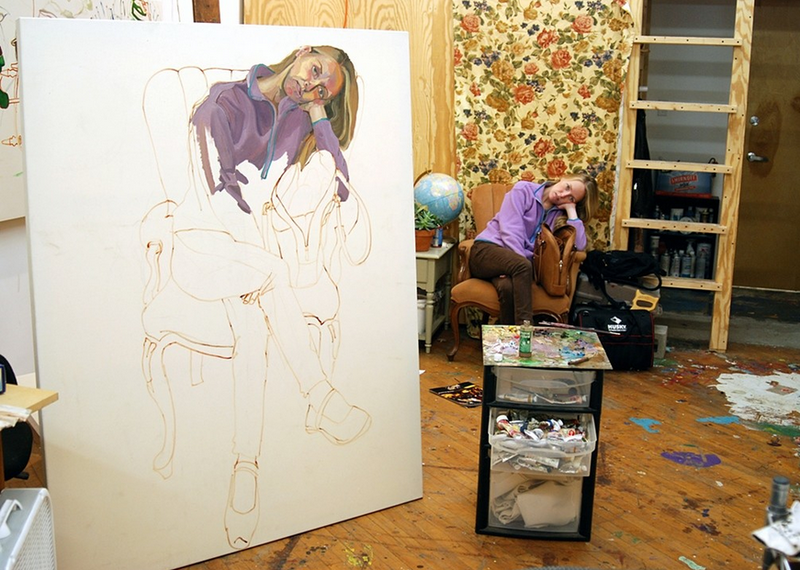 Dena with her purse (in process)

OPP: Empty space also shows up in your painted works. In pieces like Mr. David Lasley (2012), Tom (2007) and Dena with Arms Crossed (2007), the figures are not completely painted in. On the one hand, I think about your conscious decision as the painter to "not finish." But it also reads like the color has been drained from the person or that the figure is disappearing in some places. How do you think about the transparency in these pieces?

DK: The unpainted areas in the paintings do a few different things for me. For one, there is a “matter-of-factness” to some of the outcomes. For instance, in the painting Tom (2007), he could only pose for two hours, so what is shown is all I was able to get on the canvas in that window of time. I enjoy that element of urgency and spontaneity, and it showcases what I find to be priority in a portrait.

I also value artists that let you see their process in their paintings like Paul Cezanne, Alice Neel, or George Baselitz. The unpainted areas in my work allows the viewer to see the tricks or steps that go into creating an image: the evidence of drawing, the correcting or restating of a pose or gesture. They also create moments for visual rest or places to “breathe” in the painting. I find that when I make paintings that cover the entire surface, it not only hides my process but removes some of the life in the painting, zapping some of that spontaneous energy that I’m trying to preserve. 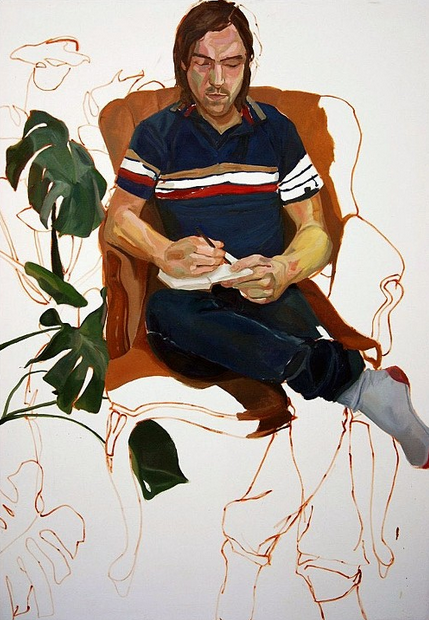 OPP: What's going on in your studio right now? Any new work in progress?

DK: I just completed an eight month fellowship at the Pennsylvania Academy of the Fine Arts that ended in June. It was a very productive year and I was able to make new paintings and reconnect with friends that I haven’t seen in awhile. I have a few exhibitions in the works this winter, one at Simmons College in Boston and one in Cambridge, Massachusetts, both of which will be exhibiting some new embroideries that I have recently started. My work is represented through Blank Space Gallery in New York so if you are interested in owning one of my pieces please contact them and please check back soon for some new work on my website. And thank you to OPP for creating an easy to use, professional looking platform to showcase what I make! 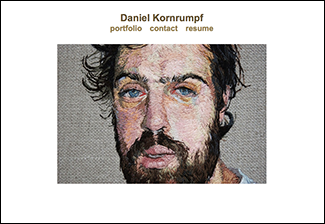