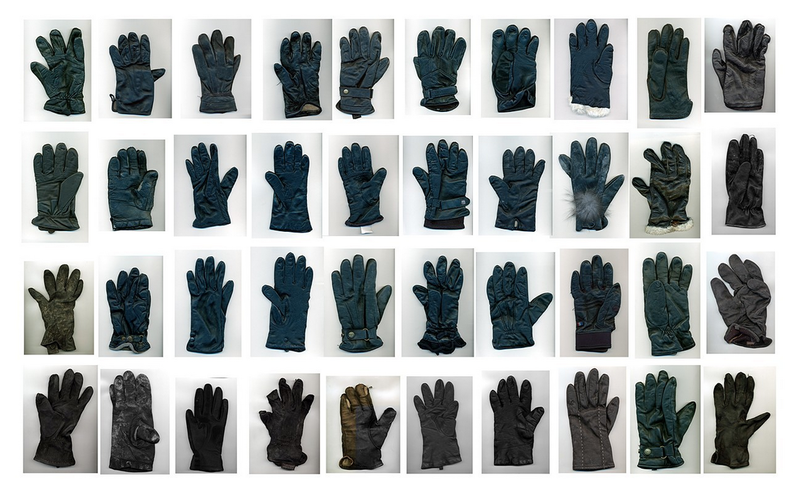 Sinister
2012
A black leather glove was stolen from the office of the director of the MFA program at NSCAD. While I never admitted to having taken it, the program director was convinced that I was the culprit, even after the glove was anonymously returned to his home mailbox. I have since collected black leather gloves found on the street, and am anonymously mailing these one by one to his house.

JOSHUA SCHWEBEL repeatedly uses the strategies of displacement, redirection, impersonation and counterfeit in his conceptual, action-based practice. Whether he is leaving counterfeit missed delivery slips on the doors of art galleries, submitting exhibition proposals "on behalf of" other artists or paying people to visit a Montreal art gallery in order to skew attendance statistics, his projects often have the feel of art-world pranks while simultaneously calling into question our perceived distinctions between fiction and reality, as well as expectation and actual outcome. Joshua earned his BFA from Concordia University in 2006 and his MFA from Nova Scotia College of Art and Design in 2008. Recent solo exhibitions include [Caché] at AKA Artist-Run (2014) in Saskatoon, Saskatchewan and Artspace (2013) in Petersborough, Ontario, and Micah Lexier (2012) at articule (Montreal, Quebec). In January 2015, Joshua began a year-long residency at the Künstlerhaus Bethanien in Berlin, representing the province of Quebec, where he usually calls home.

OtherPeoplesPixels: Do you relate to the archetype of the Trickster?

Joshua Schwebel: I am really interested in shifting the ways that information refers to reality, and in so doing, constitutes the reality of the “real.” In much of my work, I try to shift or displace the relationship between information and reality, to show how our experience of what “is” is constructed by our anticipation of that expected reality. That being said, I do not identify with The Trickster even though my work has been labeled this way before. The Trickster archetype is expropriated from Indigenous and First Nations mythology, and since I have respect for other cultures’ symbolic integrity, I cannot accept this label. It perpetuates a problematic and privileged ignorance to pick and choose from cultural symbols. 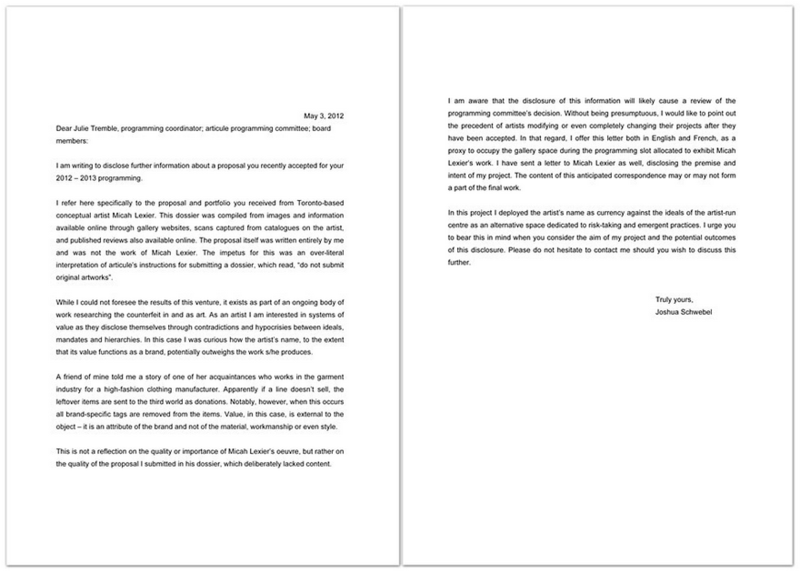 Letter to articule director (from Please Do Not Submit Original Works)
2014
Once learning that my imposter-submission had been accepted, I knew that I would have to disclose my action and the reasoning behind it, so I sent this letter to Julie Tremble, director of articule.

OPP: For Presentation: MFA Thesis Project (2008), you perpetrated to be working intensely on a tangible sculpture only to end up presenting nothing at the opening. In retrospect, you had been working on a year-long performance about anticipation and expectation. You were working the entire year, just not in the way people thought. Were you surprised by the response?

JS: I really enjoyed that project and felt a lot of energy and excitement while preparing for the public encounter with the (absent) work. I wasn’t expecting that people would misunderstand the project or would respond negatively to it. However, students and faculty both reacted quite strongly, and their reactions were surprising. I remember feeling in a bit of a panic over how the atmosphere in the school suddenly shifted. Before the show, I was a relatively unremarkable student, whereas, during and after the show, I found that I had ignited very strong reactions. This was exhilarating, because I really want to make work that creates a reaction, but also, like I said, unexpected. I wanted to create that reaction, but I didn’t anticipate how it would feel for me to be identified as the source of this reaction. 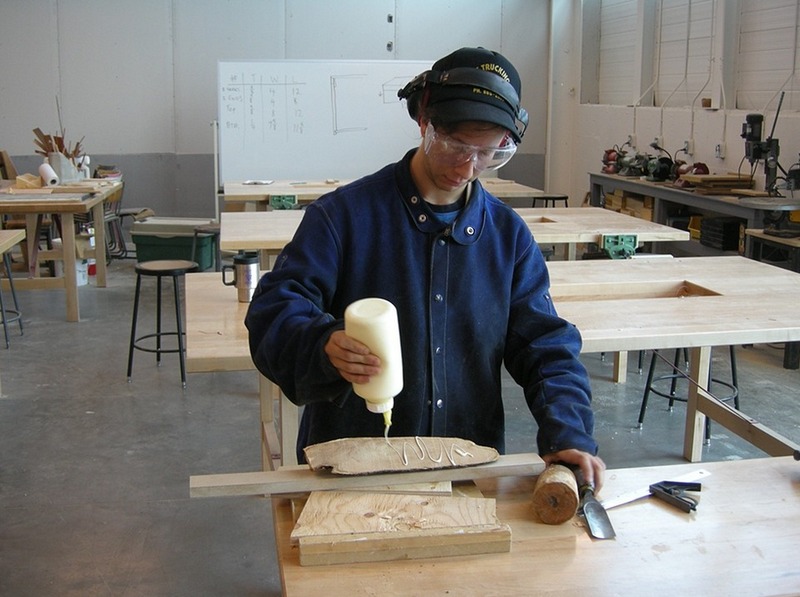 Working (part of Presentation: MFA Thesis Project)
2007
A series of digital photos in which the artist is "working."
Photo Credit: Cam Matamoros

OPP: Can you describe the reactions more specifically?

JS: I prefer not to focus on people’s reactions without more carefully considering the stakes or factors within the work. Setting up my work as provocative of negative reactions reduces what I am doing to how people react to what I'm doing. In many of my works, nobody reacts, or there is no public. I do not consider these works any less interesting or deliberate!

To focus on emotional reactions overlooks the significant risk that I invest personally in enacting a work. For me, the type of critique I am pursuing also deliberately and necessarily involves deep personal risk. This is because I am part of the system, and I can only critique the system as a part of it. However, this means that I also cannot escape the impact of it, and must also examine my own investment in the system and culpability for its flaws while showing how corrupt and inadequate it is. In the case of the MFA project, I was risking my degree. I was daring the faculty and the committee to specify the conditions by which the MFA is granted, by potentially failing the degree as a result of my project's demonstration of the degree's bankruptcy. 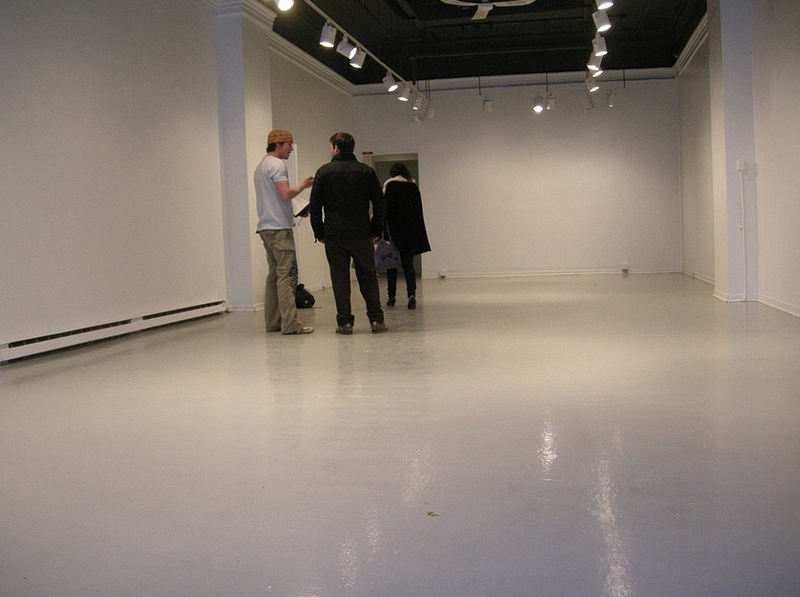 OPP: How does the challenge of human emotion aid or obstruct your conceptual agenda?

JS: I am interested in provoking and upsetting systems and social constructs. If people are so attached to these systems and processes that they become upset when I apply pressure to an unexamined aspect of a system, their reaction is only part of the work insofar as it elaborates the limits of the social system I am addressing. I am interested in how people protect systems, and how limits can be articulated by these protective behaviors.

Sometimes people get angry, but this is not the goal of my work. It's merely a byproduct. My intention is to create an intellectual disconnect: I am engaged in challenging values that privilege certain forms of encounter. Sometimes when values are challenged, people react emotionally, and I think in these cases, emotions are an expression of frustration or misunderstanding. But I am not trying to hurt anybody, just make them reconsider what they think, or indicate certain circumstances in which they act or react without thinking.

OPP: How has your MFA project affected the trajectory of your work since then?

JS: I have been refining many of the themes I discovered through that work: the relationship between expectation and absence, the circulation of the fictive or counterfeit and how the art gallery can turn anything into art, since it both signifies and neutralizes all content. Since then, I have looked more closely at these themes, finding new connections and permutations in so doing. Looking back at the project, it still feels familiar and exciting to me since it opened up a large territory of concepts, which I’m still exploring. 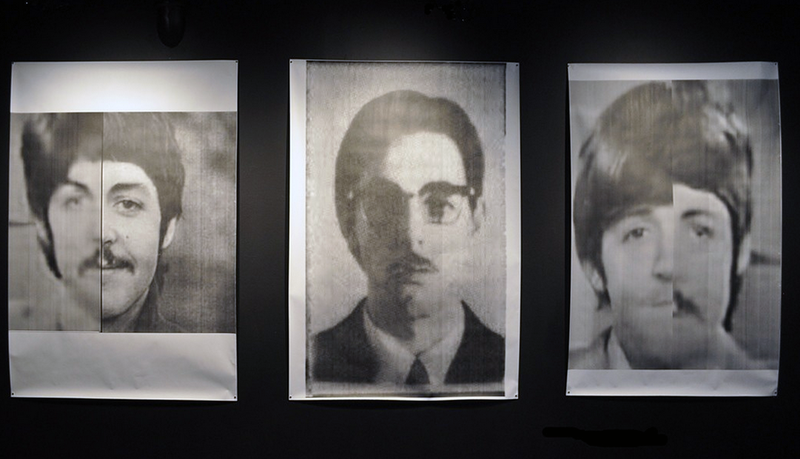 OPP: Impersonation is a staple strategy for you. In Please Do Not Submit Original Works (2012), you submitted a proposal for an exhibition to the gallery articule "on behalf of" Canadian conceptual artist Micah Lexier. In Vertigo: Between the Deaths (2009), you hired an actor to impersonate you in both your personal and professional life. Fonograph (2011) examines "the conspiracy theory that Paul McCartney of the Beatles died in a car crash in 1966 and was replaced by an impostor." Could you talk generally about your interest in impersonation?

JS: This is a difficult question, because impersonation is so central to my practice. The more I work with the concept, the further it leads me. Part of my work is a critique of the cult of the artist’s name, and how, as artists, it seems less important to produce any ‘thing’ as it is to produce and circulate our names. Disturbing the artist-brand is sacrilegious, and impersonation is a technique to achieve this disturbance. Another aspect involves the debates around performance art and documentation, and how the live event of performance is made permanent (and no longer live) by its documentation. I see an analogy between the performance document and the role of the impostor or impersonator. I am conceptually attracted to any value system that both requires and denigrates a substitute, impersonation being one expression of this. 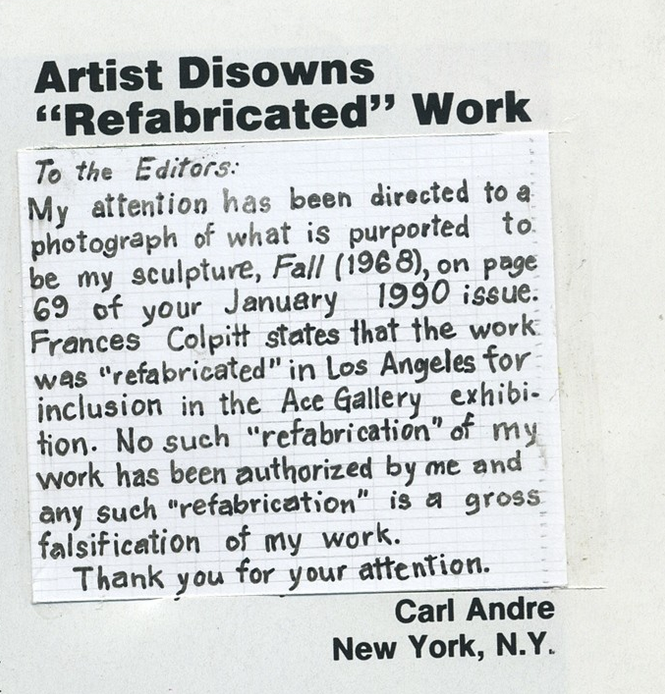 "Fall": refabrication
2010
Pen and ink
I found a letter to the editor of Art in America written by Carl Andre denouncing an unauthorized reproduction of his (mechanically produced) work. I reproduced this letter by hand, and inserted my hand-written copy in the place of the printed letter. I left the magazine in the archives of a library (location undisclosed).

OPP: Is there a meaningful distinction between these impersonations of individuals and your hand-drawn versions of mass-produced printed material in projects like How to Get Into A Major Museum Collection (2012) and Circulaire (2014) or "Fall:" refabrication (2010)?

JS: Not really. I see the drawing work as a direct extension of my interest in impersonation. Both impersonation and drawing stem from a fascination with identity as construction, and  both attempt to study how our personal claims to identity (which we believe to be knowable, visible, self-contained and rational) are haunted by the non-transparent, incomprehensible, secretive and fragmentary. My drawn work is intended to exist as counterfeit. The counterfeit is fundamentally but invisibly different from the authentic object. However, to function as counterfeits, rather than technically sophisticated replicas, they must be circulated as everyday objects amongst everyday objects. The disruption they might enact can only operate in circulation. 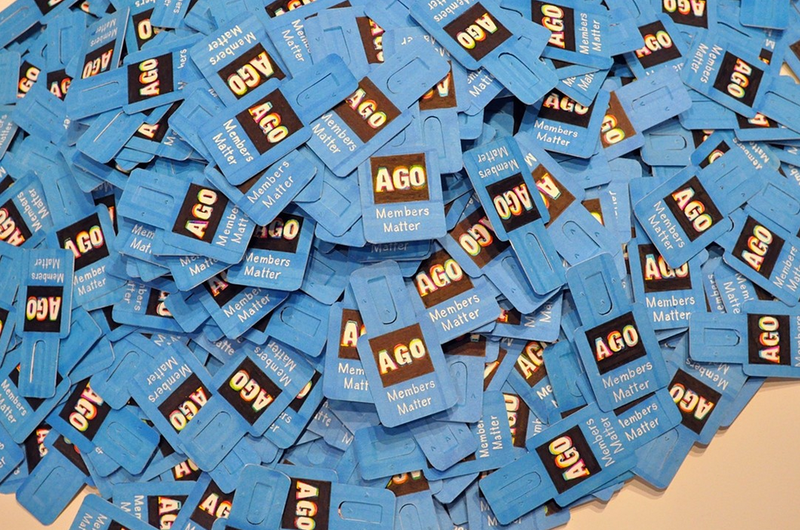 OPP: Let's talk about the practicalities of documentation as it relates to funding and exhibition proposals. In most cases, one must read a lot to understand your work, which can count against an artist when decisions are made by panels. How have your methods of documenting your work changed over time? Any advice for other conceptual artists whose work does not have a prominent visual component?

JS: I struggle occasionally with the limited attention span of juries and the conservative structures of portfolio submissions. I am not by any means the first artist to work with context-specific work or to evacuate meaning or aesthetic appeal from the image. It bothers me that juried submissions presuppose an image-centric practice. I think the wrong approach is to change one’s work to meet these institutional expectations. I am sure that my career suffers from this position, but I am pretty hard-headed about what my work is and what it isn’t. The work requires explanation, and thought, which I am not willing to abandon or compromise. For other artists, my advice is to keep being stubborn and keep being patient. 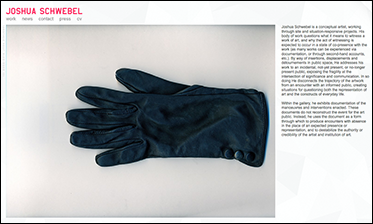