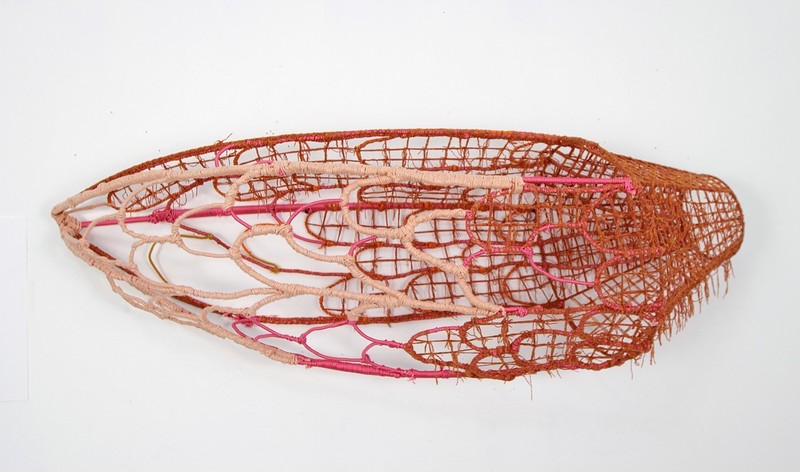 COURTNEY PUCKETT’s work is an exciting collision of color, pattern and texture. Drawing on the history of the Fiber Art Movement, she employs traditional techniques such as wrapping, coiling and sewing to transform cast-off elements from furniture and domestic decoration—frames, fans, coat racks, table cloths—into unexpected abstractions. Courtney earned her BFA from Maryland Institute College of Art (2002) and her MFA from Hunter College (2007). She is a recipient of several National Endowment for the Arts project grants and has been an Artist-in-Residence at Vermont Studio Center, Buffalo National River in Arkansas and the Byrdcliffe Arts Colony in Woodstock, New York. Solo exhibitions include Mountain High (2011) at Central Utah Art Center in Ephraim, Utah and Recycled, Wrapped and Sewn (2010) at Valencia Community College’s Anita Wooten Gallery in Orlando, Florida. Courtney lives and works in Brooklyn, New York.

OtherPeoplesPixels: Your sculptures oscillate between formal abstraction—for example, Bug (2011) or Snail Potion (2012)—and "useful" objects, as in the walking sticks and lassos. But in both cases, textile materials and the traditional fiber techniques of coiling and wrapping are center stage. Could you talk generally about your interest in these techniques?

Courtney Puckett: Before I knew about the Fiber Art movement, I studied painting. As an undergraduate, I had reached a technical level of realistic painting that no longer interested me. I could have continued in this vein and found subjects to paint or forced myself towards abstraction. But instead I made a discovery that permanently subordinated paint as a medium for me. While experimenting with alternative painting surfaces, I came across a large, ripped, black duffel bag. With the intention of painting on it, I cut it up and sewed it back together flat. But when I hung it on the wall, I knew it didn’t need paint. The form and physical material already had everything in it that I was searching for. It satisfied my desire to find an alternative approach to painting and to align myself with women artists, particularly those in the 60s and 70s who challenged the (predominantly-masculine) rules of painting. What began as an intuitive gravitational pull toward soft materials has become a intentional reframing of techniques associated with “women’s work” in order to disrupt hierarchical and categorical divisions within art. 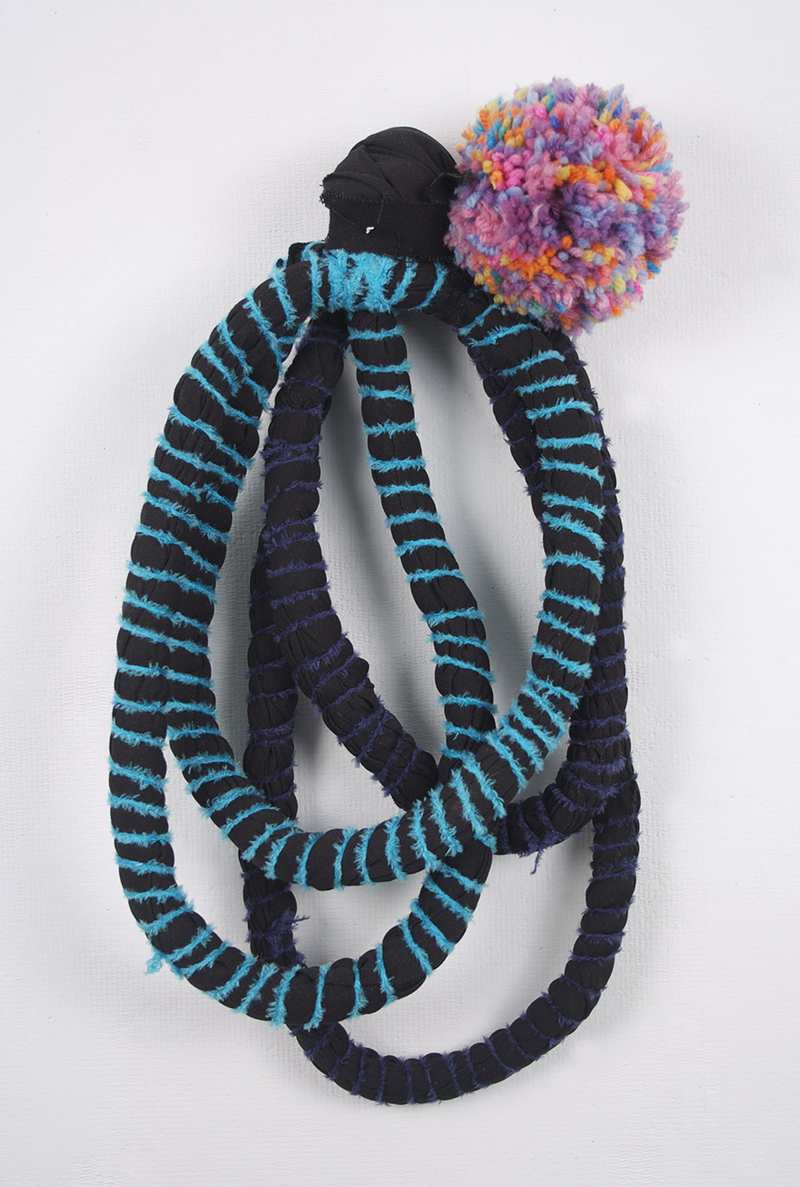 OPP: Could you talk specifically about your Lasso Series (2004-ongoing) Is your attraction to this form conceptual or formal? What does the lasso as a form mean to you?

CP: I began the Lasso Series in 2004 while living in New Mexico. I recycled scraps of unused fabric and discarded components from sculptures into long, coiled ropes and hung them in groups on the wall. The lasso is a metaphor for our persistent attempts to acquire, achieve, control, fulfill, capture. But often we fail. These aren’t Wonder Woman’s Golden Lasso.

OPP: Looking at all the lassos together reminds me of Sheila Hicks' amazing book Weaving as Metaphor, in that she has a daily practice of exploring the aesthetics of one simple form—for her, the handheld loom. The variety is astounding. Sheila Hicks is probably the most well known artist who uses coiling and wrapping as a technique. Is she an influence for you?

CP: It is exciting that Sheila Hicks is receiving so much attention right now. I went straight to her work at the Whitney Biennial. However, I only found out about her work about five or six years ago. I took a bus to the Institute of Contemporary Art in Philadelphia to see her 2011 retrospective, which was the first time I saw her work in person. I was totally jazzed. At that moment, I felt very proud to make the work I make. Her work gave me the permission—that for years I thought I needed—to work primarily with fabric and textile techniques. People have suggested to me a more mixed media approach, so as to not get labeled or pigeonholed. But Sheila Hicks’s work is powerful in its embrace of fiber mediums and disregard of categorization.

OPP: What role does time-tracking play in your work?

CP: The act of recording time is not an objective. My goal is more to lose track of time and enter a meditative, quiet, contemplative zone, often with nothing to listen to but the sounds outside my studio window. Time is obviously quite evident in the process; the labor evident in the work. This is more a result of the kind of intuitive physical relationship I have with the materials and processes—cutting, pasting, ripping, knotting—than as a subject itself. I like that the viewer has access to this intimate space that rewards slower reading.

OPP: Could you talk about your drawings on graph paper? Many of them are titled “Study for . . . .” Are the drawings just plans for the sculptures or something else?

CP: The drawings are like epilogues of the sculptures; they only reveal segments of the story. Typically, I do not begin with drawing. When I get lost or am not sure what move to make while working on the sculptures, I draw. It either sends me off in a new direction or helps me find my way back to the original logic of a piece. I think two-dimensionally like a painter, and drawing really helps to flatten things out. Recently, graph paper has been the most useful blank page for working out patterns and formal systems. 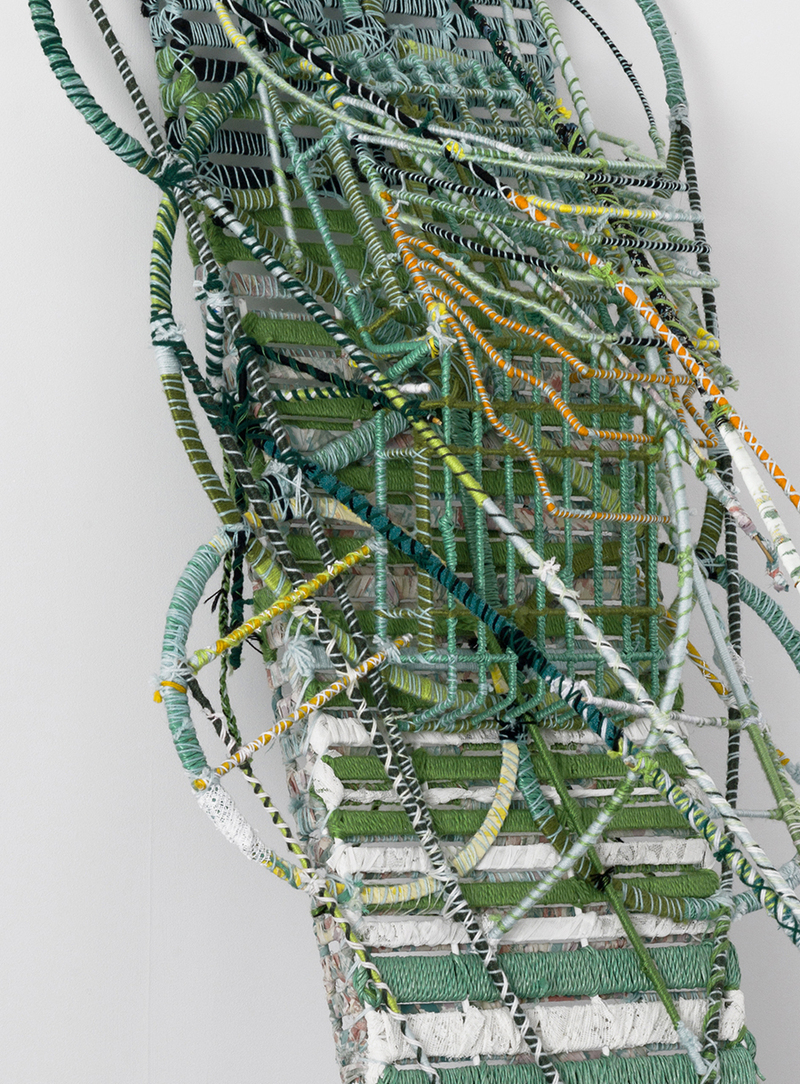 OPP: Materiality is clearly a driving force in your practice. You incorporate fabric, thread, wood, wire, yarn and found textiles like table cloths and men's ties. Are you more of a hunter, seeking out specific materials for your work, or a gather, saving whatever comes your way until you have a use for it?

CP: Both roles as you describe them appeal to me. I have been scavenging thrift stores for cast-off gems since the age of twelve before vintage stores popped up everywhere. It is still one of my favorite things to do when traveling to new places. Red, White & Blue Thrift outside of Trenton, New Jersey, where I teach, is one of the best I have ever been to. I have fantasies about supermarket sweeps there. I hunt cast-offs (usually textiles) that have aesthetic value and character that can play into one of my pieces. Often, I take in the trashed furniture parts from the alleys around my live/work space in Brooklyn. It is important for me to have plentiful fabric and furniture scraps on hand for spur of the moment re-workings. I’m not a hoarder though, and I do take time to toss things back to the curb.

OPP: Could you speak generally about this reworking of cast-offs you’ve mentioned? It’s more than a practical way to get materials or a clever way to recycle. How does this relate to the “reframing of techniques associated with ‘women’s work’”?

CP: I am drawn to art that recycles waste, that makes something extraordinary out of something ordinary, that examines the detritus of everyday life and, in particular, of domestic life. One early influence for me was Art Povera. I will never forget, while studying in the south of France, seeing Dieter Roth’s boiled-over stove at a museum. This was around the time I stopped painting and started using the refuse around me. Another important influence has been my mother, an interior designer, and the home I grew up in, which was an evolving experiment in the decorative arts. There was little distinction between material object and aesthetic experience. Her resourcefulness and creativity built a colorful living space for our family and special, meaningful objects that held a kind of magic. With sculpture you can use the physical, tactile energy of things. You can also transform them. In my work, I try to reconcile the perceived inferiority of fiber and craft materials with the assumed superiority of paint, concrete, steel and the still-hyper-masculine disciplines of painting and sculpture. 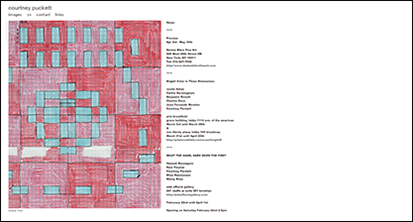