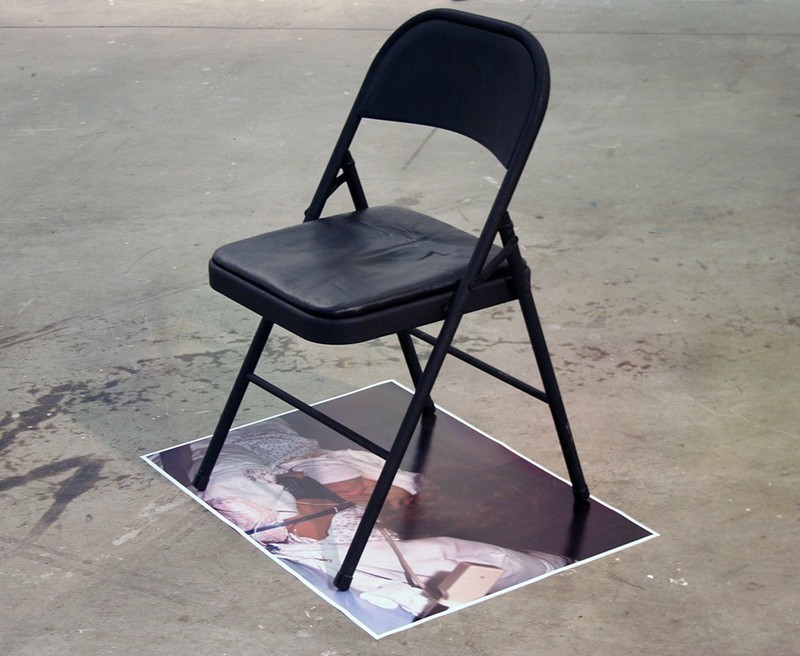 AC WILSON’s arrangements of found objects—clippings from newspapers, beds, taxidermy animals, magician's tools—evoke absence, tragedy and loss. He uses these objects as props, barely manipulating them, except through their placement, allowing ambiguous narratives to emerge. AC received his BFA in sculpture from the University of Tennessee in 2012 and attended the Summer Studio Program at Virginia Commonwealth University in 2013. He has exhibited at University of Tennessee Downtown Gallery, Flourescent Gallery, Knoxville Museum of Art and Virginia Commonwealth University. In December 2014, he exhibited in the group show Fresh Punch at the artist-run Era VI VII VI in Queens, New York. AC lives and works in Richmond, Virginia.

OtherPeoplesPixels: In your artist statement, you say, ""My work deals with tragedy, failure, and fate. The work speaks softly, under the guise of familiar objects and simple or clichéd symbolism. Under that surface lies a violent undercurrent of doubt, regret, and confusion." Could you talk generally about cliché and how you use it to address these themes?

AC Wilson: A majority of my work is influenced by my mother’s death from leukemia in 2010. At the time, I had two more years at the University of Tennessee and decided it would be healthy to make work about what I was going through. Tragedy is closely tied to failure—the failure to prevent it or the idea that life has failed or cheated you in some way. My personal tragedy was difficult in that there was no one I could blame. Fate had prescribed this tragedy on a genetic level I cannot understand, and I have nothing but gratitude for the incredible medical care that attempted to stop it. This left me with some anger and nowhere to direct it. The whole ordeal was and still is confusing to me.

There is a danger of alienating the audience in making work that is too specifically personal. I want my audience to be able to relate to the work whether or not they have experienced something similar. In order to bridge this gap, I use familiar objects and simple metaphors in my arrangements. It allows the work to be more approachable and less daunting to investigate. This is where cliché becomes a tool. It allows me to use a vocabulary of metaphor and meaning in objects that has already been well established. For instance, in Rut (2012), I am working off of the cliché of ducklings following their mother in a line. I’m able to subvert this however by removing the maternal figure and looping the line into a circle. Then, the work can have a more complicated discussion about personal loss and loss in direction without my having to explain what the objects mean. 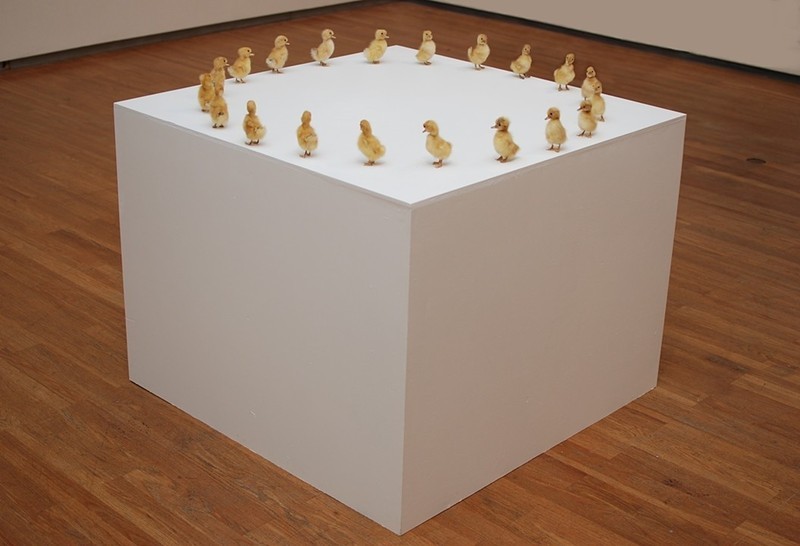 OPP: The dominant characteristic in your work is evocative simplicity in the arrangement of found objects. What's your process like? Do pieces come to you like fully-formed visions or do you move things around until they make sense?

ACW: Early on in school, I was drawn to the clean aesthetic of artists like Tom Friedman, Damien Hirst and Jason Dodge. There was something about their tone that seemed unattainable and supernatural to me.

With a clear standard in mind, I began working methodically to bring these elements into my own work. I wanted to use a light touch and to do the most with the least. Using objects that already exist affords me that ability. I simply compose objects and allow the relationships between them to be the basis of the expression. The nature of our everyday material surroundings allows one to understand and relate better to the physical presence of an object rather than a drawing or other iteration of the same object. Titling a work is also an important opportunity to influence the relationship between object and idea.

I began to put other limitations—to only use objects a child could understand or to use no more than two or three basic components—on myself, which propelled my work to a new level. At the time, I would spend a considerable amount of time with an idea, generally only working through sketches. When I thought it was ready, I would execute it, knowing how I wanted it to look.

While this may have created more succinct, confident work, I realized the potential for missed opportunities with this approach. These limitations began to inhibit my possibilities at a certain point. More and more, I’m allowing accidents and experimentation to happen, sketching with physical objects and materials. I’m surrounding myself with things I want to work with and getting out of my comfort zone, allowing uncertainty to be involved. 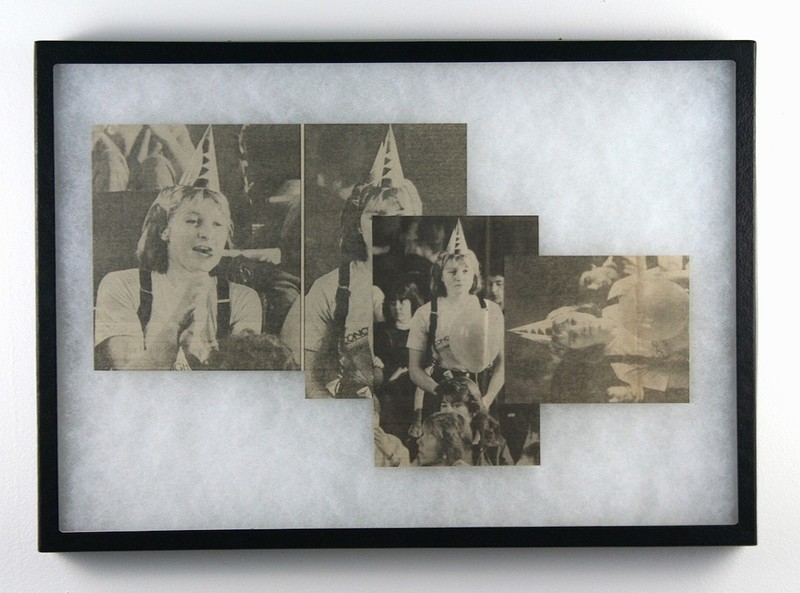 OPP: You've made several recent pieces using clips from the 1986 Challenger Space Shuttle explosion, including Aftermath (2013). It's been almost 20 years. Do you remember the day the shuttle exploded? Why use such a distant tragedy, when there are so many recent tragedies—I'm thinking of all the school shootings in recent years?

ACW: The Challenger Space Shuttle explosion occurred three years before I was born. There are multiple reasons I use this event as a vehicle to talk about tragedy. First, it is difficult to find a tragedy on such a grand scale that doesn't involve a clear villain or carry other baggage. A tragedy such as a school shooting prompts conversations about gun control, the state of mental health care and the media’s coverage of the shooters. The Challenger Space Shuttle explosion is unique in that is boils down to an accident. While NASA is to blame for their incompetence regarding the faulty design of the O-Rings, they were under an immense amount of pressure to expedite an already delayed launch. In addition to that, flawed judgement doesn’t not come from a place of malice. It really was just a terrible accident.

What compounds this tragedy is the involvement of Christa McAuliffe, an American school teacher who was the first to be selected as a part of the NASA Teacher in Space program. Due to her involvement, the shuttle launch was broadcast in classrooms all over America. For many young people, this was an introduction to tragedy and loss, a loss of innocence. 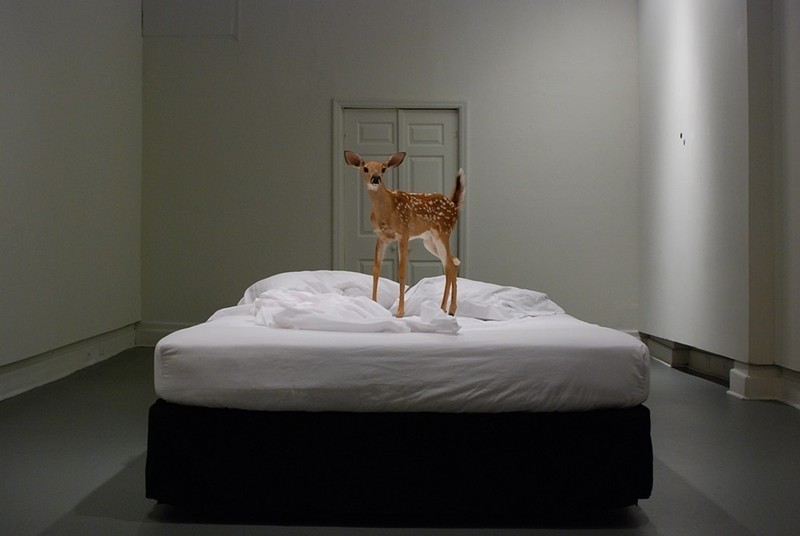 What happens when you die
2011
Taxidermy fawn, bed, cremation tag

OPP: I'm curious about your series Impossible Objects (2010)—are these photographs or installations?

ACW: The Impossible Objects are actual physical installations inspired by a few sources. Most notably, they are tied to the concept of an impossible bottle. These can range from the classic ship in a bottle to more complex feats, such as the work of Harry Eng. What fascinates me about these bottles is their ability to maintain a real sense of curiosity without relying on any movement whatsoever.

I come from a background in illusionary magic, which relates to the idea of a puzzle, but is not the same. While a puzzle requires a solution to a problem, the strength of magic relies more on wondering, “How is it done?” Knowing how a trick is performed removes all of its power. In this series, I mainly focused on the illusion of penetration or “solid-through-solid.” Tire on Pole, for example, is basically a variation on the linking ring illusion.

Lastly, the series references the absurd nature of pranks, namely, the Cornell University’s Pumpkin Prank of 1998, in which a pumpkin was inexplicable placed atop Cornell’s 173-foot McGraw tower. Like the Cornell pumpkin prank, the installations were easy to overlook, but hidden in plain sight. However, once noticed or pointed out, their nonsensical and sometimes daring execution elicits humor. A nice tension exists between a dismissive “Why would someone do that?” and an impressed “How did someone do that?” 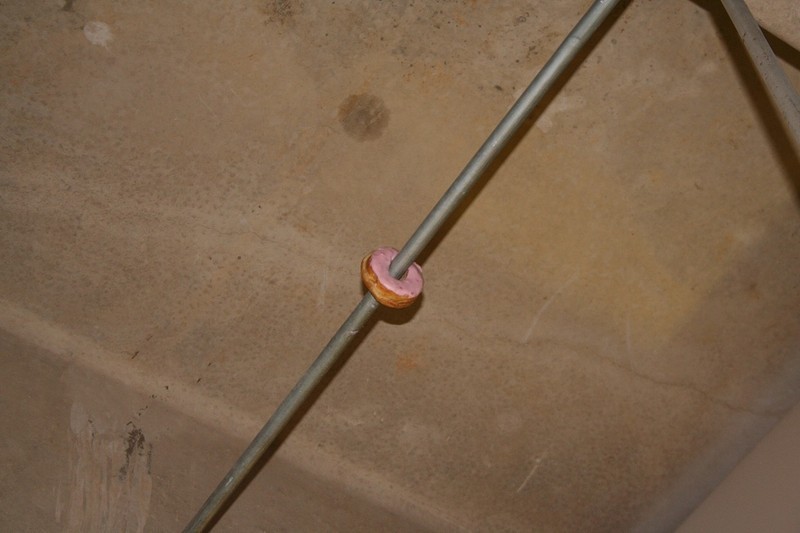 Donut on pole
2010
Donut, from the series Impossible Objects

OPP: You earned your BFA in 2012 from the University of Tennessee, Knoxville and went on to do the Summer Studio Program at Virginia Commonwealth University on 2013. Tell us a little bit about that program and why you decided to go. How has it affected your practice?

ACW: I had an incredible experience working toward my BFA at the University of Tennessee. After graduation, as many artists can attest, it can be  difficult to maintain momentum and balance a studio practice and real life responsibilities. School offers a real sounding board by way of critiques, visiting artists and faculty mentorship. Not having that can foster some insecurities about the direction of your work.

Having worked full-time during school and after, I needed some time to sort things out. As a part of the visiting artist program at UT, I had a studio visit with Michael Jones McKean, an Associate Professor at VCU. The visit was productive. When I heard about the VCU Summer Studio program, I was looking forward to working with him again. The VCU Summer Studio program offered a great opportunity to spend eight weeks focusing on my work, surrounded by a group of talented artists who were at similar points in their careers. It was an extremely motivating experience.

Being in a new environment, I felt permission to bend some of my own rules and make decisions I might not have otherwise. A good example of this is Mother and child. The piece involves two parts: an enlarged photograph of my mother nursing me right after my birth and a black folding chair with a permanent impression in the seat. Both of these parts are fabricated or modified. While the photograph wasn’t manipulated, it was enlarged for formal reasons. The chair was modified by soaking the seat cushion in plaster, re-upholstering it, and sitting on it until it hardened. While normally I try not to modify objects, my goals for this piece couldn't have been realized without doing so. That being said, I tried to involve my hand as little as possible, to retain a sense of honesty in material. This has led to more possibilities for me, including collage and other forms of fabrication. I have more creative freedom as a result of the program; now I just have to decide where to go with it. 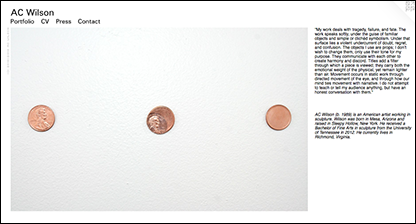 To see more of AC's work, please visit ac-wilson.com.
Featured Artist Interviews are conducted by Chicago-based, interdisciplinary artist Stacia Yeapanis. When she’s not writing for OPP, Stacia explores the relationship between repetition, desire and impermanence in cross-stitch embroideries, remix video, collage and impermanent installations. She is an instructor in the Department of Fiber and Material Studies at The School of the Art Institute of Chicago, where received her MFA in 2006, and was a 2012-2013 Mentor-in-Residence at BOLT in Chicago. Recent exhibitions include solo shows I Still Haven’t Found What I’m Looking For (2013) at Klemm Gallery, Siena Heights University (Adrian, Michigan) and Everything You Need is Already Here (2014) at Heaven Gallery in Chicago, as well as Here|Now, a two-person exhibition curated by MK Meador and also featuring the work of Jason Uriah White, at Design Cloud in Chicago (2014). Most recently, Stacia created When Things Fall Apart, a durational, collage installation in the Annex Gallery at Lillstreet Art Center. Closing reception guests were invited to help break down the piece by pulling pins out of the wall.