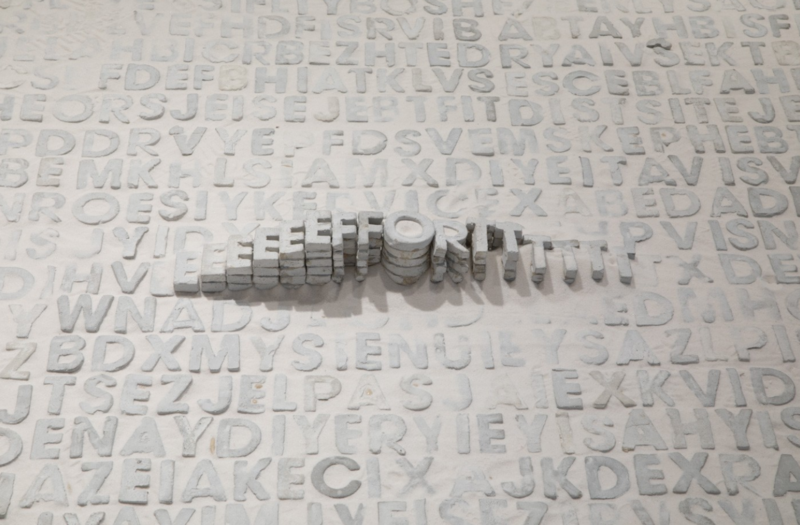 CHRISTOS PANTIERAS transforms digital communication—emails, text messages, and chat conversations from gay hook-up apps—into tangible sculpture through the very slow processes of casting, carving and embossing. He gives weight  to these words, often typed casually and quickly, and forces the viewer to slow down in considering the lasting effects of all communication on the receiver. Christos earned his BFA at University of Ottawa in 1996 and went on to earn his MFA at York University, Toronto in 2015. Christos has exhibited widely throughout Quebec and Ontario and recently received a Municipal Grant from the City of Ottawa. His solo show Am I Worth It? is on view at Circa-Art Actuel in Montreal through September 9, 2017 and will be shown again at the Ottawa School of Art in January 2018. He has upcoming solo exhibitions in October 2017 at Art-Cite in Windsor, Ontario and at La Madison de la Culture, Gatineau, Quebec in Summer 2018. Christos lives and works in Ottawa, Ontario, Canada.

OtherPeoplesPixels: How do your material and process choices—cast concrete letters, carved wax and embossed text on various surfaces—support your conceptual interests?

Chris Pantieras: Each choice enhances what I'm communicating in my work. For example, the carved wax bricks of I miss talking to you feature a letter of regret that I received six months after a former partner of mine took off. I used wax recycled from candles people lit in my local church and that are never left to fully burn. I melt down these candle fragments and cure them into new forms, in this case the cast bricks. These bricks, if not physically heavy, doubtless carry the psychic weight of their earlier life as containers of hopes, dreams and contemplation. The final installation took the form of a wall which represents the barrier that was built between myself and my former partner.

Concrete, on the other hand, is bland and references the city. How often does one stop to admire a concrete building? We're surrounded by it, and it is just part of the every day. This plays into how language used on gay hook-up apps has become a non-event. The coded words, abbreviations and statements are a very normal and familiar method of communicating with each other. Additionally, bringing online text offline and making it tangible addresses the materiality of words. To make my letters, I need an aggregate—silica sand in this instance—to to bind the cement together. As a parallel, the individual cast letters represent the aggregate. When they're placed next to each other, they bind together and form a word. 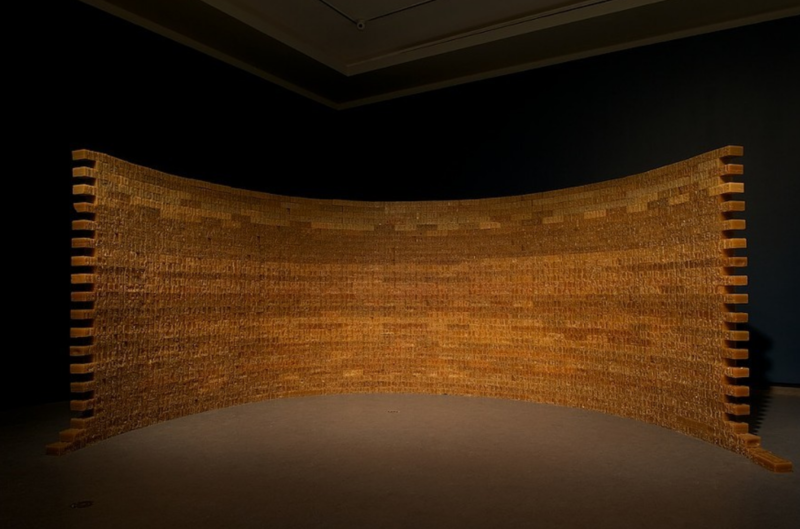 OPP: What about the processes?

CP: My processes are slow and time consuming on purpose, and I thoroughly enjoy the physicality involved in creating most of my work. For me, it's very important to record my presence, and I do this through repetitive acts and accumulation. The text is sourced from a screen; it lacks warmth. Through my methods, I add the human presence. A great example of this is the embossed text in the work Impress Me. Each piece of paper features one email that has been hammered into the surface using old fashioned, metal printing rods. As the viewer reads the papers from left to right, the text becomes more and more illegible as the embossing rips the paper. The viewer focuses less on what is written and more on the transformed material 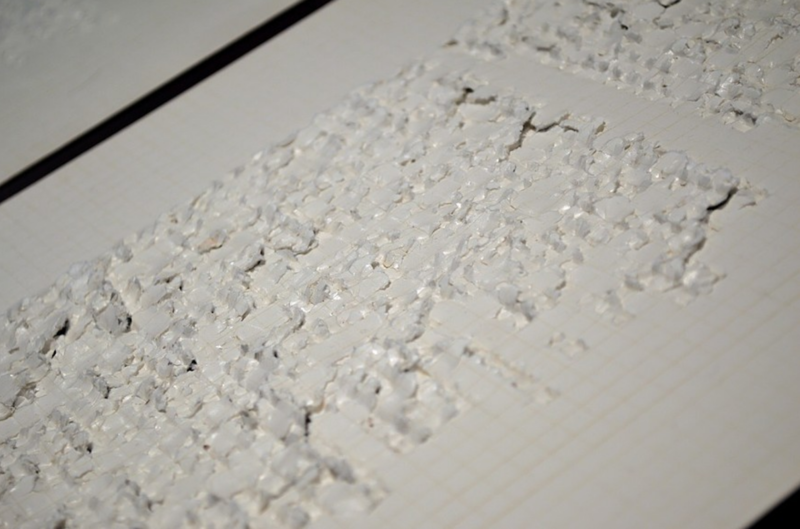 OPP: Most of the text you render through these slow processes relates to dating and lost relationships. Is this work more about the value of slowing down the process of communicating or about the slowness of processing what’s been said after it’s been said?

CP: This is a great question. Firstly, it's important to know a little about the source of the various narratives and where the digital communication comes from. The text I use is either from emails, text messages or interactions on dating/hook-up apps. It is taken directly from my own experiences, encounters and lost/potential relationships. I'm also old enough to remember a time when online dating was very new, perceived as very risky, but was also extremely exciting. Going home to log-in, get online, and check my email was a rush. What people wrote had weight since communicating wasn't as fast and immediate as it is today. Now there's no offline; we're always online. Connecting and interacting with new people is extremely easy, and perhaps that interaction holds less value than it used to.

So, to answer your question, it can be both. My use of analog tools and repetitive processes highlights the contrast between the lack of effort required in my online relationships with the huge amount of commitment and investment it requires of me to make the work. The more recent work uses the language of immediacy from gay hook-up apps, but most of the other pieces were created from emails or text messages that I catalogued and held on to for years. This is an example of how I am processing what's been said, however the way the text will be used manifests later. I kept one email almost ten years before it took physical form. I still have several samples of communication archived in my sketchbooks that may or may not become new work. 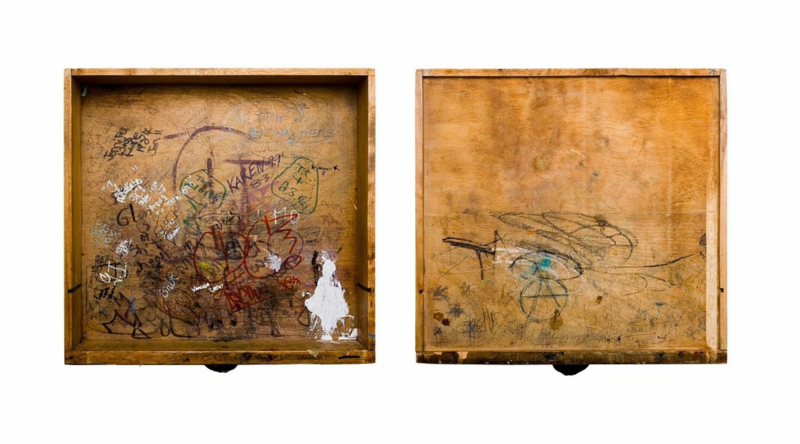 OPP: Your work isn’t just about communication between romantically-engaged individuals. Who Sits Here? (2009) explores the way adolescents communicated via writing inside desk drawers before the ubiquity of handheld digital devices. What does this series reveal about communal communication spaces?

CP: It reveals that individuals can be as candid as they want to be without much concern for accountability. The school desk drawer of yesterday mirrors the forums of today. We contribute, we take it in, we respond. Except for the fact that an identity, whether fictional or real, is attached to the author in today's communication spaces, they are no different in terms of what we communicate and how we respond today. The language is still honest, bare and risky. I love the focus on human presence in the doodles, the various penmanship styles and the carved surfaces. The desk drawers are amazing objects. 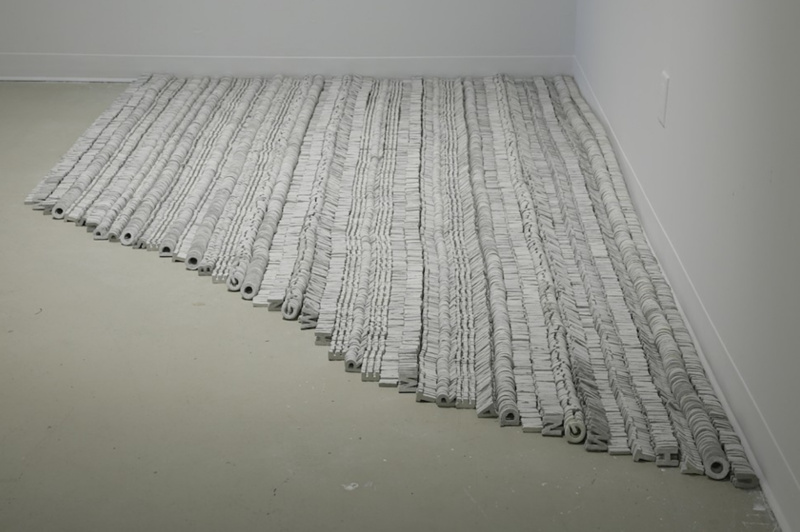 CP: Although my work specifically references my own encounters, I want it to be accessible and relatable to everyone. Yes, they're about my experiences as a gay male, but there's something universal about online dating that goes beyond any limits of sexual preference and orientation. You'll interact with someone who will be kind, respectful and genuine just as easily as someone who is direct, dismissive and crass. I enjoy engaging with people about my work and taking the time to explain where it comes from because it's great to hear them make connections to their own lives and their own experiences. They begin to tell me their stories about dating in the digital era, and I value that vulnerability.

HEY. HORNY. GRRRR. was featured in the Installation Zone at the Artist Project in Toronto in 2015. There were thousands of people there on opening night. It was amazing to see who related to the piece right away and who needed some time. Any gay male that walked by knew exactly what this was and where the language came from. They were not fazed in the least and felt that they were reading their own messages. The complete opposite reaction came from everyone else. They had no idea what they were reading until I explained it to them. Reactions ranged from disbelief about the direct or rude language to, once again, making personal connections and having conversations with me about their own online interactions. 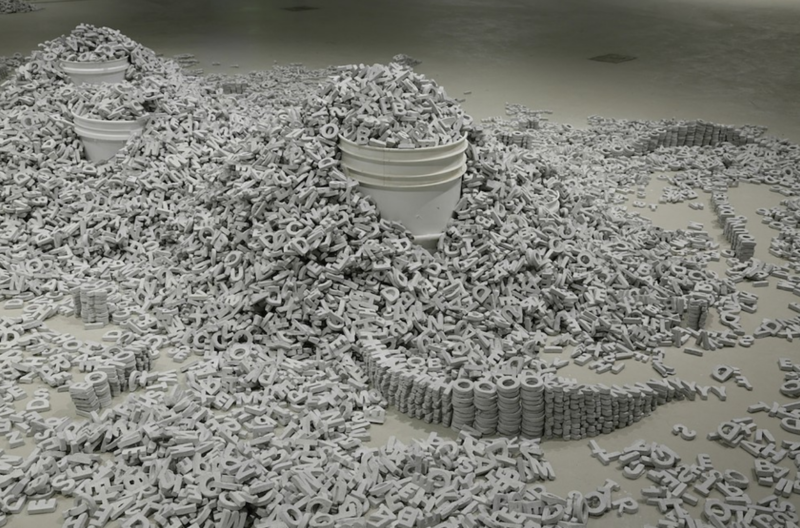 OPP: Your most recent installation Am I Worth It? (2017) is currently on view through September 9, 2017 at Circa Art-Actuel in Montreal, Quebec. I believe this is the first installations in which visitors can walk on the letters. Is that correct?

CP: That is correct. I wanted visitors to have a more direct engagement with my work. By putting them in a position where they have to walk on the art in order to take it in, I get to offer a different experience for each visitor. 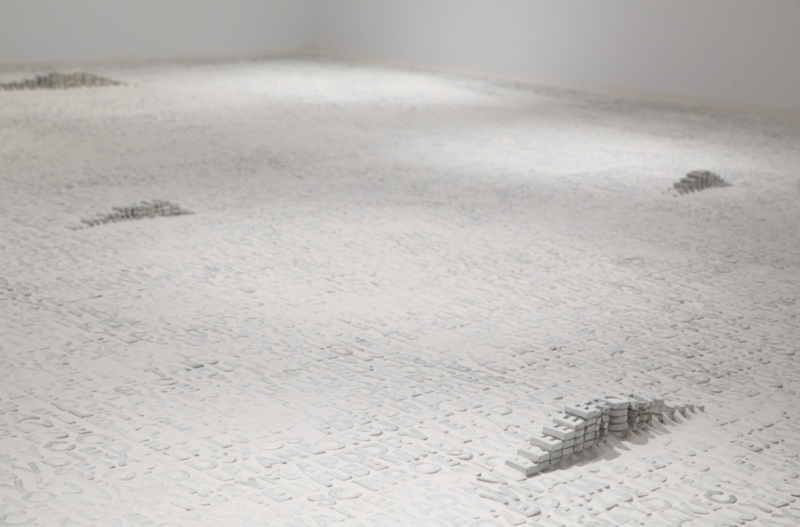 Am I Worth It? 2017. Sourced text message, letters cast in concrete, silica sand, subfloor. Dimensions Variable

OPP: How does the title relate to the raised text in this floor of letters?

CP: The title Am I Worth It? is answered by the raised text that spells out the statement: I'm not willing to make the effort. Like many of my pieces before, the text is sourced from a relationship that had a lot of potential. But he wasn't willing to invest in it since it was long-distance, and I was moving even further away to complete my MFA. The sentence plays off the fact that this installation took a lot of personal commitment to complete. The floor is tiled with thousands of cast-concrete letters laid out like a giant word search. I chose to reveal the statement intermittently, pushing up from the jumble of letters, almost like they're trying to make themselves be noticed, or conversely, about to be buried. 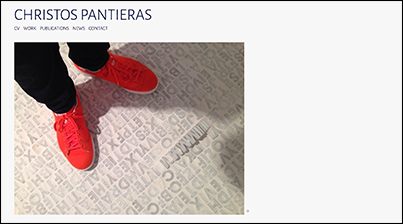