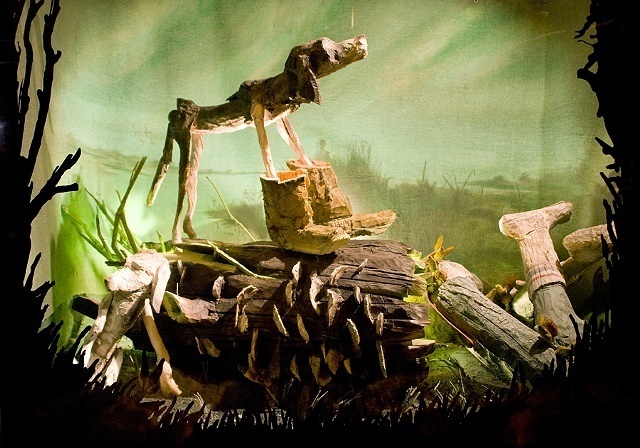 OtherPeoplesPixels: On your website, you mention the “friendly and peaceful view of rural life as portrayed by the crafts and folk art of New England.” Could you expand on this for viewers of your work who are unfamiliar with the New England folk art tradition? Are there certain visual tropes from this tradition that you are responding to in your own work?

Andy Rosen: I’ve been focusing mostly on local art traditions like chainsaw carving, whittling, wooden toys, yard art, etc. But, really I’m looking at everything art-related that is (or was) created by folks in this area. Many of the works tend to have a roughness and imprecision (non-manufactured look) that conjures for me an attitude of the wilderness.

I’m particularly fascinated by a portrayal of nature where the wildlife is shown as majestic, portraying animals that never eat (each other) and are never affected by our presence. And when we do exist together, it’s as though they’re happy to see us. In short, a land at peace, untouched and pristine.

I find the lack of conflict and struggle intriguing, especially, in light of increasing pressure by us on their habitats and food sources. While such scenes surely do exist still, I can rarely see such things without wondering what’s really going on here?

I think it may be easy to dismiss such works as escapist, idealistic or merely decorative, but for me they have a kind of revelatory power. These works are more mirrors than lenses. Reflected on the faces and gestures of the animals in these works, are our desires, beliefs and fantasies about this area.

In this context, what I make becomes my way to better understand the extent to which these fantasies shape and influence my conception of nature, my biases and beliefs. For instance, why do I focus my attention on particular elements within a landscape or why do I choose certain animals and pretty much ignore others?

OPP: Woodcarving is your most prevalent media. How did you learn it? AR: I’m more or less self-taught. My training at school was as a painter and glassblower. So for needed techniques and tricks I study what I need to learn and ask furniture maker friends for tips or just bungle my way through.

I’m quite taken by the evocative power wood holds as a material representative of the wilderness.  I love the smell and the feel of it, as well as the surfaces I can achieve with it. Also, nearly all the wood I carve comes from the dump. I like the idea that I’m reconstituting a material that comes directly from my local landscape. 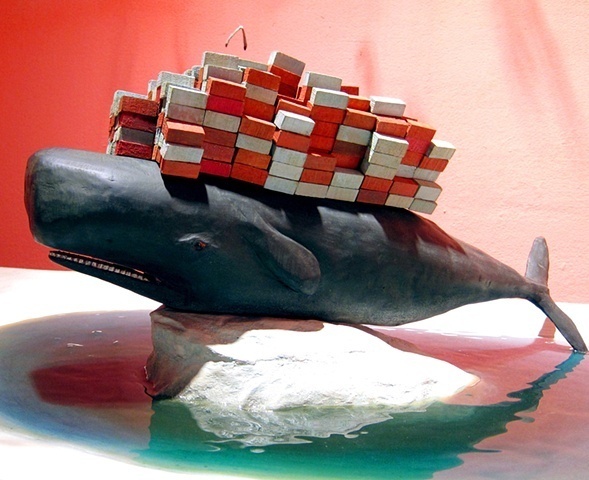 Loaded
2010
Wood and Epoxy
Detail of an installation

OPP: In many of your pieces, evidence of the man-made world is built upon a single animal’s back. In pieces such as I Can Only Take You So Far, Barnacle and the installation Loaded (2010), the animals’ faces express weariness and excruciating pain. In other work, such as Trick (2010) and Chip (2010), the animals seem at peace, almost joyful. Can you talk about this difference?

AR: My interest in understanding what is happening to the environment changed. I began to question why I was depicting animals as pawns or helpless creatures in our game. This kind of thinking seemed umm... rather self-centered. Though we are certainly in an era where our actions are affecting every habitat on Earth, I’ve become increasingly interested in a more ambiguous portrayal of animals affected by human activity. It also corresponds roughly with the birth of my son. It’s pretty hard to not see one’s offspring as an investment in the future. So many questions and concerns I had regarding the big ol’ problems of US and the environment were now being asked in the context of bringing a child into this world. How should I respond to what is undeniably a major issue that my son and his generation will face?  My artwork seemed like the best place to start this dialogue. But, should my language be dire? Why? Was there a way to talk about this worry without directly stating it? I also became increasingly surrounded by his toys. These toys invariably depicted an animal smiling or joyfully doing something laborious—moving dirt, carrying people, etc. What are they all so happy about? Don’t they know what’s happening to them? I like how a smile can express joy and a grimace at the same time. 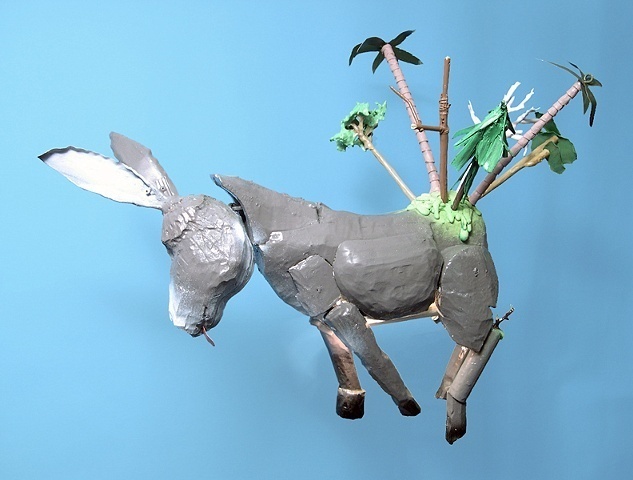 Pinocchio
Wood and Epoxy OPP: Each of your sculptures and installations implies a narrative and many read like allegories. Some make references to known fairy tales including Pinocchio and Sleeping Beauty, while others evoke well-known fables in their use of specific animals like the hare and the fox. Do you generally have a specific narrative in mind before beginning a piece? Is there a prevailing allegory that runs through all of your work? AR: It’s hard not to get caught up in the fantasy/idea I create. I even pat my sculptures on their heads, as if they’re real. On some level, I really feel for them. This kind of deceptive empathy is how I generate narrative. It definitely shapes what happens to the sculptures and the decisions I make regarding their plight. It seems weird then to treat this “being” as a symbol or stand-in for a larger theme. They probably still are allegorical but I think I’m most compelled by the irrepressible urge to treat my works like real animals. I know it’s a fantasy, but it’s also something that is for me impossible to ignore. In this way, play becomes both subject and tool. As for the use of fables and fairytales, I can’t help but notice their influence, especially those that take place in rural settings. The notion of a fairy tale as a way to process something more abstractly or indirectly within the environment resonates with me. I’ll borrow from these ideas, usually only in part. I’ll use them as a framework to build from. However, I don’t initially have a narrative that I set out to illustrate. I often have only a vague sense or image in mind for each piece, a kind of gut level pull (read, biases and beliefs). To make the rabbit (Duster) for instance, there was some sort of narrative bouncing around my brain, a picture or sense of this rabbit in a really specific location. It’s often as though I can’t really see it until I make it. There were a handful of iterations before I eventually decided upon making him into a motorcycle.  Sometimes a piece will languish in a pile in my studio, half-completed for really long time. And I also usually make several pieces at once. What I’ve found is that the story unfolds as a kind of interaction between the objects I’m making and have lying around. I ask myself, what if this thing and this other thing were put together?  Throughout the course of making it, the idea becomes clearer, almost as if I’m fleshing out the scene in a landscape painting. 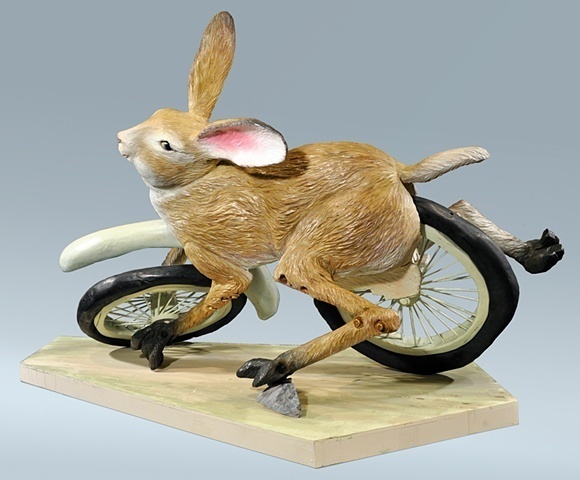 OPP: In the most recent pieces, animals are engaged in unnatural states of transportation. The fox in Psst (2010) has become cunning beyond what is natural. He must think like a human. He appears to be avoiding some danger on the ground. I imagine toxic sludge or some kind of acid, something that is the result of industry. The hare in Duster (2010) has become part machine. Its characteristic speed is no longer enough. It needs wheels in order to escape some unspecific danger. I can’t decide if these pieces have a positive or negative outlook about the animals’ chances for survival. I can’t decide if they have evolved or if they are doomed. What do you think about the presence of optimism and/or pessimism in your work?

AR: A couple years ago I asked some friends who are prominent in the fields of botany and biology, whether they we’re optimistic about the state of the environment. Essentially I was wondering if there was a lot of irrational fear going on or if our fears were warranted. They were both certain, given their research and the research of their peers, that we are in a period of massive species collapse of both flora and fauna (and likely us, as well).

Knowing that we are witnessing huge changes every day, what’s there to be optimistic about? I’m not sure.

However, I’ve started to address depictions of majestic or happy animals, head on. It’s an attempt to see if I can really feel it or find it, despite the facts. 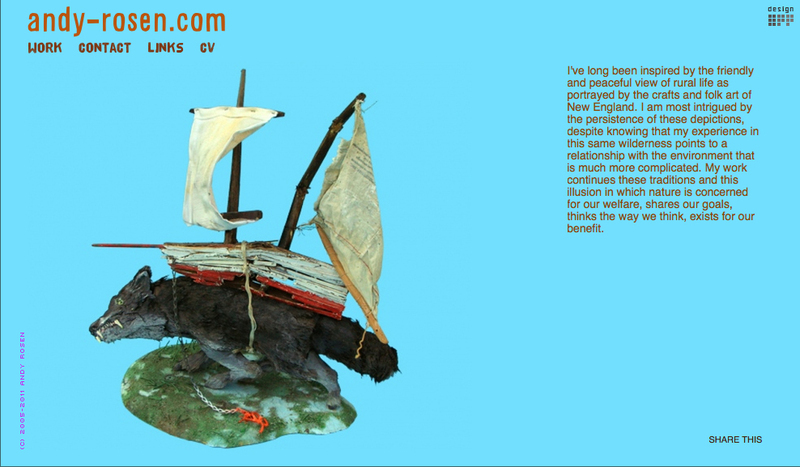