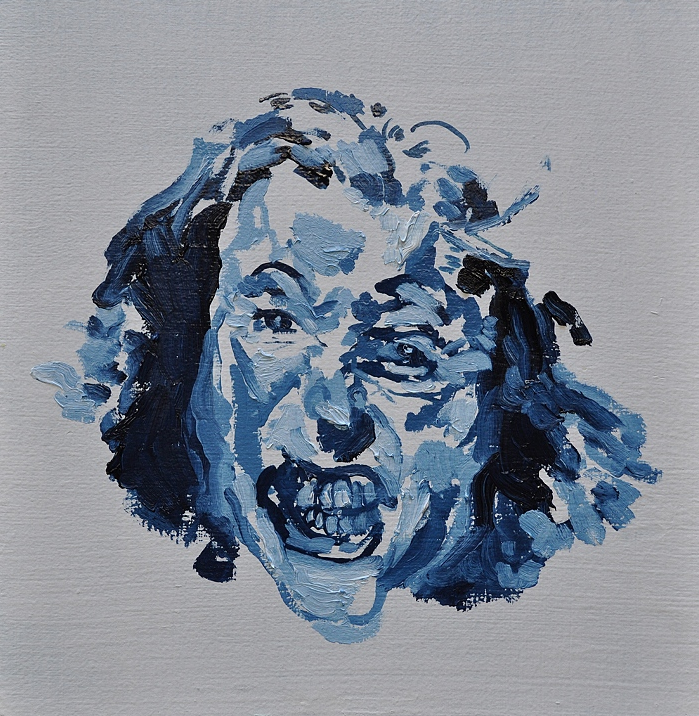 Artist, illustrator and educator ALLEN BREWER is searching for the truth. He uses a variety of conceptual strategies to erase traditional means of personal perception and the conscious pursuit of artistic style in an attempt to get at the "thingness" of his subjects. For his Blind Drawings and Blind Paintings, he doesn't look at the substrate as he draws. For his most recent solo project VERBATIM at the Minneapolis Institute of Art, he recreated works in the museum's permanent collection based solely on the written descriptions given by museum goers. Allen has exhibited at Burnet Art Gallery at LeMeridien Chambers, The Soap Factory and Soo Visual Arts Center, all in Minneapolis. He also works collaboratively with last week’s Featured Artist Pamela Valfer. In 2012, Brewer and Valfer participated in the EVA International Visual Art Biennial (Limerick City, Ireland). For their next project, they will collaborate on a project for the Minnesota Biennial at The Soap Factory. Allen lives and works in Minneapolis, Minnesota.

OtherPeoplesPixels: For your series Carbon Drawings, you copy found vintage imagery using typewriter carbon. In reference to this series, you state on your website: "The result is a 'ghost,' devoid of any human embellishment or direct mark making. . . By eliminating my own perception of the thing, I am getting closer to its truth." Why is the truth of a thing important to you? Can you ever really find it?

Allen Brewer: Truth is something I’ve always questioned. Growing up, we are fed a steady diet of embellished truths. . . fables, half-truths and white lies. All of these are meant to soften the blow of disappointing factual realities such as our impending death, trust in others and “true love.” My attempt to find out what is real or true is hopeless. I realize that. Yet I think we can find some truths in the search, whether it’s an uncanny moment that speaks louder than the event or a unique pairing of line and form to construct a more accurate reality. 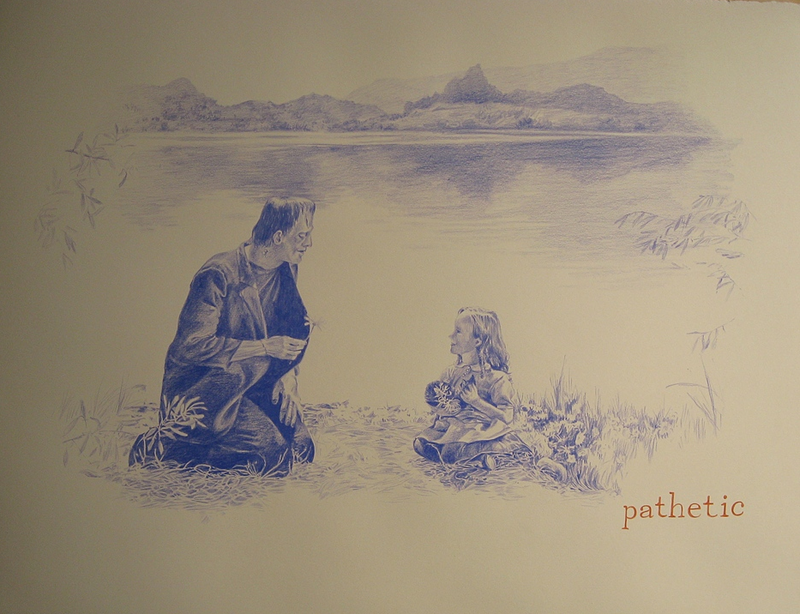 OPP: The more I look at all your work which attempts to erase the hand and perception of you as the artist, the more I think about the difference between perception and interpretation. Perception is how we experience the external world through our senses and interpretation is the meaning and value we ascribe to that information. Your actions direct me toward an object or image and—to use your word— its "thingness," but, for me, the truth doesn't lie there. The truth is in the feedback between a thing and a human, in the interpretation. I always go back to thinking of you and why you, as an artist and as a human being, choose to copy or recreate one thing and not another. Do you think erasing perception highlights the role interpretation plays in meaning-making? Or are you not concerned with interpretation?

AB: I am concerned with interpretation, especially since it’s all we have to make sense of objects and events. We have a limited language that helps in this process. But, ultimately, the “thingness” attributed to such objects and events means nothing; a spiraling into Platonic theory essentially disproves the primacy of the form’s physicality over the idea of the form. By erasing—as best I can—my interpretation of the “thing,” I attempt to present a more objective idea of the “thing.” I’m interested mainly in the open-endedness of ideas, which for me, represents the truth. I seek to present an unvarnished transcription with which the viewer can find their own truth, not a myopic narrative or interpretation. Truth is a slippery subject; there are lies everywhere we look. My work deals directly with photography and text. We tend to complacently accept these two standards in media as truth, which is a phenomenon I recognize as imperfect. 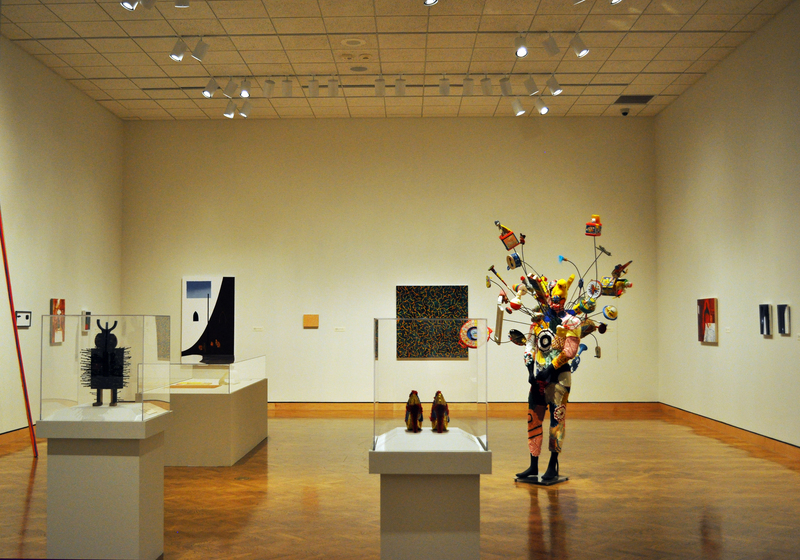 
OPP: Introduce us to your most recent project VERBATIM, which just closed at the Minneapolis Institute of Art (MIA). It takes your exploration of transcription one step further by including a go-between, another level of mediation between you and the work of art you are transcribing.

AB: VERBATIM started out as a site-specific experiment with two goals: 1) to present work based solely on the museum guests’ written interpretations of artworks within the museum, free from my own agency, and 2) to use this process to further expand upon my compulsion towards mediated work. I placed description forms throughout the MIA, asking guests to isolate one artwork, write about it in detail and then turn it in for me to decipher.

Once in the studio, I read and re-read each description, forcing myself to forget my knowledge of said piece and to construct the work based solely on the literal (Platonic) meaning/idea of each written word. For instance, people tended to use overly romantic phrases and emotion when writing, which, according to my imposed rules, were unusable. Instead, I relied on descriptors and nouns that could exist as more universal systems and codes. Hierarchy also helped sort the large ideas in the descriptions from the smaller moments, which aided in the ever-growing rulebook of this project. Eventually, I realized that I was dealing with an ever changing expanding/contracting conceptual issue: language. The end result was an exhibition that mimicked the permanent collection of the MIA. VERBATIM was a reflection of famous works filtered through the barrier of language and nuance of interpretation. I’ve gained confidence and insight with this project, causing me to integrate mediation more seamlessly with intent in my work.

OPP: I'm interested in the fact that "people tended to use overly romantic phrases and emotion" when describing the works of art. It seems to imply that the museum goers who participated in VERBATIM experienced visual art more through their emotions than through their eyes. Was this a surprise to you? Does this say anything about the true nature of visual art?

AB: The responses I received—about 200 in total—were split between personal, emotional reflections and overly-analytical lists of sizes, materials, proximities and diagrams. I could tell who had art education by the writing style and word choice, but I didn't let that particular phenomenon guide my choice or which pieces to recreate. I looked for a unique voice in the description, one that exemplified the contracting and expanding nature of language itself. The way in which people write about art is revealing. Each person who took time to describe a work used their own codes and systems of description, which made my task that much more difficult. Not only did I have to decipher that code and its context, I also had to somehow address it as a universal. In hindsight, if I had another go at this project, I would ask 200 different people to describe only ONE piece, then make work based on the 200 differently nuanced descriptions, similar to Francis Alys’s St. Fabiola project. The true nature of visual art will always exist as a collection of subjective voices, giving it credence within a certain context. 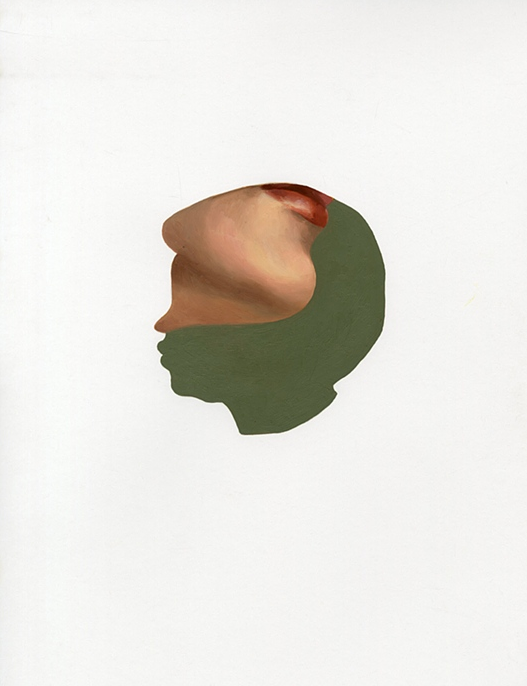 OPP: You will be collaborating with last week's OPP Blog Featured Artist Pamela Valfer for the upcoming Minnesota Biennial at The Soap Factory. How are the two of you approaching this exhibition?

AB: ,,,—read as Comma Comma Comma— is the title of the biennial. The meaning in those marks gives freedom to presentation, installation and meaning. They literally mean (to me) “and then. . . and then. . . and then. . .” The co-curators are David Petersen and John Marks, former directors of Art of This, an artist-run venue in Minneapolis with month long exhibitions and one-night events. AOT was a space for emerging and underrepresented artists who were willing to take risks with space and presentation. There was a refreshing fluidity there, and the program included artist talks, lectures and workshops.

,,, will resemble that platform, and Pam and I have respected the approach by continuing our idea of post-studio collaboration. We are married and share a small studio, so there is no room for ego and secrets once we enter it. Our working concept is that of opposition, concerned with the slippery space between reality and meaning. That’s all I can say for now, as we are currently working and thinking. I can tell you that we are not making traditional collaborative pieces, by which I mean the passing back and forth or the simultaneous partnership of one substrate. We are each making new work that represents or embodies the concepts in our solo work,. Then we will experiment with those pieces as dialog and conflation on a shared wall in the studio—a practice space, if you will. The Soap Factory, a 12,000 square foot, uninsulated structure is 100+ years old. The wall surfaces include exposed brick, drywall, metal, wood and glass. All of these factors will guide Pam’s and my decision-making process, for it would be a shame to NOT recognize the specificity of the exhibition space. 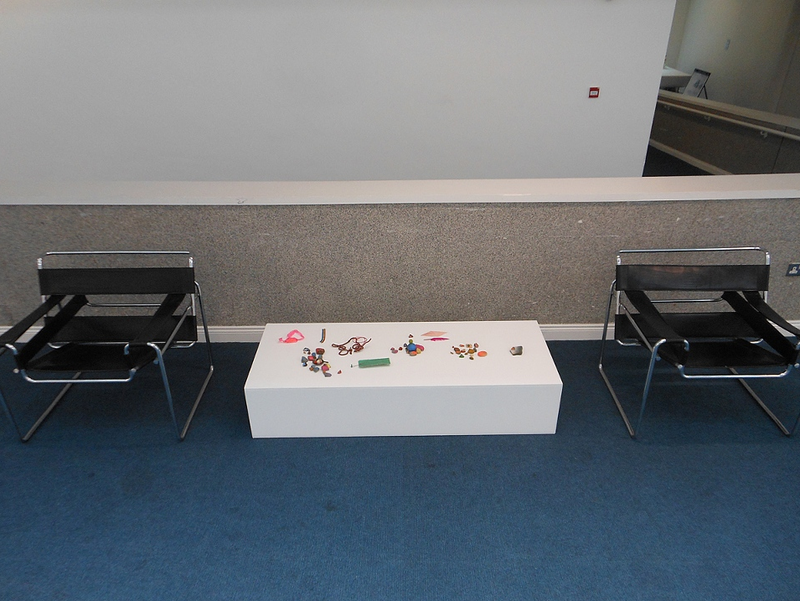 OPP: And I'll ask you the same question I asked Pamela: how has collaboration changed your solo practice?

AB: The collaborative process has reinforced the fact that perception is NOT universal. Working with Pam—or anyone for that matter—is akin to the first day of school. You show up to a group of strange faces, all with their own histories and sets of rules. In order to survive, you must make friends and be willing to be vulnerable and open to seeing the validity of their ways. You may disagree with your mates, yet you’ll see them again in the morning, so humility and flexibility keep you from killing each other. In the end, you’ll shed the idea of difference in favor of something shared. The opinions and perspectives Pamela offers make the self-questioning in my own work more meaningful. She reminds me (as I hope I remind her) that we are not islands operating in vacuums.  We’re more like an archipelago. . . a series of islands connected by a zip lines. 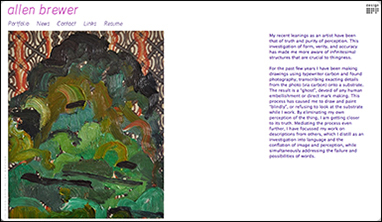 To view more of Allen's work, please visit allenbrewer.com.Featured Artist Interviews are conducted by Chicago-based interdisciplinary artist Stacia Yeapanis. When she’s not writing for OPP, Stacia explores the emotional and spiritual significance of repetition in her cross-stitch embroideries, remix video and collage installations. She is an instructor in the Department of Fiber and Material Studies at The School of the Art Institute of Chicago, where received her MFA in 2006, and was a 2012-2013 Mentor-in-Residence at BOLT in Chicago. Her work is on view through September 2013 in Abstracting the Seam (Hyde Park Art Center, Chicago), and she has two upcoming solo exhibitions: I Still Haven’t Found What I’m Looking For (Klemm Gallery, Adrian, Michigan) in November 2013 and Right Here, Right Now (Heaven Gallery, Chicago) in January 2014.