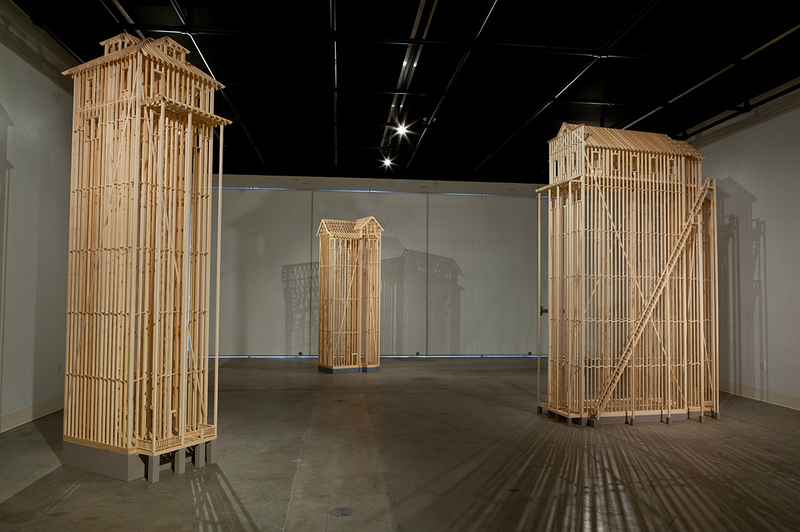 TED LOTT uses traditional building and woodworking techniques to create sculpture that blurs the line between form and function, often using unexpected scale shifts to engage the viewer. He is currently a year-long Artist-in-Residence at the Indiana University of Pennsylvania Art Department and will soon be heading to the Vermont Studio Center. In October 2012, his solo show Anamolous Infrastructures will open at Caestecker Gallery at Ripon College. Ted lives in Madison, WI.

OtherPeoplesPixels: What was your first experience with woodworking?

Ted Lott: My first experiences with woodworking happened during my time as an undergraduate. I went to art school with the intention of becoming a Sculpture major and took woodworking classes with the idea that it would be a good skill to help me make my work. Coincidentally, the college was starting a wood program at the same time, and I became so intrigued by the medium that I decided to major in it.

OPP: What is it about this medium that you love?

TL: One of the things that I love about woodworking is the incredible flexibility of the medium. There are so many things that you can do with the material in the realm of sculpture, furniture and beyond. It is a way of working that is truly accessible: a few basic tools and machines, and you can jump right in. 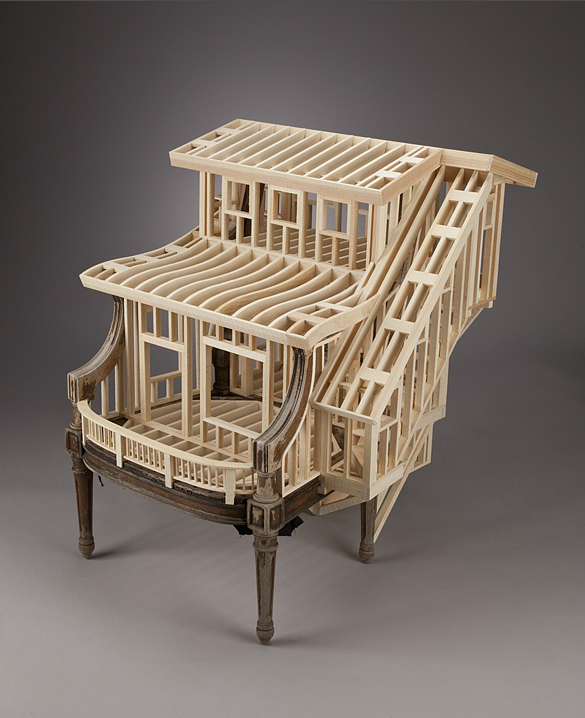 OPP: You've stated that housing is possibly the most widespread use of wood throughout the modern world. Both Possible Architectures (2012) and Attenuated Landscapes (2011) reference this use as they explore how both architecture and sculpture relate to our bodies in space. With this in mind, can you talk about your use of scale in these bodies of work?

TL: In Attenuated Landscapes, the works are both diminished in scale and, at the same time, elongated in their vertical dimension. The idea was to create work that speaks about the ordinary material circumstances of everyday life: in this case, architecture. Taking an immense object such as a house and reducing its footprint causes us to relate to it in a much more personal way. Instead of being enveloped by the space, we start to relate to it as we would another person, on a human scale. The decision to elongate them vertically speaks to the desires of people to overcome or exceed their ordinary lives. I was seeking to instill a feeling in the same way that cathedrals or skyscrapers do. Expanding and reaching for the sky, these regular buildings become more than mere shelter.Possible Architectures, while utilizing some of the same techniques, is very different in focus. Furniture represents the human scale at its most basic; a chair is designed to hold a human body.  Architecture operates on the same principle, but the size is monumental. By combining the two, I was hoping to create cognitive dissonance, where the instinct to imagine yourself in the architecture clashes with the instinct to imagine yourself sitting in the chair. It is helpful that architecture and furniture share much of the same vocabulary of form, so that legs can become columns and arms turn into buttresses.OPP: For the architecturally-illiterate (like myself), could you explain balloon framing and it's history in the Midwest?   TL: Balloon framing is the process by which a building is made out of wooden studs and dimensional lumber, most widely known is the 2x4, but also 2x6, 2x8, etc. By most historical accounts, the method originated in the Chicago area in the mid to late 19th century. A variety of historical factors led to this innovation, most notably the availability of cheap and plentiful iron nails and the increased distribution of machinery used to create standardized lumber sizes. Prior to this time, most housing was made of local materials by local craftspeople, and the techniques used varied widely. With the advent of the railroads and steam power, lumber could be quickly cut to standard dimensions then shipped to ready markets. So you could say that balloon framing was one of the first industrial processes to enter the residential construction market. It took away the time-consuming processes of elaborate joinery, which were previously necessary, and allowed for faster and more economical building. The basic principles of balloon framing are still in use today and are the way most residential and much commercial architecture is constructed around the world.

OPP: Your practice blurs the line between the functional and the aesthetic. You create both sculpture and furniture, and there are some pieces, such as Dinosaur Jr (2007) and Branch (2005) that blur that line so much, that I can't tell if they are furniture or sculpture. Do you see these parts of your practice as distinct from one another? Has your view of this changed over time?

TL: They are really two sides of the same coin. As I mentioned, I started into woodworking to learn how to better create sculptures. While I do not make much furniture these days, my background and training as a furniture-maker are constantly informing my work. The idea that a piece could be both is intriguing to me.  OPP: Will you weigh in on the never-ending debate on Art vs. Craft?   TL: To me, craft is a verb. One crafts things, be it a painting, a sculpture or a piece of furniture.  More interesting to me is the idea of use or function. I think we are seeing more and more art these days that engages these ideas—community-based art, work based on social interaction, as well as object-based work. Someday, the art world will get over their cooties-like aversion to the word, and we will all be better for it. 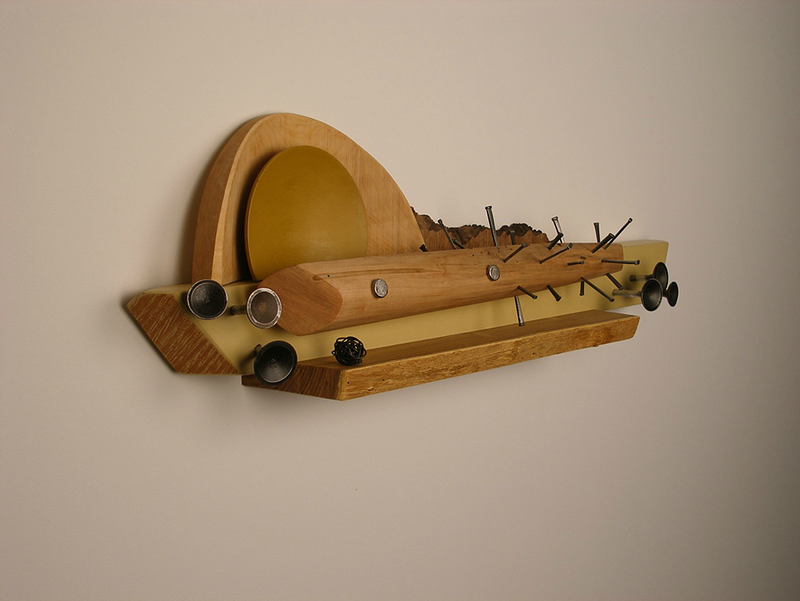 OPP: What's a typical day in your studio like?

TL: I'm a daytime worker, so I like to get into the studio in the morning, but it really depends on what I am doing. If I'm deep in a project, I'll just jump right in where I previously left off. But if I'm starting something new, I often have to spend a lot of time thinking and really playing around with different options. However, once something gets going, I'm the kind of person who is thinking two, three, even four steps ahead, looking at the work and making judgments about where I am and where I am headed. Unlike a real architect, I don't make a full technical drawing of the work before I start. Instead, I will lay out the foundation, or in the case of the Possible Architecture work, put out the object, then make a few rough sketches where I can start to see the overall finished form. Then it's just a matter of building from the ground up. Sometimes, if a part of the building doesn't turn out, I'll tear it all out and start again, so it's a constant give and take between me and the work. 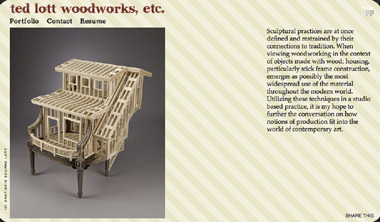