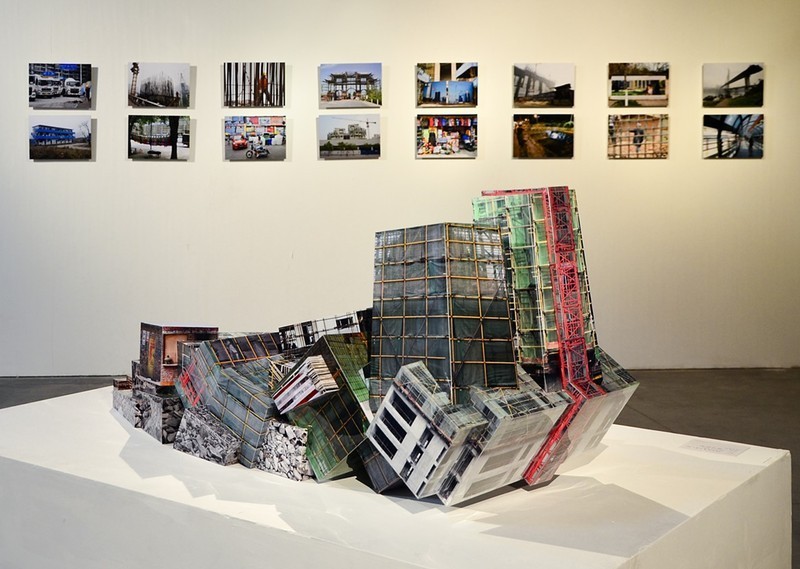 The photographed-covered, fractured planes of PATRICK D. WILSON's discrete objects read as multifaceted mirrors, reflecting the details of a larger, surrounding environment. He employs the interplay between surface, volume and depth to reveal the complex amalgam of geometry, texture, meaning and memory that comprise geographic and architectural spaces. Patrick received his MFA in Sculpture from San Francisco Art Institute in 2005. He has exhibited extensively throughout California at institutions including the SFMOMA Artists Gallery (2010), Berkeley Art Center (2011), Headlands Center for the Arts (2012) and the San Jose Institute of Contemporary Art (2013). He was awarded a 2012-2013 Fulbright Fellowship to travel to Chongqing, China to document the city’s pervasive construction sites. He recorded his experience on his blog and exhibited new work in a solo show at Sichuan Fine Arts Institute (2013). Having recently returned to the U.S., Patrick is in the process of relocating to Brooklyn.

OtherPeoplesPixels: What was your first piece that combined sculpture and photography?

Patrick D. Wilson: Infinity Crate was the first piece I made combining sculpture and photography. I used downloaded images of stars photographed through a telescope to cover the outside of a small meteor-shaped crate sculpture. I made this piece in response to some of the reactions I was getting to my sculptures including Low Earth Orbit, Crash Site (2007). Viewers would often ask, "What's inside?" I always thought this was a strange question to ask about an artwork, as I would assume that the artist is showing me what they want me to see. Ideally, the viewer will imagine what objects are inside any of my crate or box sculptures. I once jokingly replied that the sculptures were filled with infinite space. I initially made this piece as a humorous response, but I felt that the photographs actually created that paradoxical sense of space on the surface of the vessel. So I started to explore other ways of replicating that. 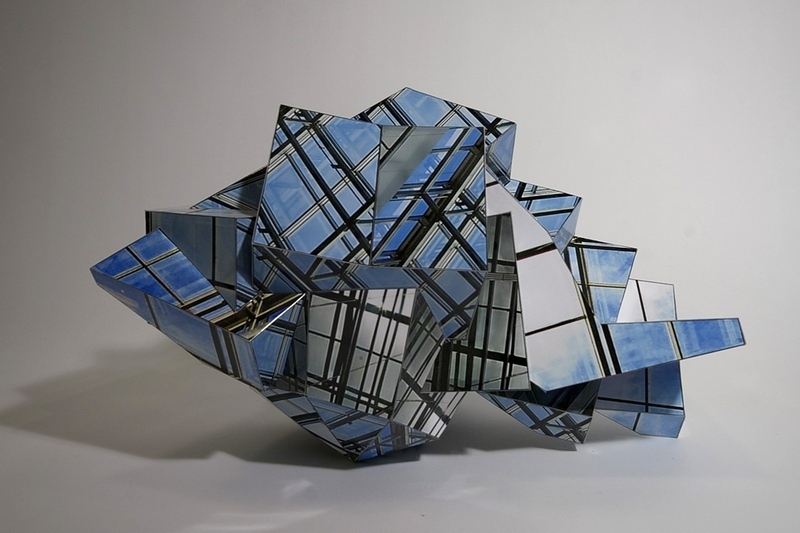 OPP: Sculptures like Westfield Centre Skylight (2009), Cloud City I (2010) and The One That Looks Like a Cloud (2010) are reminiscent of crystal formation. Is this a visual reference for you?

PDW: A lot of people see crystalline structures in these works, but there isn't really a conceptual link to that. It's not something I am conscious of when I compose them. I think it's just that crystals also have very apparent geometries and form in these conglomerated structures that are similar to the way my sculptures are built up.

I think more about architecture and rocky landscapes when I am sketching these. I hope that the arbitrary geometric formations will create an intuitively habitable space. The sculptures are like architectural models, which invite viewers to imagine themselves inhabiting the space as if the tiny rooms and hallways were real. Photographs similarly lead a viewer to imagine the environment beyond the edge of the frame. Both of these forms encourage a nearly-automatic, imaginary transformation without any form of verbal suggestion. This involuntary image production occurs all the time when we watch television or listen to the radio, whether or not we are fully conscious of it. It's the part of us that stitches stories out of fragmented scraps of perception. I take advantage of this unique function of the human mind to create spatially-constrained objects that also suggest an environmental or immersive embodiment.

Right now, viewers feel very connected to the hard edges and geometric faces because of the amount of digitally-composed imagery they are consuming. I imagine these sculptures will look quite different in ten years, and that my compositions will adapt with the compositional tools that I have access to. 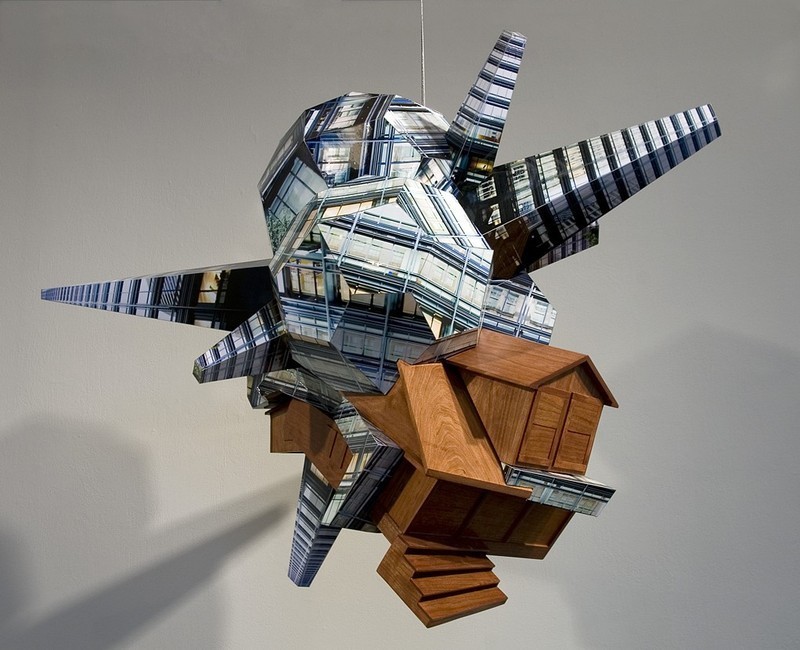 OPP: There are many steps to your artistic process: taking photographs, designing using three-dimensional modeling software and fabricating your sculptures. Is there any part of the process that you enjoy most?

PDW: I definitely like taking the pictures the most. I imagine myself to be visually mining the environments for their interesting materials and textures. It's sort of out-of-body approach to looking. Really there are two separate phases to the photography. In the first phase, I photograph entire scenes as a way of contextualizing the work and to figure out where my interest really lies. That process informs the three-dimensional models. Then I have to go back for the second phase to get the surface photographs that will fit the sculptural form. I don't generally use pictures of entire objects to get the textures. I photograph smaller parts. That way I get better resolution, and I can photograph from angles that create interesting geometry on the sculpture.

OPP: Is there any part you wish you didn't have to do?

PDW: Assembling the cut photographs is probably the most painful. I always think I am going to enjoy it. But about half way through the process, I start to melt down because it requires a lot of slow, careful handwork, which usually has to be redone at least once. Anything creative is already done by that point, and there isn't even any problem-solving to do other than keeping the dust and air bubbles out of the adhesive. But it's a good chance to space out and listen to a year's worth of podcasts. 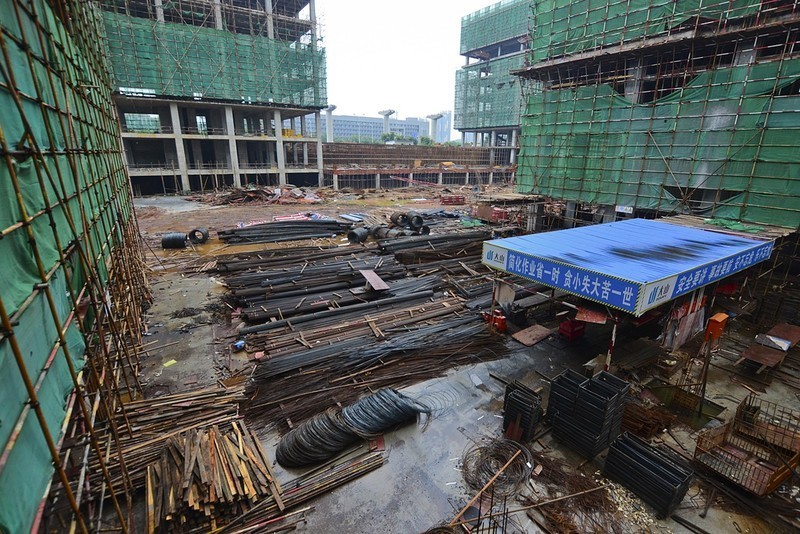 OPP: You were awarded a Fulbright Fellowship to travel to China in 2012-2013. What led you to Chongqing specifically?

PDW: My general topic was construction sites. Chongqing is a gargantuan and rapidly-expanding area of China, so it seemed like there would be plenty of relevant material for me there. Wikipedia puts the population of Chongqing at over 29 million, though the actual urbanized population is probably a third of that. I was fascinated by the idea of this inland, industrial megalopolis that most people hadn't heard of, especially prior to its recent corruption scandals. It was off the radar for people who weren't specifically interested in China, and I assumed that meant that it was sheltered in some ways from the westernization you see in comparable cities like Beijing and Shanghai. The Sichuan Fine Arts Institute is also there. They have a sculpture department that is very famous for public works, especially government-commissioned, large-scale monuments. This seemed to be a very unique part of the sculptural universe, so that drew me there as well.

OPP: What’s fascinating about construction sites for you?

PDW: Virtually all sculptors have a fascination with industry and its capabilities. Construction sites are one field within the industrial landscape. The sheer accumulation of materials—steel scaffolding, concrete, plywood—is exciting to anyone who is a maker. But I am particularly interested in documenting the construction site as a continuous, nomadic event that exists independently of architecture and development. The construction site is more than a stage in a building’s life; it is a roving matrix of material and labor that is the generative edge of the urban world. It's a necessary agent of change, but it creates so much waste, pollution, noise and human toil. It is the dark and dirty complement to the shiny image that is presented by real estate developers. It is this value-neutral beast with its own momentum and economy that is hidden behind the curtain of progress. That conception of a construction site's existence continues long after the buildings are bulldozed. 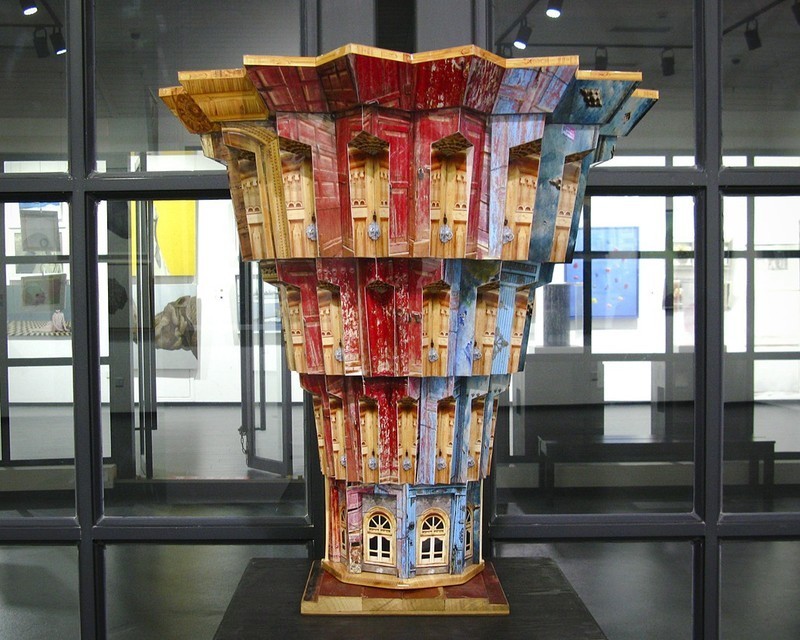 OPP: Could you highlight some of the new work created in China that was in your solo exhibition at the Sichuan Fine Arts Institute in October of 2013?

PDW: The most successful piece in the show was Kashgar Column. Kashgar is in Xinjiang province near the borders of Kyrgyzstan, Tajikistan and Pakistan. It was an extremely inspiring place. I didn't feel like I was in China anymore. The relevant issues in my research shifted; the geography took over. The images on the outside of that sculpture are of the doors saved by the families in the old city of Kashgar. I read that the doors are thought to contain the family history and must be moved with the families when a home is demolished. When I left Chongqing, I gifted that piece to the sculpture department at the Sichuan Fine Arts Institute and brought a duplicate copy of the constituent photographs home in a plastic tube.

Learning to make sculpture in Chongqing was definitely more challenging than I expected. You would think that a city that builds as much as Chongqing does would have limitless access to materials, but procuring the materials I wanted was difficult. Fractal Architecture is a piece that I made in a furniture factory where they fabricated Ming Dynasty-styled furniture. I was invited to work there after complaining to one of the sculpture professors about the quality of the wood I was finding. When I got to the furniture factory, I found that they actually used a lot of oak imported from the U.S. I lived there several days a week—it was more than two hours away from my apartment—and worked alongside their crew. Most of the workers spoke local dialect, so I could only communicate directly with the two that also spoke standard Chinese. That was a great experience in making because we largely communicated through our shared language of the craft. 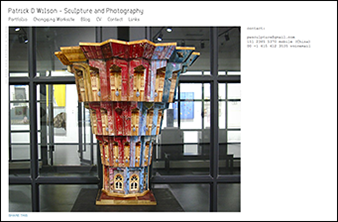 
Featured Artist Interviews are conducted by Chicago-based interdisciplinary artist Stacia Yeapanis. When she’s not writing for OPP, Stacia explores the relationship between repetition, desire and impermanence in her cross-stitch embroideries, remix video and collage installations. She is an instructor in the Department of Fiber and Material Studies at The School of the Art Institute of Chicago, where received her MFA in 2006, and was a 2012-2013 Mentor-in-Residence at BOLT in Chicago. Recent solo exhibitions include I Still Haven’t Found What I’m Looking For (2013) at Klemm Gallery, Siena Heights University (Adrian, Michigan) and Everything You Need is Already Here (2014) at Heaven Gallery in Chicago.