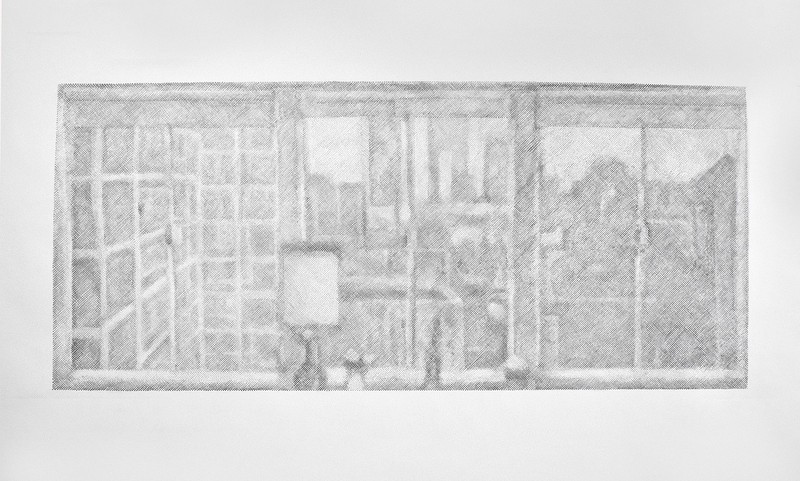 Artist and educator PAMELA VALFER explores theories and experiences of contemporary hyperreality in her mash-up drawings of real and fictional landscapes and painstakingly pixelated renderings of mediated versions of actual architecture. She received her MFA from the University of Minnesota in 2002. Her work has been exhibited at Burnet Art Gallery at LeMeridien Chambers (Minneapolis), The Bindery Projects (St. Paul, Minnesota) and CUBE Centre for the Urban Built Environment (Manchester, England). Since 2007, her work has been included in The Drawing Center’s curated artist registry. Pamela also works collaboratively with Allen Brewer, whose work will be featured here on the OPP blog next week. In 2012, Brewer and Valfer participated in the EVA International Visual Art Biennial (Limerick City, Ireland). For their next project, they will collaborate on a project for the Minnesota Art Biennial at The Soap Factory (Minneapolis). Pamela lives and works in Minneapolis.

OtherPeoplesPixels: Could you talk about the exploration of hyperreality in your most recent piece Set #1: Cabrini Green/Good Times?

Pamela Valfer: The project is essentially a commentary on the cultural or subjective construction of "reality." "Reality" is not straightforward; it's complicated idea. I use Brutalist architecture from the 1950s to the mid-1970s as the tableau for this idea because it is a great metaphor for constructed idealism as it was set forth by one group of people to solve the problems of another group of people in relation to planned urban housing development. The ideas underlying these Modernist architectural designs were based in utopian thinking that impressed a kind of social engineering upon urban, low-income, city-dwelling populations. In the end, many of these buildings and communities—Cabrini Green being a perfect example—failed due to shoddy construction and high crime. Rather than focus on the building itself, I became interested in looking at the projection of this building through the television show Good Times. The source image I chose was not of the actual building, but rather of a television set based on Cabrini Green. The set itself is the subject. It is the copy of the real, constructed out of cardboard, paint and foam. This is the space where actors play out imagined scenarios from the daily struggles of the real families of Cabrini Green. These are all veneers. This is where hyperreality exists. It is the new reality; the copy becomes the original, simultaneously commenting on its own failure through the lackluster truthiness of the construction (set design, actors et al.). This is my experience of Cabrini Green, my knowledge developed topically through a pop culture edifice. 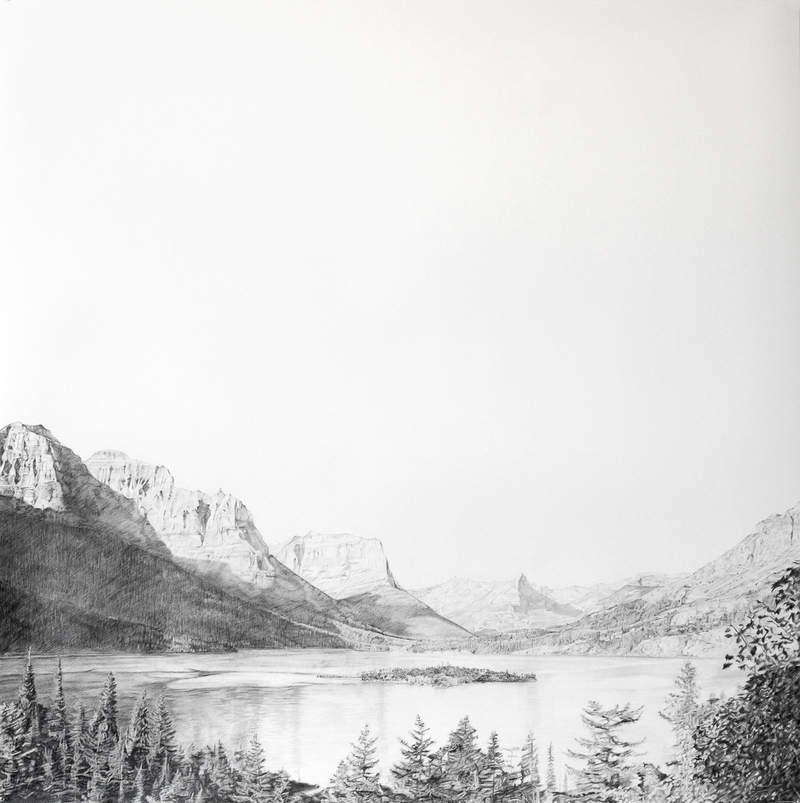 OPP: There's a similar collision of fiction and reality in your series Landscape Simulations. These graphite landscapes pair landforms and architecture from movies with real world landmarks and/or they combine existing landforms and architecture in ways that we couldn't physically experience. One piece places Le Corbusier's Villa Savoye on the surface of Mars, as seen in a Star Trek episode. Another places the historic Checkpoint Charlie—which is actually in Berlin—in Gordale Scar, a limestone ravine in North Yorkshire, England. About the series, you say, "No hierarchical importance is placed on the notion of my 'real' experience versus a mediated one, a contemporary truism that is pervasive throughout our relationship with nature." I think the assumed hierarchy that privileges the "real" over the mediated emerges when simulation is confused with substitution. What do you think?

PV: For one, I think that "substitution" denotes a "one is better than the other" attitude and therefore becomes a  hierarchical approach. I am more interested in presenting these possibilities on equal footing because what we experience directly and what we are given to digest through the mass media culture are often inseparable. Culture shapes our reality and our reality contextualizes culture. This blending becomes interesting when it collides with our connection to nature. Many of us—myself included—are removed from a direct connection with it, so many of our ideas come from the above-mentioned grey zone. I think it is this distance that allows us to objectify and denigrate nature, dislocating our relationship further into a digestible reality.

PV: Experience and reality are, in essence, tricky territories to explore. The project was born out of living in the west of Ireland for four months. Ballyvaughan, where I lived, is a small town nestled on the coast and is strikingly beautiful. It was a truly immersive experience with nature that I had never had before. During my time there I noticed that all my references for such familiarities were formed from my adolescent experiences of pop culture and not necessarily from direct experience. This got me thinking about how perception is often constructed out of constructions. If our minds are filled with constructions, then I feel it is important to know who is doing the constructing that we take as real. My pop culture recollections are as real to me as standing in a field: a point that is important to recognize. 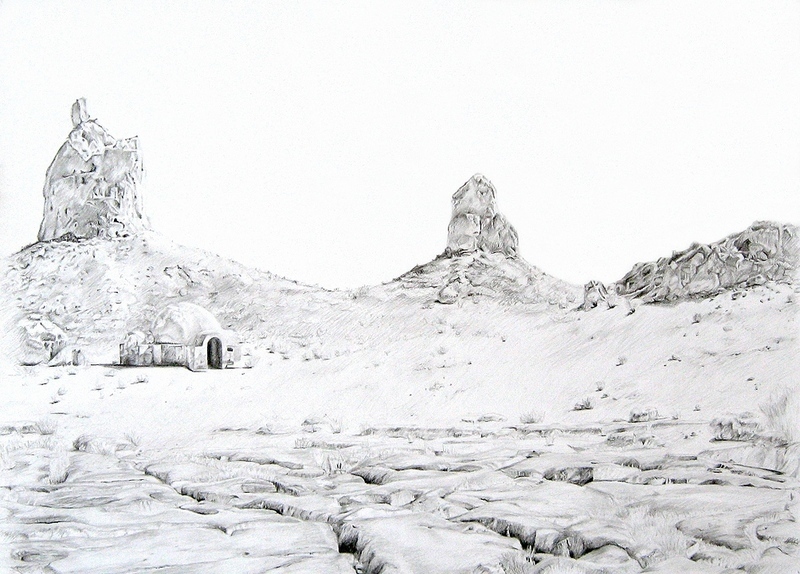 OPP: I would agree that both experiences are wholly real, but aren’t they qualitatively different? I don’t mean that one is better than the other, just that each experience has a different quality to it. Do your pop culture recollections affect your physical experience of nature?

OPP: Is drawing the ideal medium to explore simulation?

PV: I chose drawing specifically for its ability to mimic a simulation. I could have easily done the work with paint, for instance, but felt that drawing was the proper vehicle for my ideas. Drawing is a presentation of reality, but at the same time lacks a kind of truthiness in its atonal qualities. It presents without giving: a kind of hollow exchange. If I had executed these in paint, I feel my effort would have been too cheeky. Paint can mimic reality too closely with its seductive colors and illusionary possibilities. Drawing, on the other hand, has a built in failure to that end. It presents an idea but ends before delivering, at least in the way that I built the drawings. I endeavored to remove all personality of mark. It was important for the drawing marks to not convey a sense of self, rather to be a neutral space in which an emotional position is not asserted. I am not interested in presenting personage within the work. 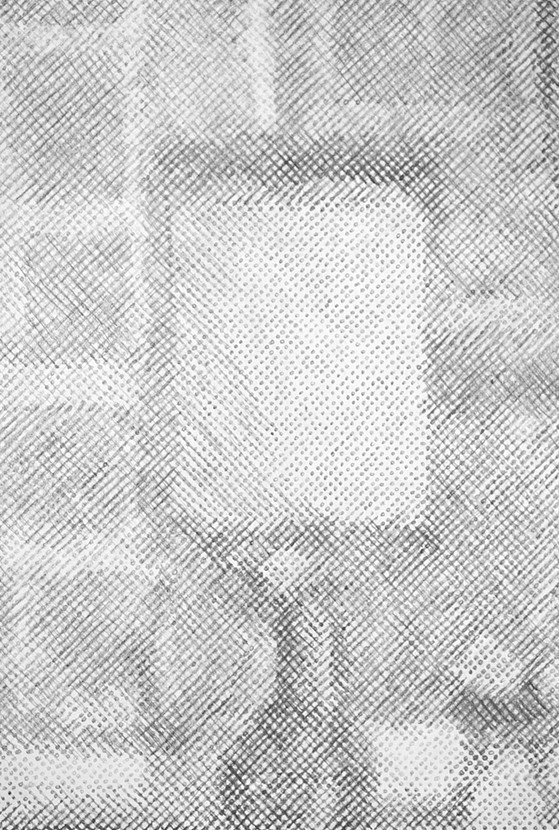 OPP: You've begun collaborating with next week's OtherPeoplesPixels' Featured Artist Allen Brewer. You've known each other for years but never collaborated until recently. How did this collaboration begin?

PV: True. We first became open to the idea of collaborating when we had an exhibition at Occupy Space in Ireland for EVA International Visual Art Biennial in 2012. We realized that we couldn’t approach it as a standard two-person show because the exhibition site was spatially challenging. We didn’t exactly know how this would shape up. We just trusted in the process and decided to leave the possibilities open, abolishing any preconceived notions of how this would behave visually. The final decisions about the show were made in the space itself. We made our own work singularly, but, once in the space, we revisited the work with a new sense of possibility. It allowed us to see our previously constructed works with fresh eyes. We became open to new prospects and juxtapositions not previously offered with the singular work, which was quite freeing. Allen and I checked our egos at the door for sure. We ended up collaborating with each other as well as the space, often creating new works by combining already completed pieces. Rethinking and reconstructing allowed for unexpected results. This was a new experience for both of us and we were extremely happy with the outcome. It created the potential of a post-studio process. 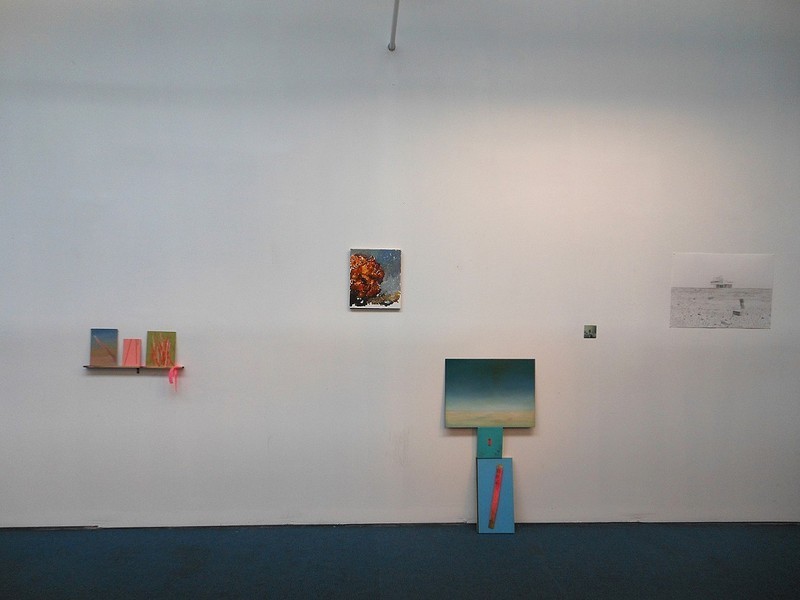 OPP: Has it changed your solo practice in any way?

PV: For sure. I am certainly open to more possibilities now in how I approach my ideas and work. Everything is on the table. I am no longer pigeonholed into one way of working, rather the idea leads the medium and vice versa. For instance, I am currently working on a performance project with Museum of Contemporary Art Detroit for the Mike Kelley's Mobile Homestead project. I might not have considered performance as a methodology/medium previously, so instances like this support my new vision of working.

I am also currently working on a collaborative project with Allen for the upcoming Minnesota Art Biennial at The Soap Factory. We are taking the best of our past collaboration experience and trying to push it forward one step further. We are making work both together as well as independently for the show with the idea that much of the work might shift or change once in the space. In essence, making the work on-site and once again trusting in the process over outcome. 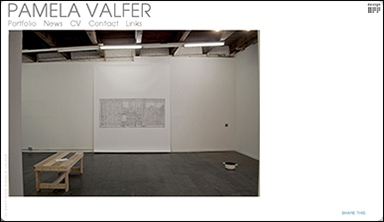