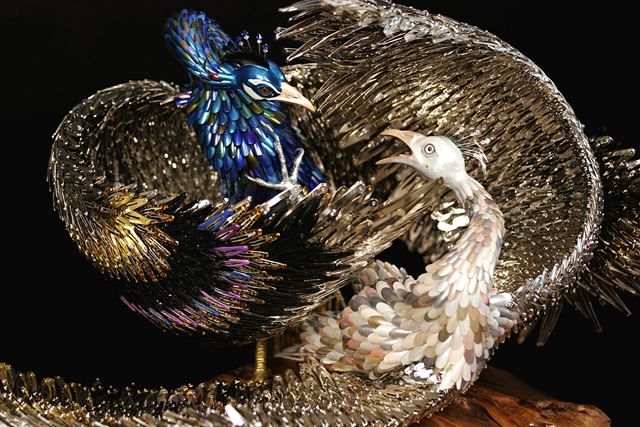 LAUREL ROTH uses such diverse art practices as carving, crocheting, weaving and assembling to make sculptures in an even wider range of materials. Her work explores parallels between humans and animals, using the cultural codes of her materials to reveal the nuances of the human impulse to modify ourselves and the natural world around us. She has been a long-term collaborator with last week’s Featured Artist Andy Diaz Hope. Roth exhibits internationally and currently lives in San Francisco, CA.

OtherPeoplesPixels: Tell us about your history as an artist. How has your earlier career as a park ranger influenced the work you make?

Laurel Roth: What drew me into natural resource conservation, even before I was a park ranger, was the idea that humankind and nature could work together and that I could be a part of that process. It was a mediation between society and the wild, a spot that felt somehow very fitting to me, and I continue to explore it in my current work. It’s also very focused on interactive systems and adaptation, both of which I’m interested in.

OPP: How is being alone in the studio similar to being alone out in nature? How is it different?LR: I would compare it more to gardening, which I love, in that there is an element of collaboration and control that I don't feel if I'm just spending time in nature. I guess that you could say that being in nature is a learning from observing experience and gardening or making art is a learning while participating in experience. 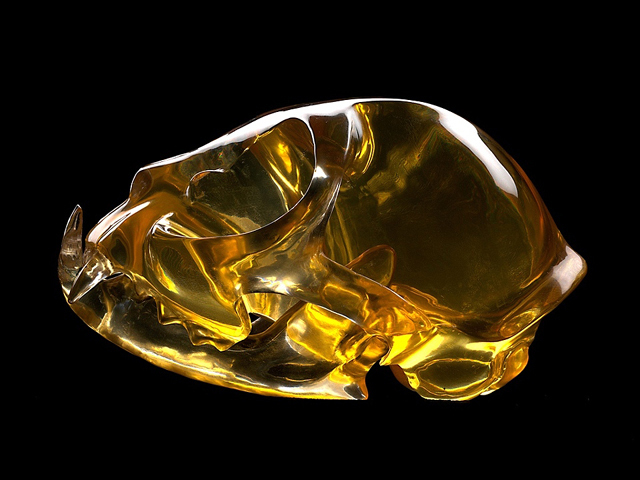 Lap of Luxury: Persian Cat
2007
Hand carved and polished Polysulfone industrial plastic, base (not shown) walnut, Swarovski crystal, aluminum
2.5 x 3.25 x 4 inchesOPP: Man's Best Friend is a series of hand-carved and polished sculptures of dog and cat skulls in walnut, acrylic and Polysulfone industrial plastic, adorned with Swarovski crystals. What makes this work interesting to me is that these sculptures are so beautiful, but there's also a critique of human attachment to animals as objects. Can you talk about this place where beauty and critique meet?LR: Beauty can be a snare that opens people up and makes them more receptive to things they might otherwise dismiss or become defensive about. No one wants to be clubbed over the head with someone else’s opinion—and I actually intend most of my work to be more of an exploration of something that troubles or intrigues me than a diatribe against it. I love animals. I’m kind of obsessed with them as pets, in the wild, and as metaphors in art for aspects of ourselves. I love the variety of ways in which they seem to experience the world, and it makes my world a bigger place to try and understand that. There’s a beauty in the humanity of people yearning for animal companionship in a world where we’re so separated from nature, but there’s also a willful selfishness to breed them to the point that they are physically uncomfortable or unhealthy for our own aesthetic pleasure. 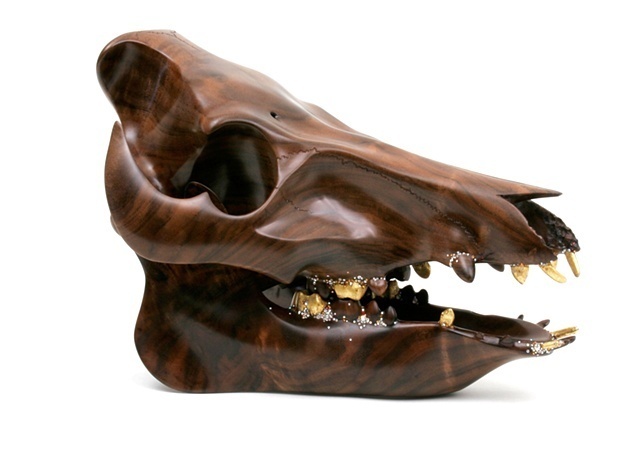 Food #5, Pig
2009
Walnut, gold leaf, Swarovski crystal
11 x 6 x 7.5OPP: Peacocks is a series of mixed media sculptures made with fake fingernails, nail polish, barrettes, false eyelashes, jewelry, walnut, Swarovski crystal, to name some of the materials. What came first: an interest in these specific materials or an interest in the peacock as a metaphor? Can you talk more about the idea of plumage and how the peacocks relate to us as humans?LR: I had been doing work about birds and adaptation to urban living when I began the Peacocks series. In this case, the material came first, seen in a 99 cent store, but the rest came naturally. The first one I made, though smaller than the rest of the series, was the largest sculpture I had made at that point. Like a lot of my work, it took so long to make that I had plenty of time to think about and refine the ideas while I worked, so the sculptures became progressively more refined. It started with peacocks as a fairly recognized symbol of beauty. I’m interested in the choices that humans have about what they eat, with whom/when/if they mate, etc. So, looking at fashion and beauty accessories as a means of communicating mating status let me look at society in a whole new light. The fake nails and barrettes represent not just the beauty of the feathers but also the concept of humans donning mating plumage voluntarily. Many of the sculptures show two birds in mid-fight, but I work to keep it slightly ambiguous as to whether they might be mating or fighting and which one might be dominant. OPP: Swarovski crystal and polished walnut are expensive materials, while the barrettes and fake nails are not. This leads me to thinking about the social constructions of economic class and how taste develops in relation to it. How do these ideas play out in your work?LR: I didn't want those pieces to focus on one economic class too much, because that conversation can easily subvert the subtler one about collective human behavior that interested me. The colors and some of the materials—the fingernails and barrettes—can almost bring an element of kitsch that I tried to temper with the richness (no pun intended) of the forms and other materials.OPP: You have worked collaboratively with Andy Diaz Hope for many years. How has the work the two of you make together influenced the work that you make alone?LR: Having each other to collaborate with allows us to tackle more complicated themes and projects. Hard as it can be, we both have to be receptive to questioning from each other, which expands concepts in exciting ways but also keeps them more rigorously examined. That spreads into my solo work, too. It’s also inspired me to be more interested in engaging the viewer (Andy is a very sociable guy who likes interactive work). 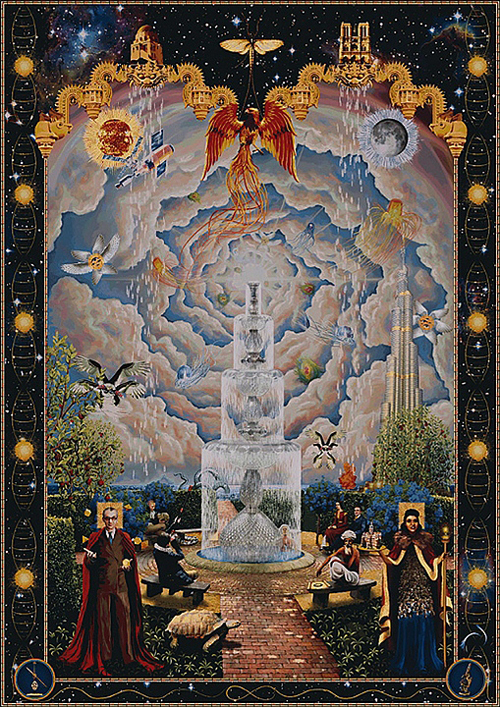 Allegory of the Infinite Mortal
2010
Woven jacquard tapestry
76" x 106"
A collaborative tapestry woven through the Magnolia Tapestry Project, designed by Andy Diaz Hope and myself. OPP: One of you collaborative projects is a series of tapestries woven with a Jacquard Loom through the Magnolia Tapestry Project. Could explain for viewers about the Jacquard Loom and MTP? What was it like to design these pieces collaboratively?LR: Andy and I were inspired by the Unicorn Tapestries of the late 15th century while we were working on a collaborative show called Future Darwinist. We wanted to create a tapestry that stayed true to that inspiration and used the more formal tapestry structure and motifs to explore current scientific themes—namely, the end of Darwinian natural selection and the beginning of human-centric evolution. We realized that we couldn’t weave it ourselves and were fortunate that the folks at the Magnolia Tapestry Project decided to work with us. We spent months taking botanical illustration, reading and studying, painting, and compositing the individual elements into a massive Photoshop file. Magnolia had the expertise to help us translate that into a weavable file with an appropriate color palette—each color is made of a selected palette of woven threads with carefully controlled color changes. It’s then woven on a computer controlled Jacquard Loom in Belgium. Jacquard looms were the first machines to use punch cards for programming and were an important step towards the invention of computers, so that fit perfectly with our theme of exploring current science and technology through aesthetics and practices from the Age of Enlightenment.The collaboration went pretty smoothly, both between Andy and myself and our partnership with the Magnolia Tapestry Project—so well, in fact, that as part of our current fellowship with the de Young Museum we’re working on the third tapestry in what turned out to be a triptych! People often ask whose idea a piece was or which of us worked on which aspects of our collaborative work, but it really doesn’t work that way for us. It’s a fairly free flow of ideas back and forth that constantly change and evolve until we’re both satisfied. 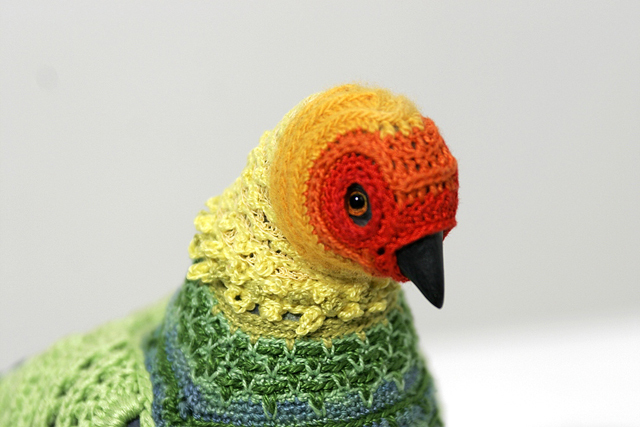 Biodiversity Reclamation Suits for Urban Pigeons: Carolina Parakeet (detail)
2009
Crocheted yarn, hand carved pigeon mannequin, walnut stand
8 x 9 x 13 inchesOPP: What new idea are you excited about in your individual practice?LR: I’m looking forward to developing two bodies of work that I started in the last few years but haven’t had a chance to develop as fully as I’d like—Biodiversity Suits for Urban Pigeons and the Hominid series. The Biodiversity Suits are a series of small crocheted suits that disguise pigeons as extinct birds. Two of them will be on display later this year at the Renwick Gallery of the Smithsonian in Washington, DC. The Hominids are hand carved and polished wood sculptures of various hominid skulls, one of which will be part of a show at the Mint Museum in Charlotte, NC and then the Museum of Arts and Design in New York. 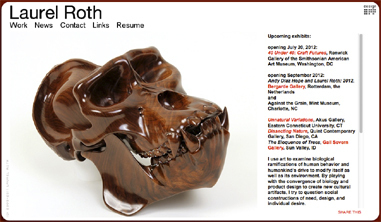