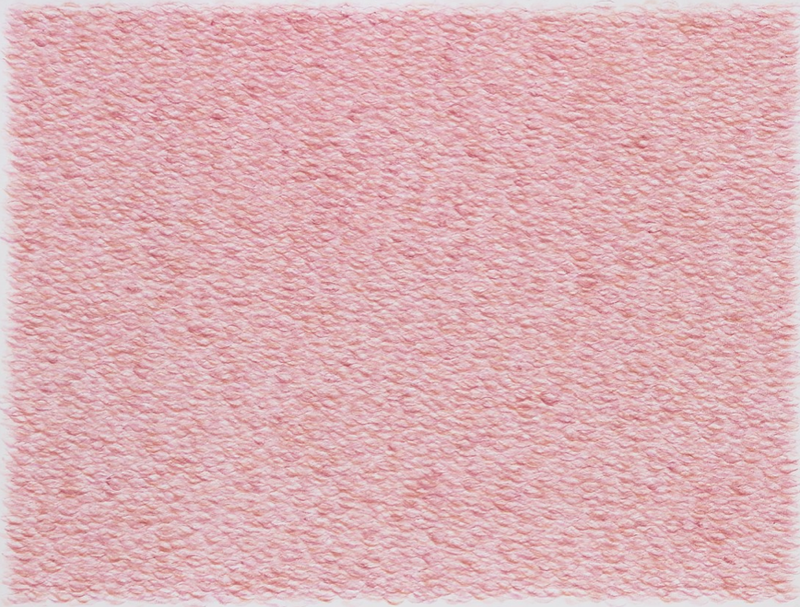 KATHRYN REFI Googles herself. She repeatedly counts and marks the number of days she's been alive. She searches microfilm for events that occurred on the date of her birth and uses objective methods of compiling data from her daily life, including recording sound and light and tracking her own movement on maps. This data is the source of her drawings and paintings. However, the real subject of her work is not "Kathryn Refi," but rather the mystery of existence and the noble futility of attempting to comprehend it through limited means. Kathryn graduated Magna Cum Laude from the Maryland Institute College of Art in 1997 and received her MFA from the University of Georgia in 2002. She has had solo exhibitions at Solomon Projects (Atlanta), the Indianapolis Museum of Contemporary Art and Fugitive Art Center (Nashville). Kathryn lives and works in Athens, Georgia.

OtherPeoplesPixels: Talk about the presence of futility in your work.

Kathryn Refi: In my work, I am grasping at something I can never get a hold of. It seems like this grasping and searching is part of the human condition. Hopefully we are always struggling to better understand ourselves and the world around us, looking for meaning while simultaneously accepting the possibility that there is none to be found. I'm in a constant state of searching that has no end goal. Sometimes it feels futile but is none the less crucial. The faith in the process, maybe even in the futility, becomes a goal in itself. It is a way to combat nihilism. My work is a search for meaning in my life through quantification and visualization of certain aspects of my experience. I approach this subject from different angles and through different means to see what bits of insight I might glean. 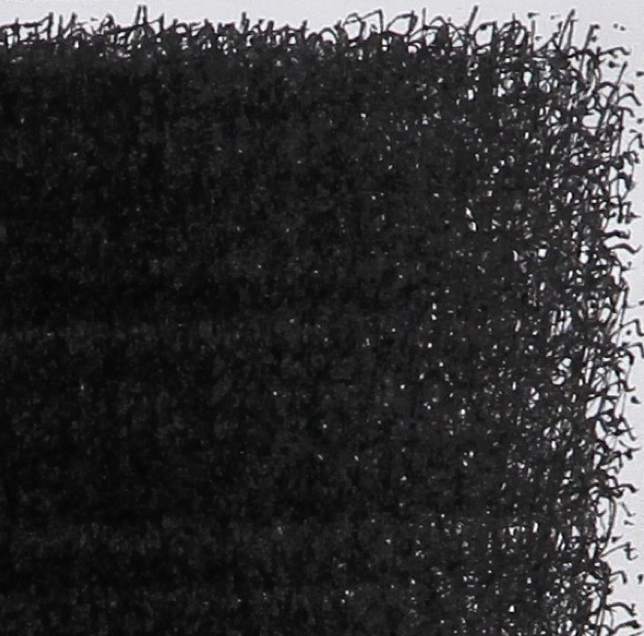 OPP: I think of your work as a series of existential gestures. To be aware of futility and act anyway is a way of asserting that we exist, whether or not it yields results. Are you influenced by Existentialism or any other philosophical or spiritual modes of thinking about existence?

KR: Only in a very broad sense. I read a lot of Sartre and Camus in high school, but I haven't read any explicitly philosophical or spiritual works since then. Seriously. I'm not very interested in reading about thinking. I'd rather just be open to the world around me and do the thinking internally. I actually just looked up "existentialism" to make sure I knew what it meant. Part of me really fights any philosophical associations or terms because it starts to feel too academic, intellectual and potentially alienating for myself and my audience. I'm very wary of exclusionary references to philosophers, authors or schools of thought.

OPP: What or who has influenced your work?

KR: The single greatest influence on my work is a teacher I had during undergrad at Maryland Institute College of Art named Sherman Merrill. He was not a visual artist. The class I took with him was a liberal arts class called "History of Ideas." We studied the Protestant Reformation, U.S. expansion across the Western frontier and the Israeli-Palestinian conflict. He was a tyrant of a teacher, very serious, and he worked us hard. If he saw that your hand wasn't moving to take notes he would yell at you. On the first day of class he told us that when we entered his classroom we were entering the world according to him, and that everything we would be and had ever been taught was subjective. We weren't supposed to question what he was saying to his face but rather know in our minds that what he was teaching us was colored by his own life, even though we were studying historical events. On the short answer and essay exams he gave, we had to begin each answer with "According to Sherman Merrill. . ." We had points deducted if we failed to start our answers this way, even if what followed might be mostly uncontested historical information. It made such a lasting impression on me. It has affected the way I view the world ever since, strengthening my skeptic leanings. Now I move through life with the knowledge that everyone is seeing the same thing slightly differently. I am fascinated by this multiplicity of perspectives. 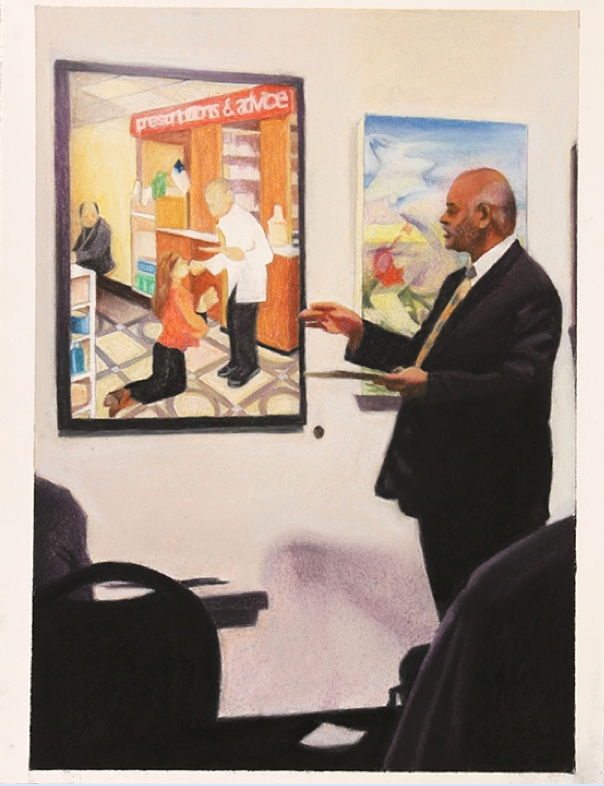 OPP: In your project Searching for Kathryn Refi (2011-2012), you drew the first image that appeared as you typed your name in a Google image search bar, one image every time you added a letter. Here we see that futility of looking for oneself outside of oneself—a trap that many people are caught in in the age of social networks, selfies and Google. Who hasn't Googled themselves? I know I tend to do it when I'm at a loss or lonely. But the project also brings up a more profound truth about the nature of self: the images in that first slot change. Some of them are already different from when you drew them. Was this an intentional part of the project?

KR: Yes, I was aware of the changing aspect of the search results and how the resulting drawings are a record of a definition from a certain place and time. This feels appropriate on a historical and personal level. Yesterday's heretics might be today's sages. What was once a prescribed medicine is now a known poison. As we gain more information, our definitions of people and events change. This includes information gathered objectively through a scientific method or subjectively through personal experience. So many of our definitions are cultural. A culinary delicacy in one region may be considered inedible in another. Our definitions are always changing, which is a positive. It relates to the question of whether or not there are any absolute truths.

OPP: Are there any absolute truths. . . "according to Kathryn Refi"?

KR: I don't know at this point. I think I used to have more of a belief in/need for absolutes than I do now. I would like to say that an absolute truth would be something like "causing someone non-consensual physical harm is wrong." That's fairly certain, right? But what about in self-defense? War? There are always caveats and exceptions and very quickly the waters get murky. 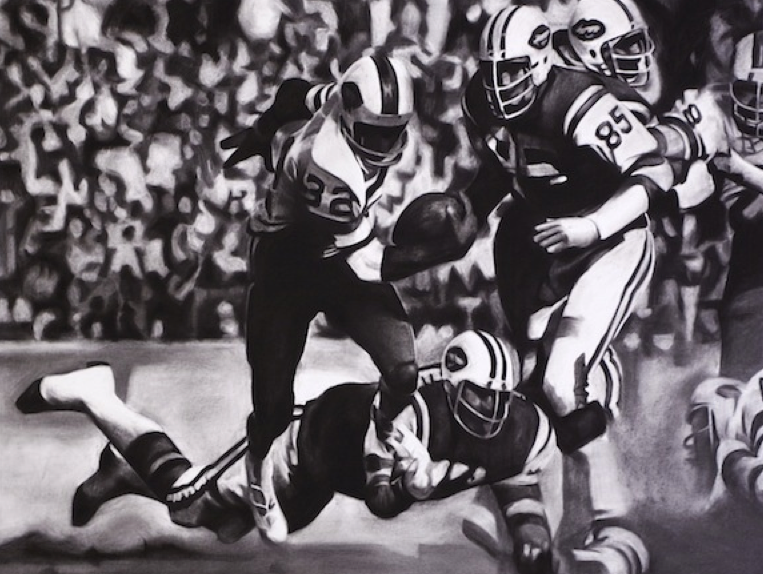 OPP: November 2nd, 1975 is your birthday and the title of a series of drawings based on images sourced from microfilm of newspapers, the internet, and family photos of events that occurred on that date. Again, you take a common musing that most of us have had and turn it into series. As with Searching for Kathryn Refi, you use yourself as a starting point, but the project really isn't about you as an individual. What's it about?

KR: It's about getting outside of oneself and assuming a more global perspective. The date I have always defined as the date of my birth is known to others very differently, if they think about it at all. I use myself and my personal experience as starting points to explore the greater idea of the experience of life. Sometimes I worry the work could be seen as navel-gazing, so I make sure that it has an entry point for viewers that will lead them to think about their own lives.

OPP: In projects like My Address Book (2003), Color Recordings (2006), and Driving Routes (2004) you used your personal experience as a filter for compiling objective data that is translated into visual output, but these projects are less about a personal sense of identity than your recent projects. Do you see these earlier projects as fundamentally different or the same?

KR: That's an interesting question and something I'm circling around the edges of, metaphorically. I don't see the earlier work as fundamentally different, but I've recently become aware that something is changing. A shift is occurring, and my artist statement isn't quite accurate anymore. But I can't yet pinpoint what is happening or why, and I honestly don't want to right now. I'd rather just let the process unfold on its own. Even though all of my work is made within a specific framework that guides the visual imagery, I am always thinking "I have no idea what I'm doing and whether or not this is stupid." So some degree of intuition occurs before I set up the parameters of each body of work. In the midst of it, I can't make sense of it, but maybe in the future I will look back and see the greater context of how the work is developing now.

OPP: I’m really glad you mentioned that sense that your artist statement is no longer quite accurate. I’ve had that experience many times, and I’m sure we aren’t alone. It’s so exciting to feel the deep pleasure of discovery and surrender. But it is so frustrating to have to put it into words before I’m ready, which mostly occurs because of a deadline for an exhibition proposal or a grant application. During those moments, I experience a separation between my art practice and my art career. Do you see these as distinct from one another?

KR: I would be happy if I never had to talk about my art again. (But your questions have been very considered and thought-provoking, so I haven't minded responding to them!) I get frustrated when I am expected to concisely verbally explain what my work is about. It is something that I can't put correctly into words. That is why I am a visual artist, not a writer. Sometimes even I don't know what my work is about. If I always did, I don't think making it would be as interesting for me. I understand that sometimes the viewers wants to make sure that they "get" a piece of art, but I also feel like it's not that simple. It's not a one-liner. And if the work isn't engaging for someone, that's fine, they can walk away. I think we all need to be more comfortable with not knowing.

Somewhat unfortunately, this results in me being a poor advocate for my work. As I am generally not interested in convincing people of anything, I am definitely not compelled to convince someone that my work is awesome and they should buy it or exhibit it. Because, you know, maybe they shouldn't. 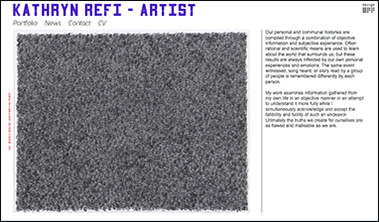