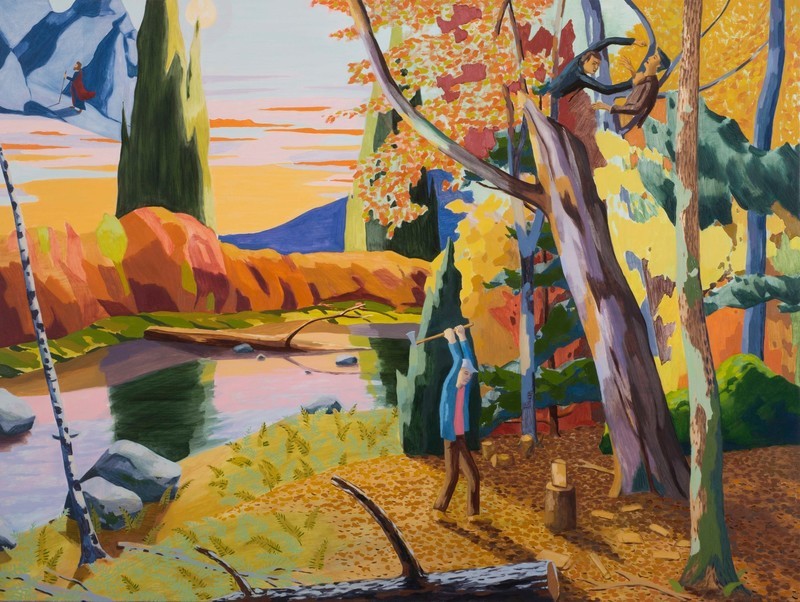 ISAK APPLIN's painted vignettes often depict quiet moments that point to the internal experiences of their subjects. A man chops wood while remembering a betrayal. Solitary figures stroll through the forest in contemplation. Although there is occasional drama—sometimes a man is knifed outside a bar. Regardless, these works balance site with story. His attention to color and texture demands that viewrs take the environments as seriously as the action. Isak earned his BFA in Painting at Maine College of Art and his MFA in Painting and Drawing at School of the Art Institute of Chicago. His numerous solo shows include: Dark Holler (Chicago, 2006) at Contemporary Art Workshop, Six More Miles (Chicago, 2008) at Roots and Culture, Chocorua(Ontario, 2013) at Evans Contemporary, and Now Chicago (Sydney, Australia, 2014) at The Hughes Gallery. Around the Mountain Again, a two-person show also featuring the work of Featured Artist Carl Baratta opened at The New Standard Gallery (Sydney, Australia) in early 2018. He is currently at the Stephen Pace House Residency in Stonington Maine. Isak also runs Titan and Weald, a private press specializing in chapbooks, fine press books and relief prints. Isak lives in Queens, New York.

OtherPeoplesPixels: What’s your relationship to the woods?

Isak Applin: I see the forest as a place of mystery and change.

I grew up in the woods of the Taconic Mountains on border of Massachusetts and New York State. In the 19th century, lumber mills, small factories and sheep farms deforested much of the region. As these industries waned during the mid 20th century a rich forest quickly grew back. And yet traces of the old way of life remained: logging roads, building foundations, stonewalls, mysterious piles of rocks and weathered fence posts were scattered throughout the woods. I witnessed the tail end of this transformation as a child; even then I found it awe-inspiring, disconcerting and sublime.

As a child and teenager, the forest was also a stage for adventure—it was my African jungle, Sherwood Forest and Siberian taiga. Later it was the place for one’s first kiss and precious hours of freedom from school and parents.

The inhabitants of this forested area were also equally fascinating. During the 1970s, the area was settled by Whole Earth Catalog inspired hippies, Vietnam Vets seeking solace and New Yorkers who had always dreamed of owning a horse. It was also a place of big dreams and spectacular and frightening failures. Within a few miles of my house there was a thriving Sufi commune, a huge Indian style Peace Pagoda built entirely by volunteers and a failed nudist colony—it had descended into violent, drug-ridden chaos. I’ve always been extremely fascinated and moved by my neighbors’ eccentric and epic lives. 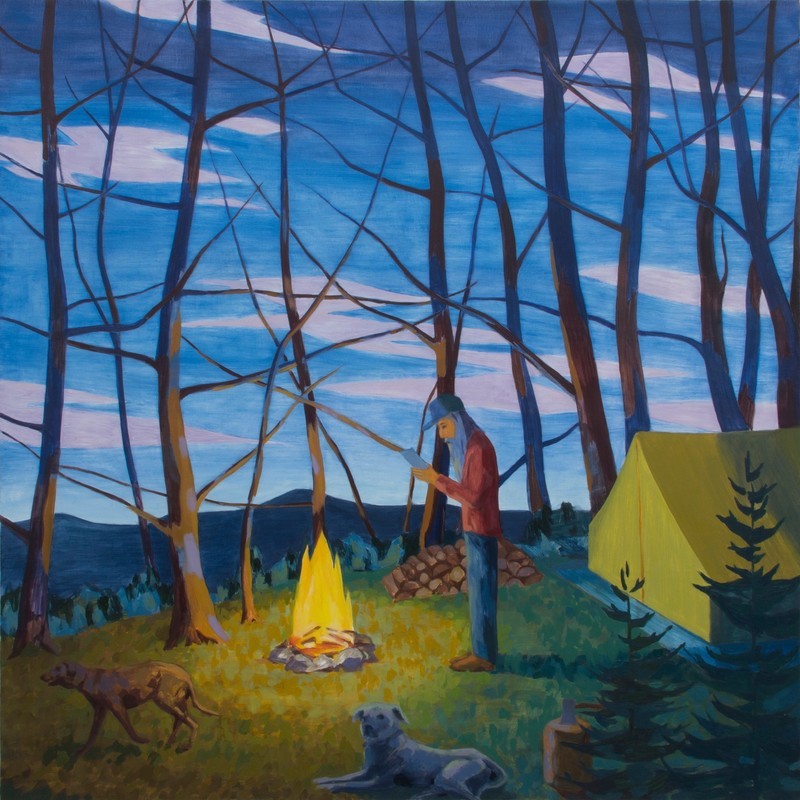 OPP: How you think about the woods when painting?

IA: Many of the paintings attempt to capture the sentiments I described above. They are simply an edited depiction of that landscape or the story set in that landscape. I have always been a collector of stories and situations I find moving, strange and unique. Sometimes, often years after the event, I feel the need to make a painting of one of these stories in an attempt to record and share it. And this is how much of my work is generated: I hear a story or experience something, find myself reflecting on it, and at some point decide that this event needs to be shared with the rest of the world. 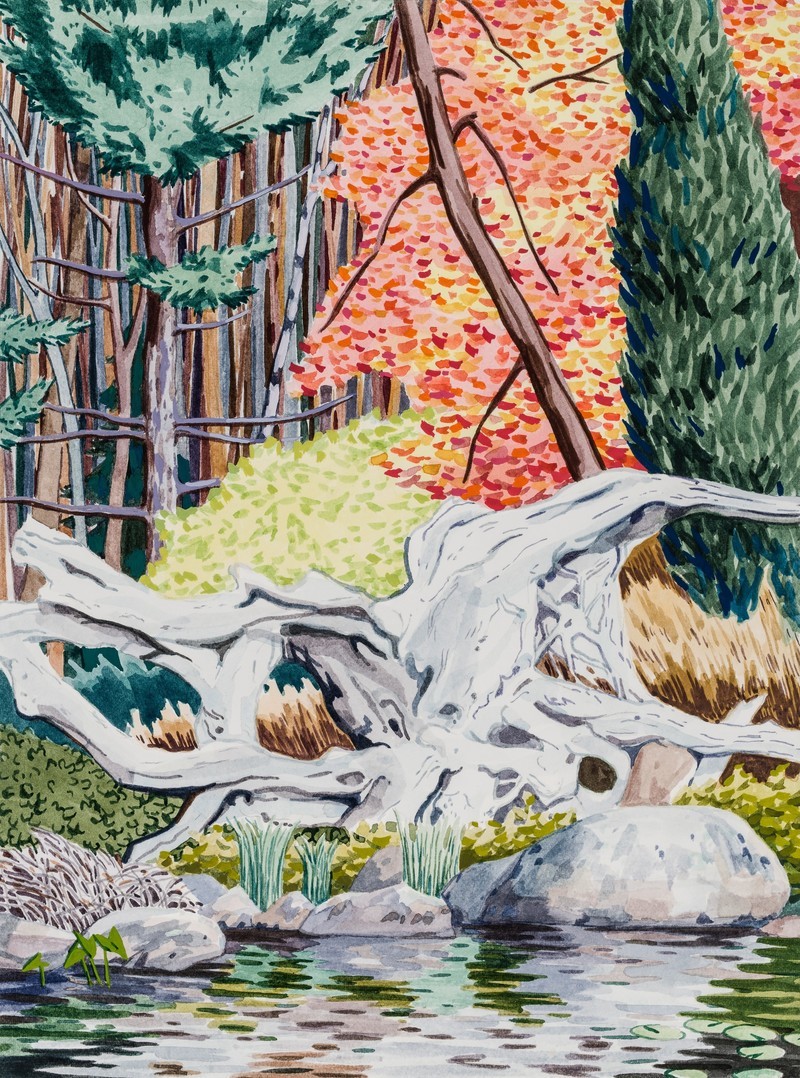 IA: My relationship to landscape paintings is that of a magpie to its nest; I’ll steal from any tradition if it helps me convey the spirit of the story or place I’m depicting! In general, the compositions are largely influenced by Medieval Sienese paintings, Persian and Indian miniatures and various Chinese paintings. Early and mid 20th century European and American modernists often inform my color choices and paint handling. Lately I’ve been under the spell of Monica Poole and Gwenda Morgan, wood engravers from Britain that created marvelously inventive landscape prints. 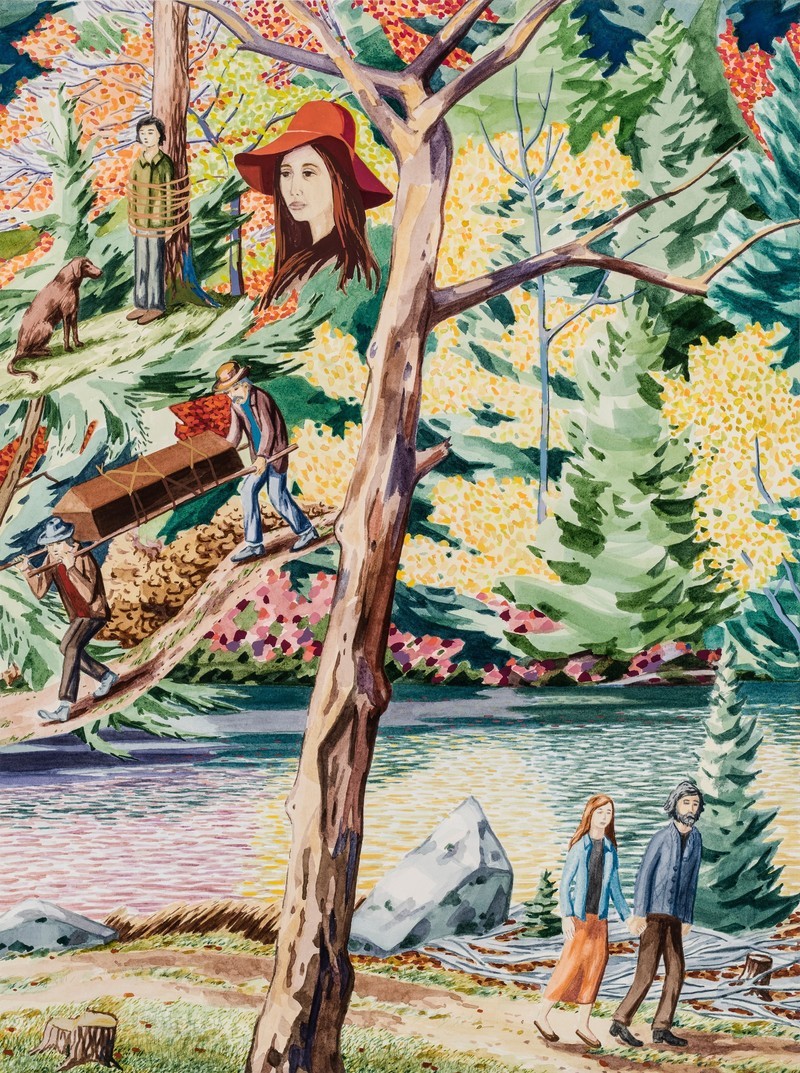 OPP: His Last Night in Randazzo (2018) and Goodbye Jay (2017) have a cinematic quality, in the sense that the scenes floating around the central figure indicate something other than what’s happening in the present moment. I keep flipping back and forth between thinking they are the near future, the distant past or a complete fantasy in the heads of the figures in the bottom of the the paintings. Thoughts?

IA: Both paintings are inspired by true events, and both depict several different points of time within one composition. The events are fragments, and they do not necessarily come together to form a coherent narrative. In these paintings I hope to capture what it feels like to hear the stories (or the storyteller) that I’m working with, rather than transcribe these events into a linear narrative.

Goodbye Jay is a memorial painting, albeit a light-hearted one, depicting events from the life of a friend who was a sailor on research vessels in the Arctic and the South Seas. He lived in a comic book world of maritime violence and South Seas romance. His Last Night in Randazzo is a little less straightforward. I used the space to the left of the tree in the center as a container for vignettes depicting an acquaintance’s escape from Sicily and his flight to Detroit. To the right of this tree is a couple walking down a path in the present day--they are the ones that have to live under the weight of the events on the left.

Fantasy is sparingly added to these compositions, I only include fictional events in the paintings if I feel that it will enhance or clarify the feeling that I’m trying to convey. 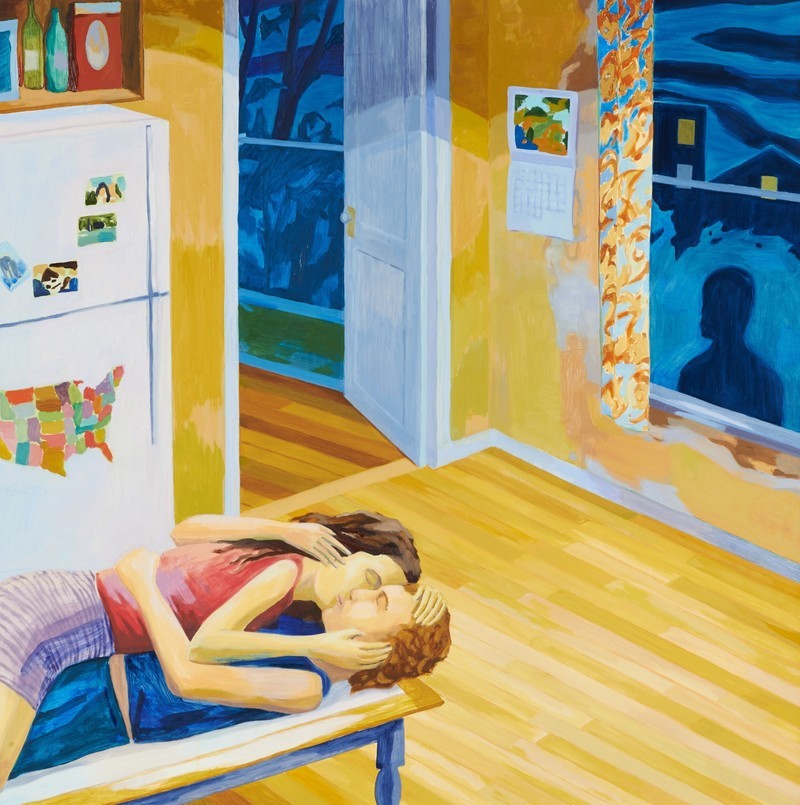 OPP: Can you talk about the recurring themes of being chased, watched or stalked?

IA: The chase themed paintings began in 2012. A friend and I were cycling along a wooded path on a drizzling November afternoon, and we were suddenly chased by an incredibly fast deranged man wearing a cape of burlap sacks. Around this same time everyone in my apartment building was unexpectedly evicted. I started making some drawings of being chased while cycling, and the chase theme became an allegory for forced flight.

The “watching” paintings are about longing, loss and the quixotic behavior of scorned lovers. Like the other paintings, these are based on true events from the distant past that have haunted and moved me. I never really set out to make a painting about being stalked, but I can see how some of the compositions could inspire that interpretation. 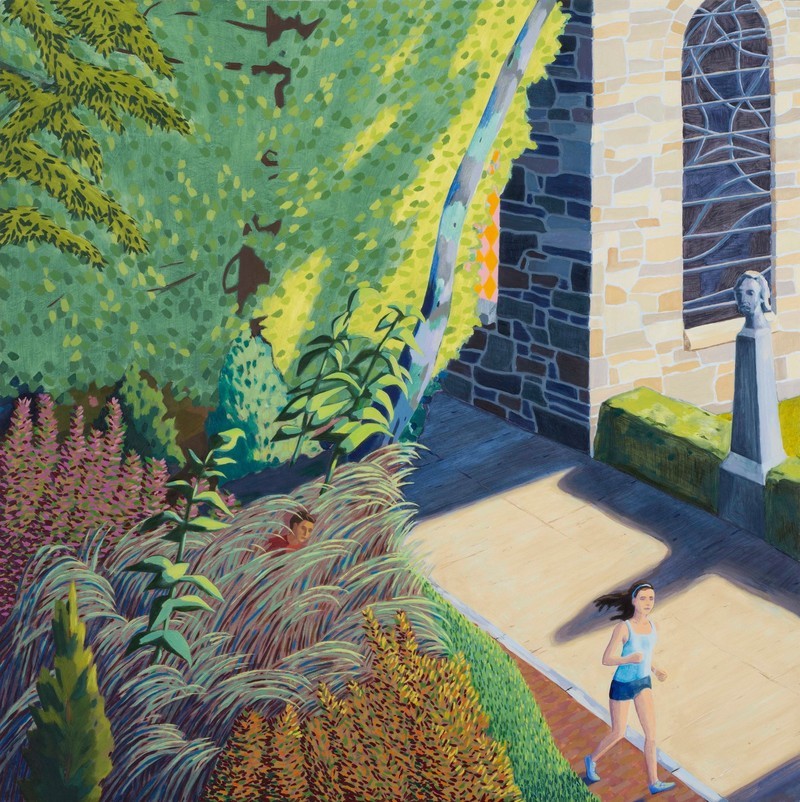 OPP: Tell us about the process of making collaborative prints with Carl Baratta and Oli Watt?

IA: This series started in 2007. One of our primary goals is to create a collaborative piece where the viewer can’t see each artist’s hand. Put another way, we hope that no one will be able to look at a piece and suspect that I drew the bottom, Carl drew the top and the middle looks like something from one of Oli’s prints. To achieve this, we try to draw in each other’s style, we often take turns carving different parts of the wood block, and we generally make all decisions collectively. 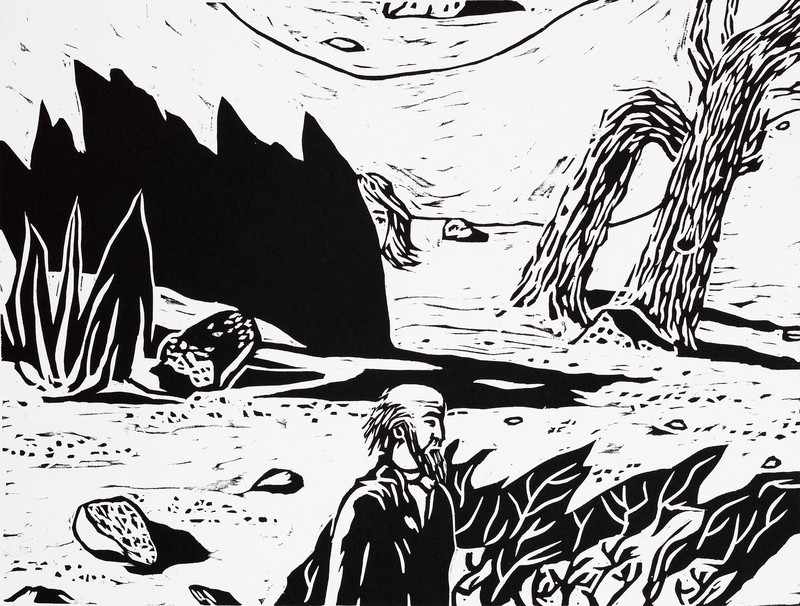 OPP: Did this collaboration teach you anything about your solo practice?

IA: For a long time, the collaborative work was a place where I (we) explored fantastic and mythological themes that were absent from, or didn’t seem to fit into, my personal work. The collaborative prints were a vessel for passages from the epic of Gilgamesh, invented deities and the depiction of other worlds—content that seemed at odds with my paintings set in the contemporary world. To my surprise, in 2014 the apparitions, ghosts and angels from the collaborative prints started creeping into the personal work, enriching it in a way that I could never have anticipated. 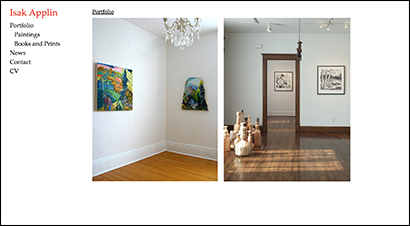