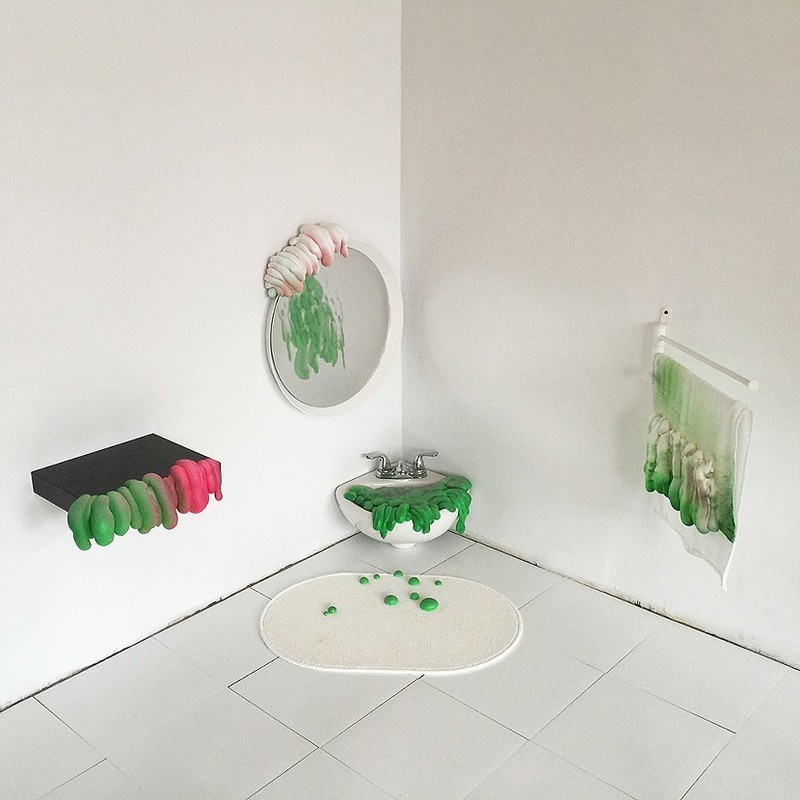 Sculptor INNA BABAEVA explores absurdity, commodity and value systems. She renders mass-produced home furnishings—chairs, hangers and picture frames—non-functional by adding amorphous, hyper-colored blobs created from expanding foam. The resulting sculptures are then placed back into the site where they were first purchased. Inna earned her BFA from Florida Atlantic University and her MFA from Mason Gross School of the Arts at Rutgers University. In 2015, her work was exhibited in Overripe at Trestle Projects (Brooklyn), De Colores at Buggy Factory (Brooklyn) and Family Ties at 500X Gallery (Dallas). In 2006, she was awarded a Joan Mitchell Foundation scholarship and has been an Artist-in-Residence at Atlantic Center for the Arts (2006) and Sharpe-Walentas Studio Program (2014). Inna lives and works in New York City.

OtherPeoplesPixels: When did you first begin to work with insulating foam?

Inna Babaeva: I started working with insulating foam about five years ago. I came upon using this material by chance. I was creating a site-specific installation where 400 hollow silver balls were floating in the water at a local park on the East River. To keep the balls from sinking, I filled them with this expandable foam, which is light and waterproof. I rejected a few balls for the installation because they overflowed with the foam but the shapes formed by the expanded matter looked very intriguing. It has been included in my material inventory since then.

OPP: What do you love about the material? What are the challenges?

IB: The foam possesses a very non-conformist, almost volatile energy that fascinates me. Working with it is like having a contest. It changes volume and responds to gravity in unforeseeable manner. I have to respect and control its behavior simultaneously. It expands, often in unpredictable directions and then hardens suddenly into wacky and often provocative configurations. It is very time sensitive process since the amount of released foam and the length of time before applying the next layer are very important. It usually takes a few weeks to finish the foam part so I work on several pieces simultaneously. 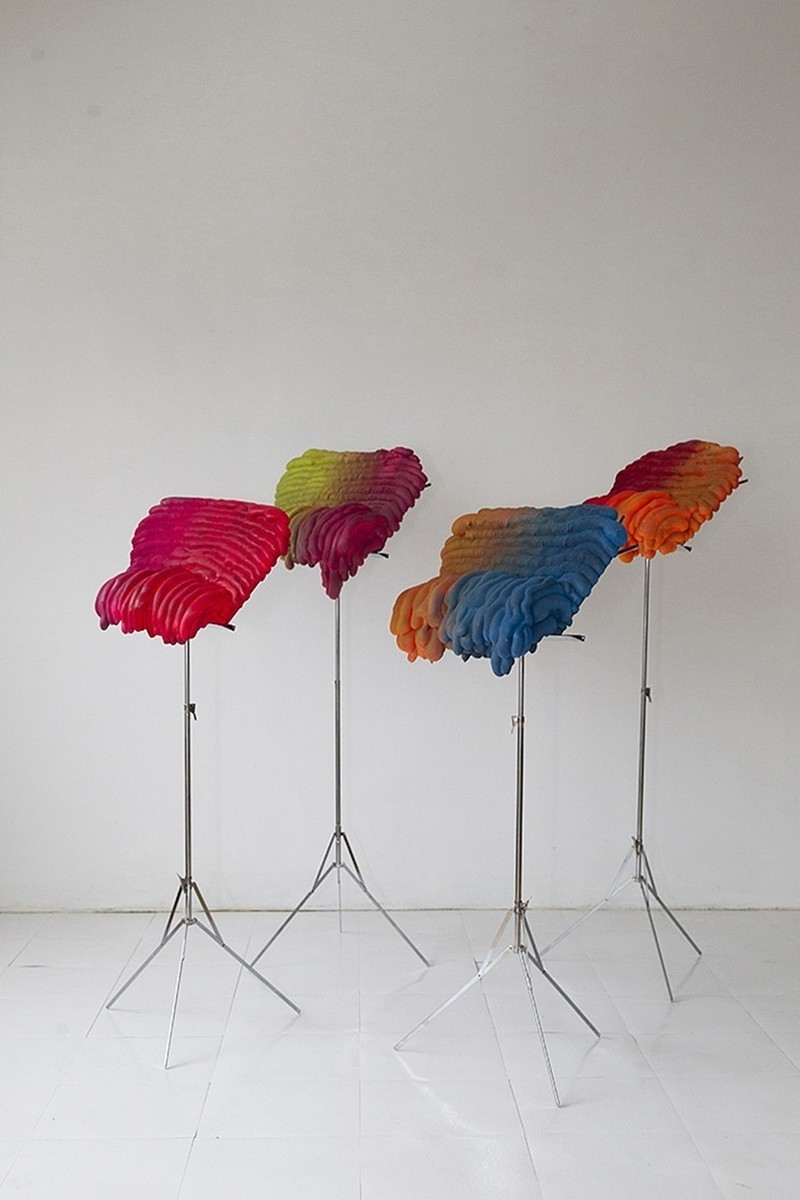 OPP: In many ways your sculpture is minimal, discrete. But your palate is not. Tell us about what you love about color and how it operates in your work.

IB: I have been fascinated with examples of modern design and architecture for a long time. I was probably twelve years old when I stumbled onto a book about Alvar Aalto. It made a very big impact on my future artistic preferences. The modernist sensibility has been always present in my work.

Color came to my work after I moved to New York City. Maybe it was an antidote to the predominantly monochromatic, slate cityscape. Or maybe it was the many hours that I spent on Canal Street searching for materials for my sculptures. Canal Street has all these industrial goods stores with plastic, metal, rubber and an enormous number of tiny shops with low grade, mass-produced accessories like sunglasses, umbrellas and hats. There is a deluge of color there, and it was irresistible.

I started using spray paints in my sculptures. It is the most exciting part of their completion, but I don’t rush into painting. I like to live with the foam forms before I know what shades they should be. It always surprises me how the shapes transform after being spray-painted and how they come to their “trippy” existence. 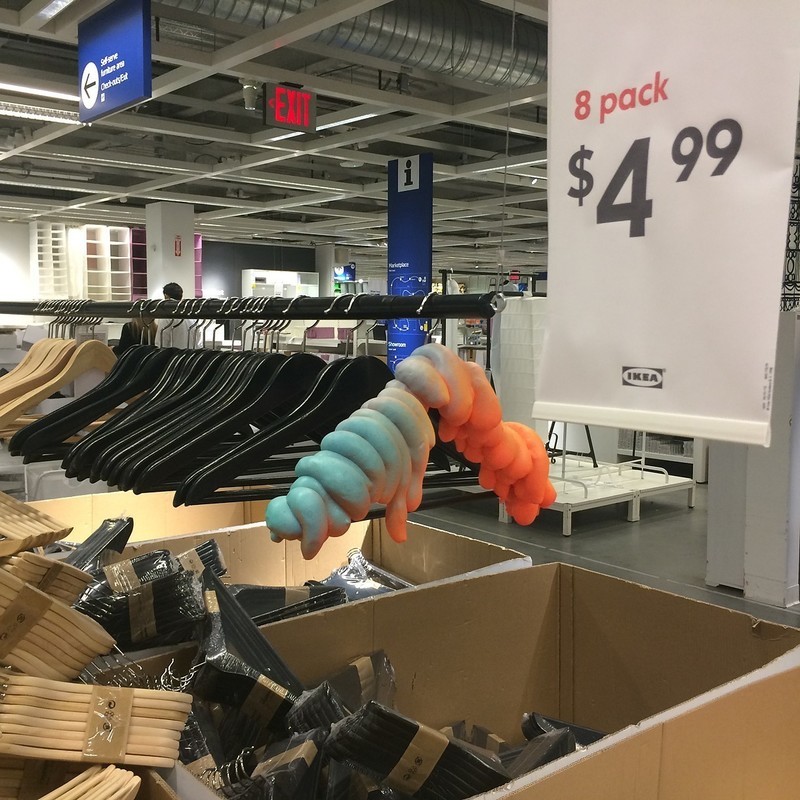 OPP: Was IKEA Invasion always part of the plan for your sculptures of insulation foam overtaking or sprouting from home decor objects like clocks, picture frames and lighting fixtures? Or was the intervention an idea that came after making the sculptures?

IB: About a year ago, while shopping for some household items at IKEA, I realized that almost every object there was a great beginning for a sculpture. I started buying these items—clocks, chairs, mirrors, shelves, rugs, picture frames and coat hangers—and turning them into sculptures. As I made more and more, I began to think about how an inexpensive household object augmented into a work of art steps into the different value system. Its value is increased. But what if the artwork is returned to the store location? What would happen to its value? I thought it would be a reversed Duchampian gesture to display the sculptures back in IKEA, in their original setting. During a studio visit I shared my thoughts with my friend. He said, “Why don’t you just do it guerrilla style?” So I did. 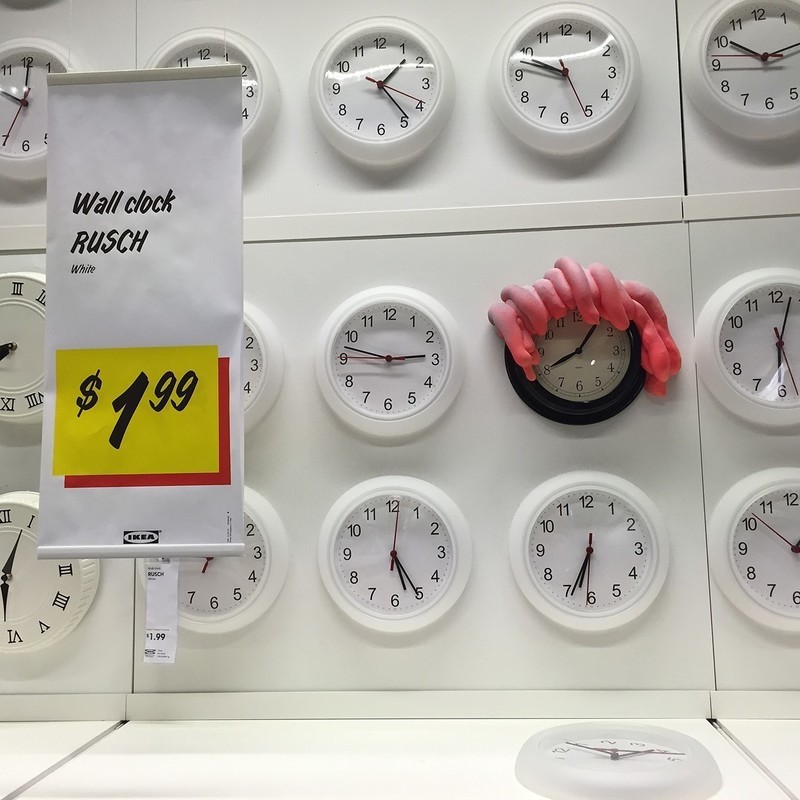 OPP: Tell us about the experience of getting the work back into IKEA. Did you stay to watch shoppers interact with your work? Did anyone try to buy it?

IB: IKEA Invasion is an ongoing project, a contemplation on the value of artistic production and how much it depends on the context of its presentation. The first time that I brought my sculptures to the store, I was a bit nervous. I rolled them, anxiously, to the show room in a shopping cart. To my surprise, no one seemed to pay any attention to me putting the sculptures on display. I spent about an hour installing, photographing and observing people’s reactions to the intervention, but everybody was just going about shopping. Only one customer seemed to be interested in my chair sculptures. “Are those for sale or just for display?” she asked a clerk passing by, who just indifferently shrugged his shoulders. He was in a rush to straighten out the showroom before the store was closed. As the announcement sounded that, “the store is now closing,” I packed my sculptures back onto the shopping cart and proceeded to the exit. It was a challenge to pass by checkout employees on the way out and explain what was in my cart and why I don’t have a receipt for any of it. Somehow, my reasoning was accepted and I got through it ok. My next installment of the IKEA Invasion may take more preparation and some legal permits, as I would like to proceed with a video documentation. 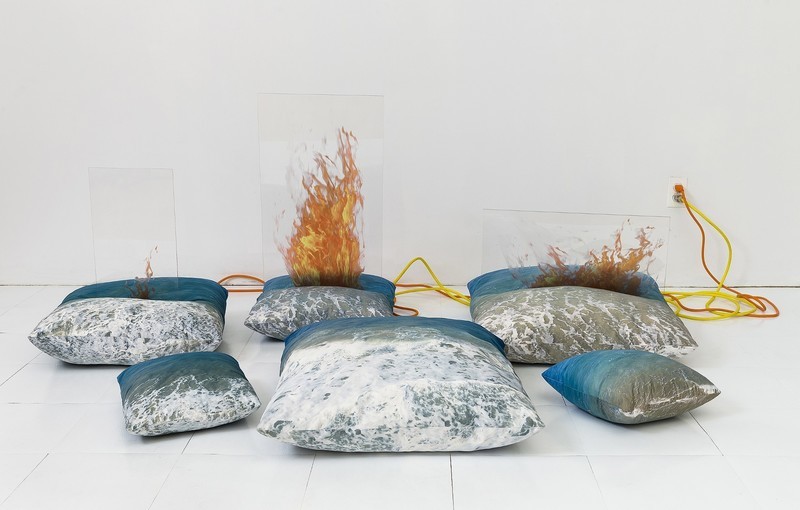 OPP: Another staple material in your work is plexiglass as a substrate for painted marks, as in your series Backstories (2015).  Will you talk about my favorite piece from this series, Did You Ever Pet a Lion? I read the plexiglass paintings as campfires. What purpose do the electrical cords serve?

IB: Transparent Plexiglass is such a great invention. I love working with it, since it allows me to create some illusory effects. Images that are printed on a flat surface can exist in three-dimensional space. In Take a Chance, transparent plexiglass allowed me to tease the viewer with not only spatial dimensions but also with the chronology of a feathers' fall.

Did you ever pet a lion?  was born as a result of the convergence of two things that I love to do: watching ocean waters and watching a bonfire. Why can’t I look at both at the same time? I printed the images of ocean water on fabric and made pillow covers from it. Pillows are an emblem of domestic comfort for me. I printed images of bonfires on Plexiglas and attached them to pillows. The thought was to create the illusion of the fire emanating from the ocean. I attached electrical cords as a source of ignition to keep an abiding fire.  It sounds preposterous, but absurdity was always an essential theme of my work. 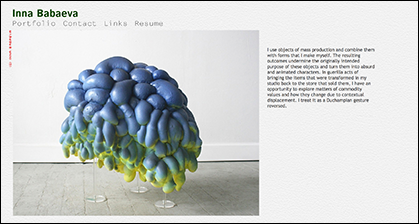