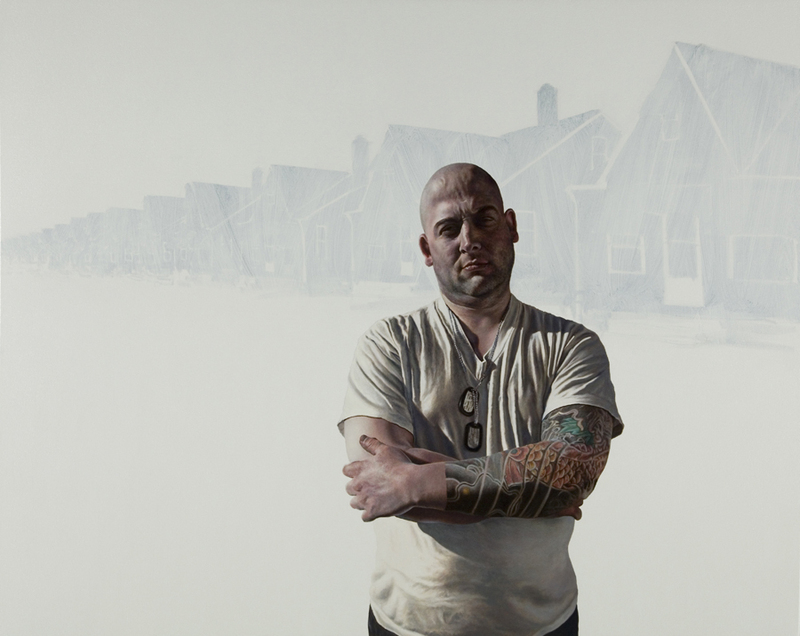 FRANK ORITI paints psychologically and emotionally honest portraits of “blue-collar, middle-class individuals returning to the hometowns and neighborhoods that they originally attempted to escape.” The juxtaposition of meticulously-detailed figures with flat, hazy backgrounds conveys a sense of limbo and highlights a nuanced experience of conflicted resignation and bold confidence in the face of uncertainty. Frank received his BFA from Bowling Green State University (2006) and his MFA from Ohio University (2011). His solo exhibitions include Return (2011) at The Bonfoey Gallery in Cleveland and Homeland (2013) at Richard J. Demato Gallery in Sag Harbor, New York. In 2013, he was the recipient of the Cleveland Arts Prize Emerging Artist Award. From September 13, 2014 to January 4, 2015, his work will be included in the group show Get Real: New American Paintings at the Museum of Contemporary Art in Jacksonville, Florida. Frank lives in Cleveland, Ohio, where he was born and raised.

OtherPeoplesPixels: Many of your paintings are based on your friends and family. These paintings are portraits in the traditional sense. But the individuals can also be viewed as symbolic of the "psychological state of settling," which you identify as a major theme in your work. Did this theme emerge from the individuals you chose to paint or did you seek out subjects that embody the theme you were interested in exploring in your work?

Frank Oriti: Originally the theme came from my own realization of what it was like to return home. After I received my BFA from Bowling Green State University, I didn’t really have a plan for the next chapter in my life. Things just seemed very uncertain. Around the same time, I realized that a lot of friends and family had also returned home from college and the military. So naturally, I wondered if they were experiencing the same thoughts and feelings about this return that I was having. Because the theme was sparked by my own sentiments, I think of these paintings partially as self-portraits. 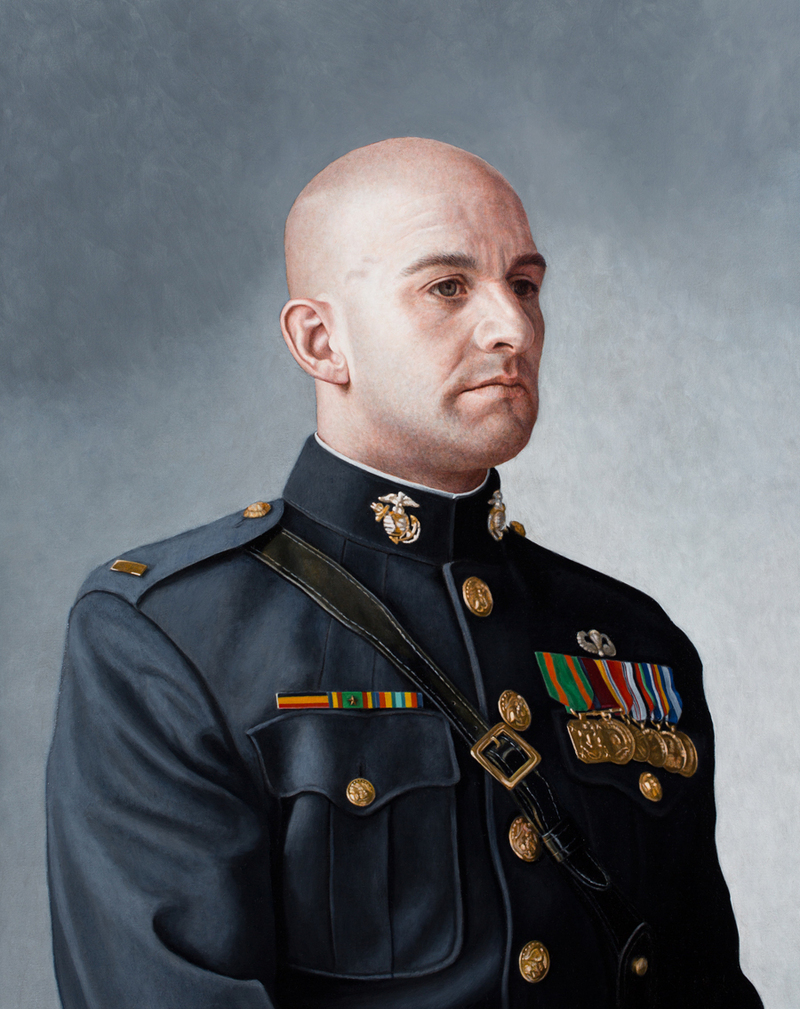 OPP: Your blue-collar background and the fact that you worked at Cleveland's American Tank and Fabricating between undergrad and grad school are often cited in the intro paragraphs of interviews and reviews of your work, and I'm obviously bringing it up, too. The return home is a theme in your work, so your personal biography is relevant. Do you think critics, collectors and viewers romanticize these details? Or is this just a reasonable reference to details that inform the content of your work?

FO: I don’t really think it’s my place to say whether or not my personal history is being romanticized. I think any time a writer is doing a piece, it’s up to them to write something that will hopefully entertain and keep a reader’s interest. All I can do on my end of interviews and in talking about my work is be honest and tell my story. I was taught that, as an art-maker, it’s important to be honest about where your work is coming from and why you’re making it. I DO think that my post-undergrad time at home really sparked something. The thoughts and feelings I had during that time became a great reference point for what I was trying to say in my work when I started these portraits in graduate school at Ohio University. 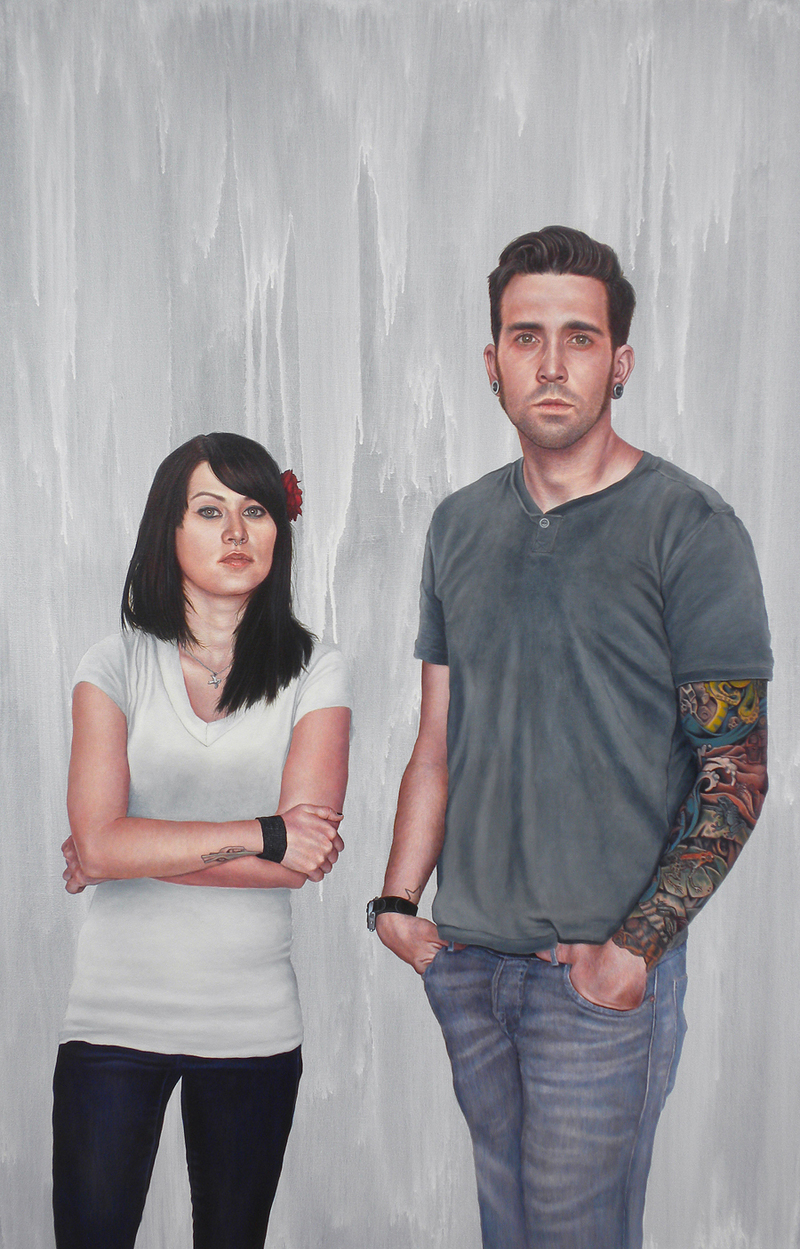 OPP: Now that viewing artwork online is so common, one of the details that sometimes gets lost is the impact of scale. I experience so much artwork contained within my computer screen that I can only imagine what my physical response to seeing the work in person would be. Could you talk about the significance of scale in your work?

FO: I originally made these portraits at a true-to-life scale. I wanted the viewer to be drawn in to the gaze of the subjects. It was important for the viewer to relate to them as actual people, as much as possible, just by looking. Since the beginning of this series, I’ve always made portraits that gave off the presence of an actual person—portraits that were more life-like than a photo but stayed true to my representation of the individual at that time the work was created. More recently, I’ve found that by changing up the size of the painting, I’m able to experiment and have more fun with the format as well as the actual application of the paint. 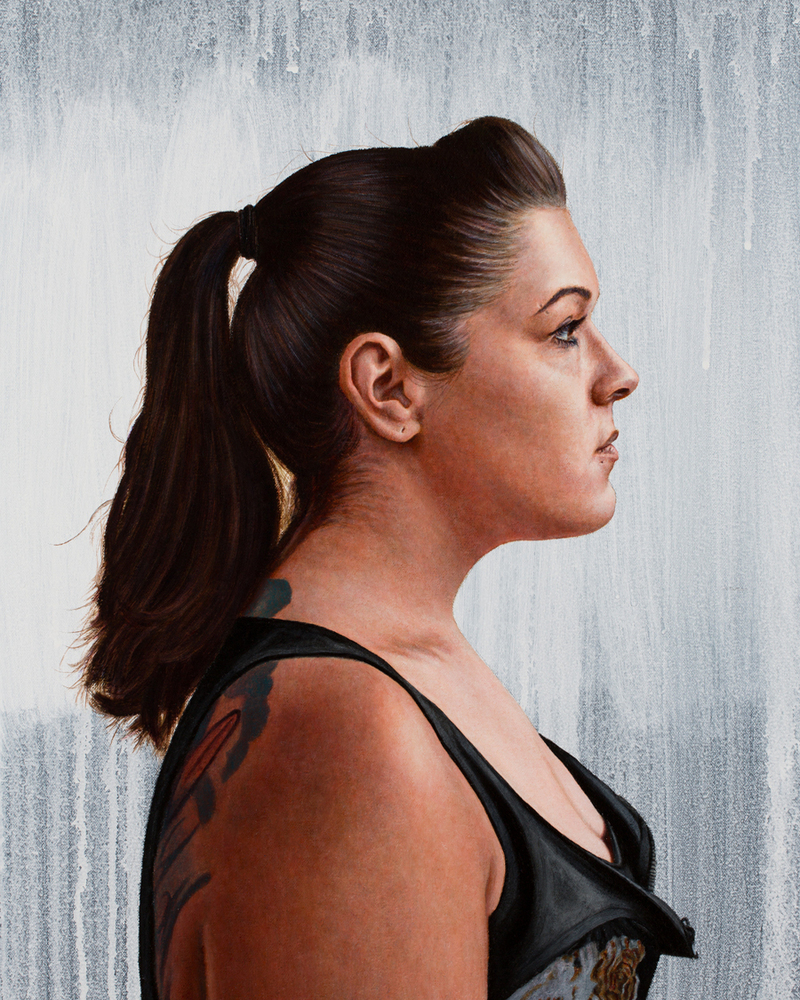 OPP: Clarity (2014), Uniform (2013) and Without (2013)—among others—stand out because the subjects are painted in profile, as opposed to confronting the viewer with their confident gazes. These immediately brought to mind mugshots, although nothing else about the subjects evokes criminality. Could you talk about your choice to paint these subjects this way?

FO: I’ve always loved looking at the way portraits have been depicted through history in painting, and I wanted that appreciation to show through. I was thinking about how the figures in this series previously had their backs turned to the whited-out houses that represented our suburban landscape. Painting them in profile reveals the position of uncertainty: they are neither heading towards the landscape nor heading towards the viewer.

OPP: In 2013, you won the $10,000 Cleveland Arts Prize for Emerging Artist. What was your first reaction when you heard the news?

FO: It sounds extremely cliché to say I really did not expect to win, but. . . I REALLY DID NOT EXPECT TO WIN! It was only my second year submitting. After seeing winners from previous years, I understood the winners were chosen from a very wide selection of the different categories of arts in town. As someone who is constantly submitting to competitions, shows and magazines, I try not to get too worked up about entering these sorts of things. You have to do your part to enter and then forget about it and get back to work so that you’re not stressing over it. When I received the call last year that I had won, I was speechless. It was a great thing to be recognized by my peers, especially in my hometown. It’s overwhelming to be a part of such a prestigious group of past winners. 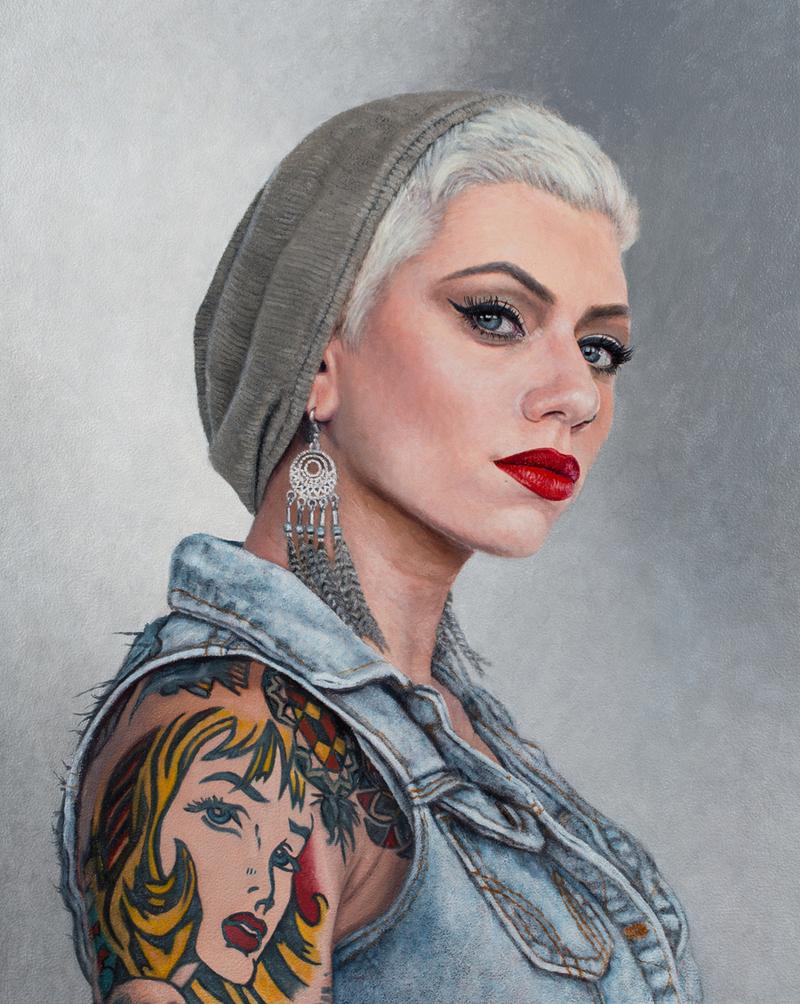 OPP: Practically speaking, how has this prize affected your art practice?

FO: When the art prize came along, I had just left my part-time job to concentrate on painting full time. I had also just moved into a studio space in Cleveland. So winning the prize was perfect timing. It helped out financially, allowing me to concentrate only on my painting as I was getting ready for my first solo show at Richard J. Demato Gallery in New York.

OPP: Now that you are a few years out of graduate school and many of the subjects of your paintings are also older, has the overall level of uncertainty shifted? Have you experienced anything new that might change the emotional nature of the portraits?

FO: I think now that I've become a little more settled in Cleveland and a little more comfortable with the work I'm creating, some of the issues I was dealing with when this work began have shifted slightly. I've gravitated more towards finding people I know who apply a blue collar work ethic to whatever it is that they do. I really enjoy connecting with hardworking people who know what it is like to put in a lot of time and effort into their jobs, even if they aren't the most glamorous jobs. It's that type of work ethic that I use daily in the studio, and I find it extremely inspiring. 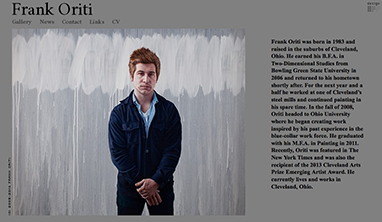 To view more of Frank's work, please visit frankoritijr.com.
Featured Artist Interviews are conducted by Chicago-based, interdisciplinary artist Stacia Yeapanis. When she’s not writing for OPP, Stacia explores the relationship between repetition, desire and impermanence in her cross-stitch embroideries, remix video and collage installations. She is an instructor in the Department of Fiber and Material Studies at The School of the Art Institute of Chicago, where received her MFA in 2006, and was a 2012-2013 Mentor-in-Residence at BOLT in Chicago. Recent solo exhibitions include I Still Haven’t Found What I’m Looking For (2013) at Klemm Gallery, Siena Heights University (Adrian, Michigan) and Everything You Need is Already Here (2014) at Heaven Gallery in Chicago. Stacia is currently looking forward to creating a site-responsive collage installation in her hometown. NEXT: Emerging Virginia Artists opens on July 11, 2014 at the Peninsula Fine Arts Center in Newport News, VA.