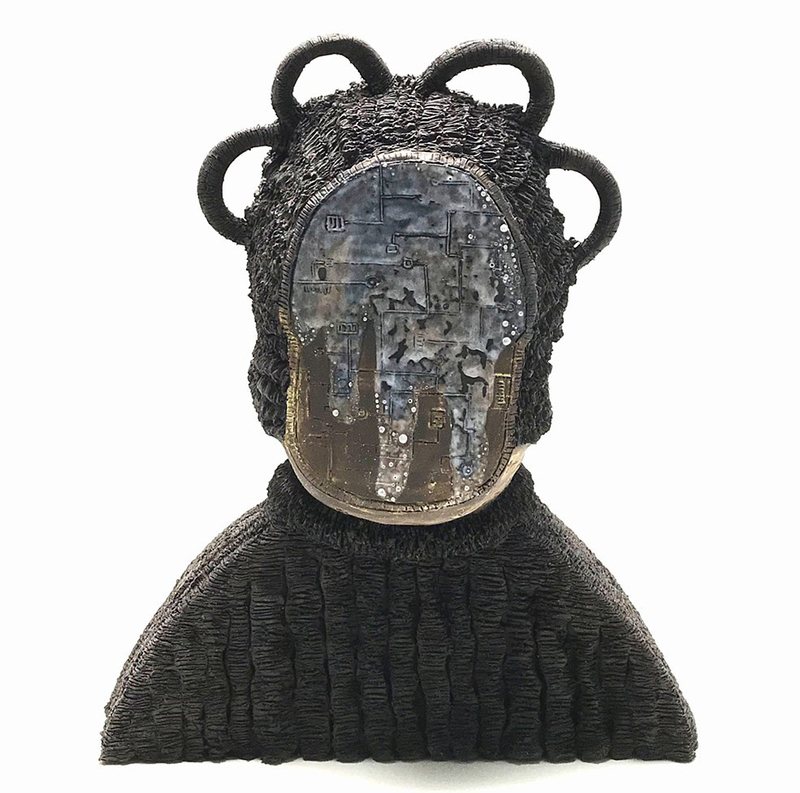 Influenced by science fiction, history and hip-hop, DONTÉ K. HAYES works in the spirit of Afrofuturism. His hand-built ceramics allude to the black body through texture and color, while his titles refer to both the imagined possibilities and the historical truth of the African Diaspora. Donté earned his BFA in Ceramics and Printmaking at Kennesaw State University in Georgia and is currently an MFA candidate at The University of Iowa. In July 2019, he was an Artaxis Fellow at Haystack Mountain School of Crafts and he received a Zenobia Award to attend Watershed Center for the Ceramic Arts, where he is currently in residence. Funkadelic Awakening: A Futuristic Resistance, a three-person show with Featured Artist Jennifer Ling Datchuck and Salvador Jiménez-Flores, just closed at The Clay Studio in Philadelphia. Donté has three works on view in the DUMA Biennial—juried by Sarah Humphreville, Senior Curatorial Assistant at the Whitney Museum—at the Dubuque Museum of Art through September 8, 2019, and he will have solo exhibitions at Garner Narrative (Louisville, Kentucky) and Iowa Ceramics Center and Glass Studio (Cedar Rapids, Iowa) in 2020. Donté lives and works in Iowa City, Iowa.

OtherPeoplesPixels: When did you first begin working in ceramics?

Donté K. Hayes: In 2015, I went back to college in my late 30s to study Drawing, Painting and Printmaking at Kennesaw State University in suburban Atlanta. I needed a three-dimensional art class to meet the requirements for a BFA in Printmaking, so I decided to take Ceramics 1. 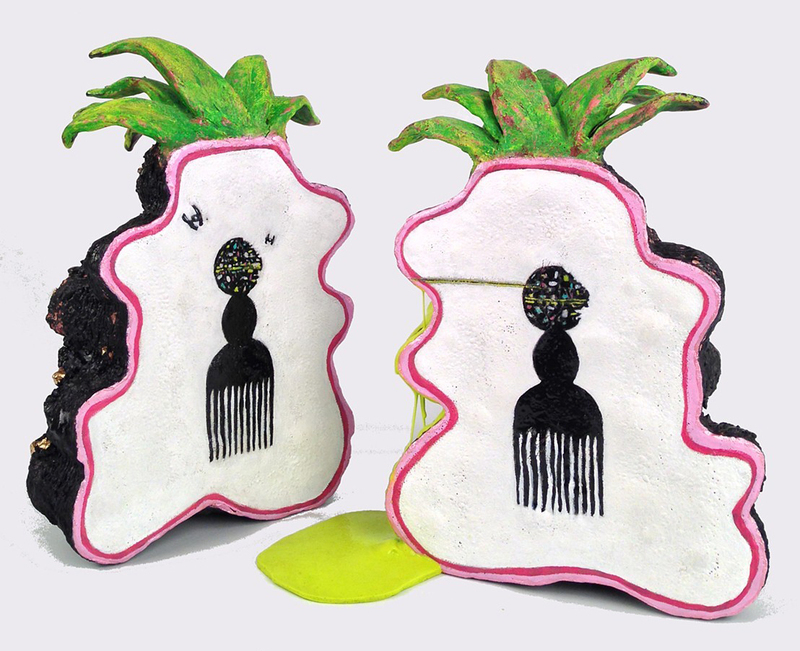 OPP: What do you love about clay?

DKH: My love of clay came immediately because the material forces you to remember that you are not in control, especially on the potter’s wheel. I’m definitely not a potter. Creating in clay is hard and challenging and registers the history of my hands throughout the working process. I enjoy the ritual of my hands and clay becoming one through the process of repetition, texture and pattern when making a ceramic object. Clay takes me places in the past, brings clarity to the present and takes my thoughts and desires to the future. 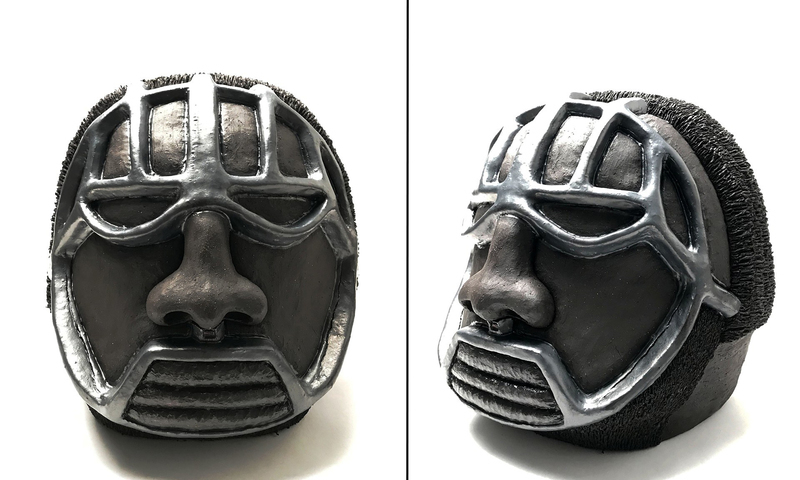 OPP: What are your favorite sci-fi texts?

DKH: Growing up, I was a big comic book and sci-fi nerd. My favorite comic books were from the Marvel Universe. I collected all the Spider-Man books, Avengers, X-Men, X-Factor, and my favorite being Black Panther. I’ve been a Black Panther fan way before the movie. Stan Lee and Jack Kirby nurtured my love for art and storytelling. Black Panther showed that a black man can be a strong leader, intelligent, and a hero for his people and all of humanity. Ray Bradbury’s Fahrenheit 451 continues to resonate with me and how I perceive the future and present day. For example, the “parlor wall” is eerily similar to the flat screen television or cell phone which promotes the propaganda and news of the day. The movies that have influenced my concepts of the future are the Star Wars saga, the German dystopian movie Metropolis and Gattaca. My favorite television shows are the Star Trek universe, specifically Star Trek: Next Generation, and Dr. Who.

OPP: And your Afrofuturist influences? 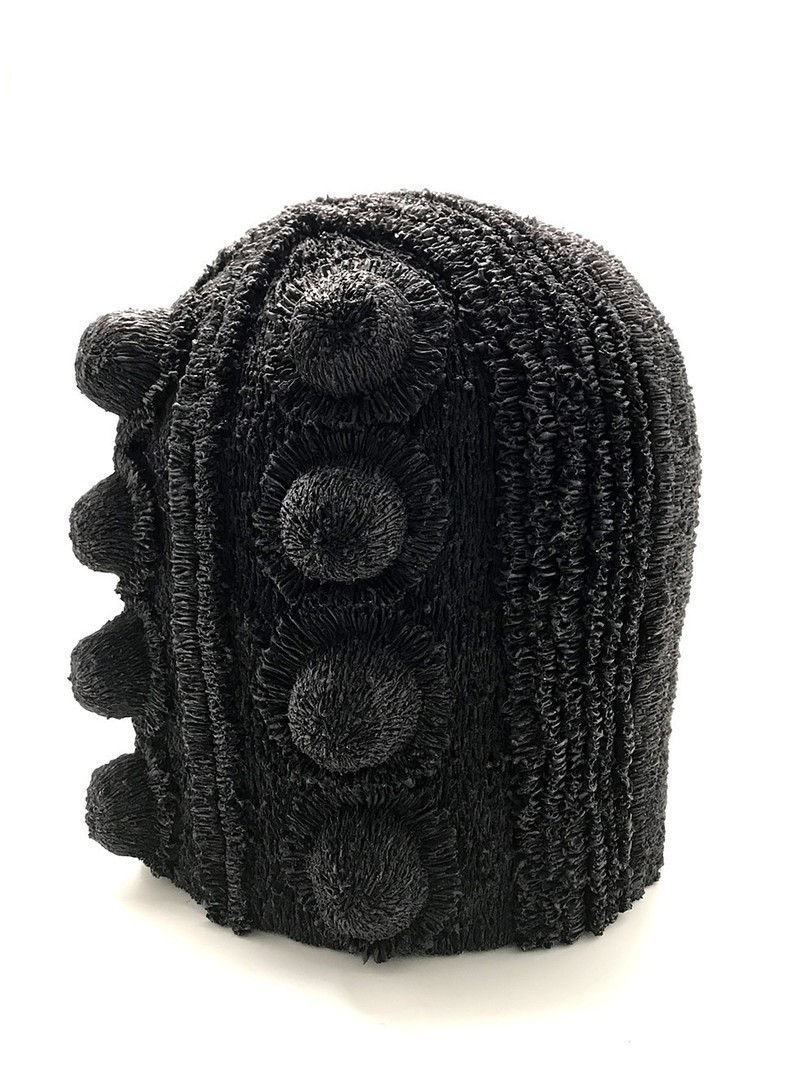 OPP: Your all-black, textured ceramics are really exciting because they resist being static objects. Some have clear cultural references, for example, Dalek. Others, like Baby Boom and Seed, feel like abstractions. Are all of these based on the symbol of the pineapple? What's compelling about this symbol for you?

DKH: Yes, they are first based on the pineapple and then connected to my own influences and thoughts. The use of the pineapple is very important to the work. I’m from Atlanta, Georgia, and the pineapple is a prominent symbol in the south. I have always been fascinated about its origin as an icon for welcoming and hospitality.

Currently, I am a third-year graduate student at the University of Iowa. Moving from Atlanta to Iowa City has been a hard adjustment. As an African-American and a person of color in a non-diverse city, I’m confronted with the rituals of creating a hospitable environment in my everyday routine. The pop cultural references bring the pineapple symbolism to the present day. For example, Dr. Who’s Daleks are a fictional, extraterrestrial race whose purpose is to “exterminate” all life in the galaxy they deem inferior. Works like Baby Boom and Seedexplore the narrative of how the cultivation of the pineapple created a boom of wealth and power from the blood and backs of enslaved people, while also speaking to the continued contribution of black people and people of color to growth and change in society. The human desire to find a place to belong and call home is universal. 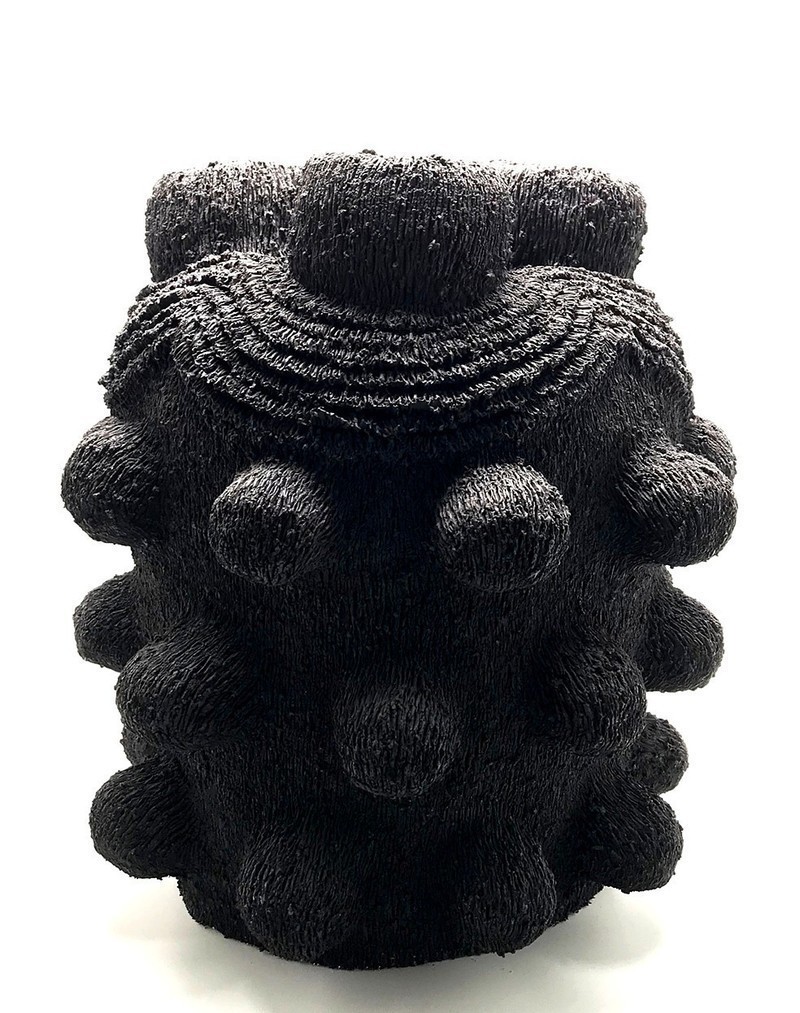 OPP: In looking at works like Arrival, Welcome, No Welcome and Dalek, I’m thinking a lot about what could have happened, had European explorers had the Star Fleet’s Prime Directive, and what did happen—i.e. the violent conquest of non-Europeans, the theft of territory, the pillaging of natural resources and the enslavement of Africans in the Americas. How do these works speak to the historical truth and the speculative possibilities of first contact?

DKH: The sculptures you mentioned are about people of African descent during the Middle Passage. The Middle Passage was the forced voyage of enslaved Africans to the New World as part of the Atlantic slave trade. Through my research, I have learned that the origin of the pineapple as an symbol of welcoming and hospitality is rooted in slavery and agricultural colonization of the Caribbean, South America, and the Southern United States, in particular, South Carolina and my home state of Georgia. When a new slave ship bringing enslaved Africans docked at the port, the dock foremen would place a pineapple at the front of the dock to announce that a new shipment of enslaved Africans had arrived. Thus creating the pineapple as a symbol for welcoming.

To further the concept of welcoming, I wanted to create a texture that reinforces the tactile feeling of being warmly embraced. Each sculpture is inspired by the textures in raffia, hair, fabric, carpets and tapestry. These ceramic objects are vessels, each making symbolic allusions to the black body. So through this work, I’m reinterpreting past history to critique the present and give hope to the future. 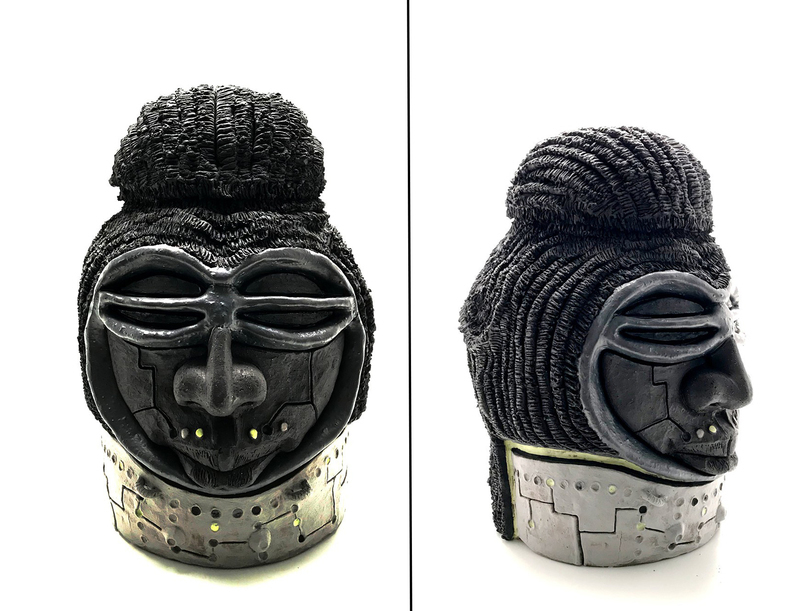 OPP: How do the True Kingz connect the West African tradition of Benin Heads to American Hip-Hop?

DKH: The Benin Heads are Oba, which means ruler or king. Each Benin head was a portrait of how that king wanted to be represented to the masses. The strength of a king is how they can inspire or be the voice of a nation. In the history of hip-hop, the M.C. or master of ceremony has become a cultural king who speaks to this generation’s pain, joy, desires and interests. Hip-hop has become the voice of the people who listen and are inspired by its music. However, not all kings are wise, thoughtful and benevolent to their constituents. Likewise, there are criticisms that can be made about some of the misogyny, violence and glorification of money and materialism in Hip-Hop culture. The True Kingz series is a nuanced physical legacy of the good and the bad in empire worship. 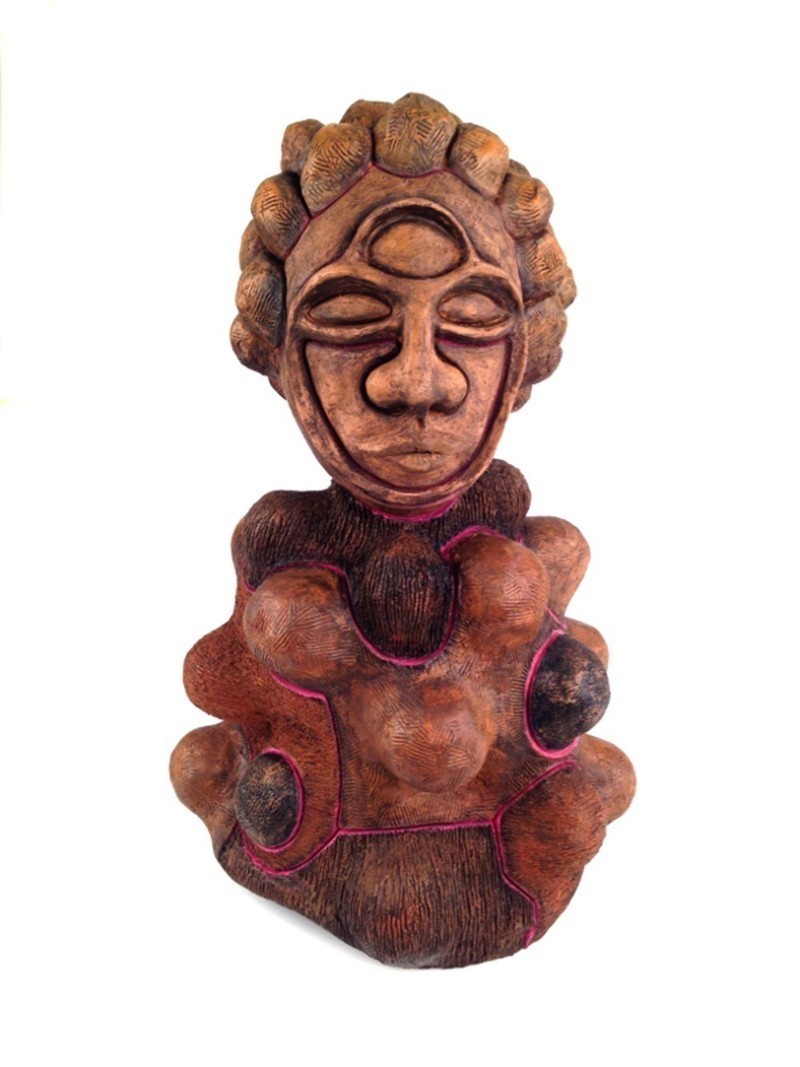 OPP: Afrodisiac (2018) stands out visually from all the other sculptures. Is this a one-off or a new direction?

DKH: Afrodisiac is a transitional piece that bridges the True Kingz series and my abstract pineapple sculptural forms. I was at the early stage of my research, so the work is made in a very literal manner. The work is informed by the art historical painting by French Canadian artist François Malépart de Beaucourt, titled, Portrait of a Haitian Woman (1786). This painting is believed to be created in the French colony of Saint-Domingue—now Haiti—before the revolution. The painting depicts an enslaved African woman holding a bowl with pineapple and other fruit while one breast is exposed and hanging out of her dress. The work speaks on multiple levels to past and present depictions of black women in art history. Both the pineapple and the black woman have been used to portray the exotic, status, wealth, power, and abundance. I wanted to create a sculpture which elevates the black woman’s importance as the origin of life and symbol of unconditional love and strength. 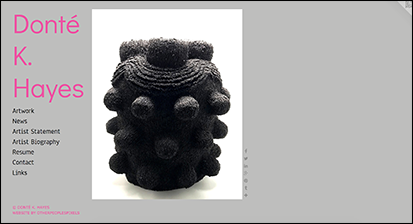