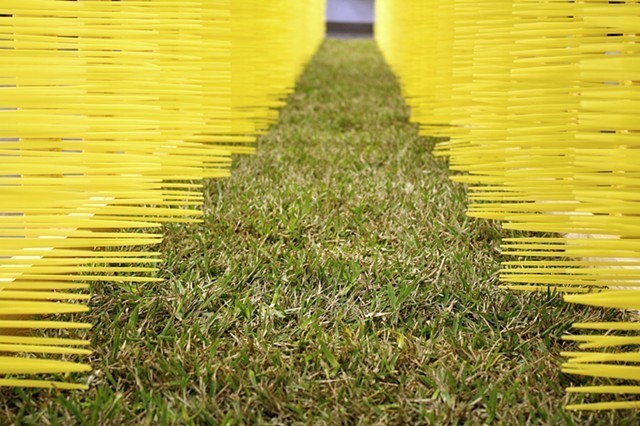 BRIAN R. JOBE's sculptures and site-specific installations explore the abstract concept of endlessness through a repetition of concrete forms. He uses common building materials such as cinder blocks, wood, roofing felt and plastic zip ties to draw in space, often creating an interactive pathway for the viewer. Brian's work is currently on view in two exhibitions: a two-person show titled Alignment 2x at the Center For Emerging Media at the University of Central Florida in Orlando (closing on February 22) and a solo installation titled Channel Modules at the Covenant College Art Gallery in Lookout Mountain, Georgia (closing on March 10). His upcoming solo show Land Overlap Wyoming opens in April 2013 at the University of Wyoming (Laramie), where he will simultaneously be a Visiting Artist. Brian lives in Knoxville, Tennessee.

OtherPeoplesPixels: For years your most prominent recurring material has been the plastic zip tie. When did you first use this material in your work? What is it about this material that continues to be so compelling to you?

Brian R. Jobe: I first introduced plastic zip ties and loop locks into my work in 2004 during grad school and worked to utilize their material possibilities in a comprehensive way over the next seven years. My last piece that used zip ties was Turfside Passage: it served as a capstone for the material, stretching it to what I felt was its most visually resolved and public end.

I grew up drawing and always loved lines. When I started using plastic zip ties, they replaced the thread and mason’s line I was using before that time. At present, I’m interested in marking space and time by creating structural contexts. Today, linear or modular materials like wood, concrete blocks or bricks extend how zip ties have functioned in the work before. These materials provide structure and mark linear paths through repetition of form. I’m interested in pathways, corridors, highways, hallways and architectural forms that are often seen as a means to an end. But I construct them to be an end in and of themselves. 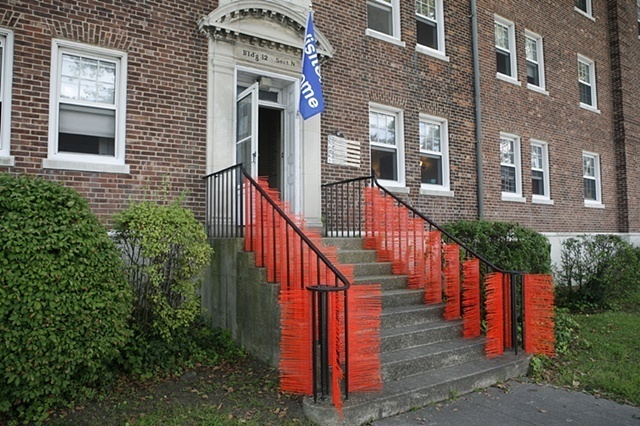 OPP: Your ongoing series Tuft vs.Turf includes outdoor, site-specific installations and found object sculptures. Between 2007 and 2011, you've wrapped plastic zip ties around road markers, cattle guards, railings, fire escapes, as well as found objects like a watering can, a hand saw, a meat tenderizer, and a utility lamp. Could you explain the title of the series? What does the gesture of wrapping these objects and sites mean to you?

BRJ: Tuft vs.Turf concluded in 2011 when I wrapped a forklift with zip ties which sat in front of the Blue Star Contemporary Art Center in San Antonio, Texas in conjunction with my solo show Blank Tides. The name Tuft vs.Turf highlights the tension between a spatial, geographic or static context and additive, physical markings. My aim with the ties is to re-contextualize a site or object so that the viewer might see it in a fresh way, in a reclaimed and also less functional way.

OPP: I read a more pointed ecological (or maybe philosophical) message in the early site-specific installations like Tuft vs.Turf (Cattle Guard) (2007) and Tuft vs.Turf (Gate) (2008). The fact that the zip ties are manufactured, made from plastic and often neon colors highlights the intrusion of the human hand into the natural environment. It seems significant that the plastic zip tie is a particular kind of strong, but temporary binding, and that it highlights these other means (the gate and the cattle guard) of the human attempt to dominate, or bind, nature. The meaning of the human intrusion shifts when you start to bring these outdoor installations into the city, as with Tuft vs. Turf (Fire Escape) (2009) and Tuft vs.Turf (Governors Island) (2009). When I looked at these, I began to think about the permanence or impermanence of graffiti and the way it is perceived of by some people as art and others as a public nuisance. What are your thoughts on this?

BRJ: Thanks for your highly considered reading of the work. While those interpretations weren’t my original intent, I’m glad to hear your observations and how you specifically relate to the series. It is always my aim for each piece to resonate on a universal level.

The immediate, secure, auditory gratification of each zip tie’s attachment paired with the temporal flexibility of the installations informed my selection of zip ties as the primary medium for that series. My goal throughout all of the Tuft vs. Turf projects was to create fluid, repetitive marks in space in order to highlight the architectural elements being wrapped and to alter viewers’ pre-conceived expectations about the element’s functionality. The pre-fabricated quality of the zip ties echoed the fabricated quality of the gate, cattle guard and fire escape.

For the rural interventions, I saw my action primarily as a way to respond to and spotlight the structural elements of a ranch environment. Similarly, it was my intent for the urban interventions to be seen in context (i.e. at a Chelsea gallery and at an art fair) and thus eliminate any question of its legality or any potentially subversive statement it may be making. 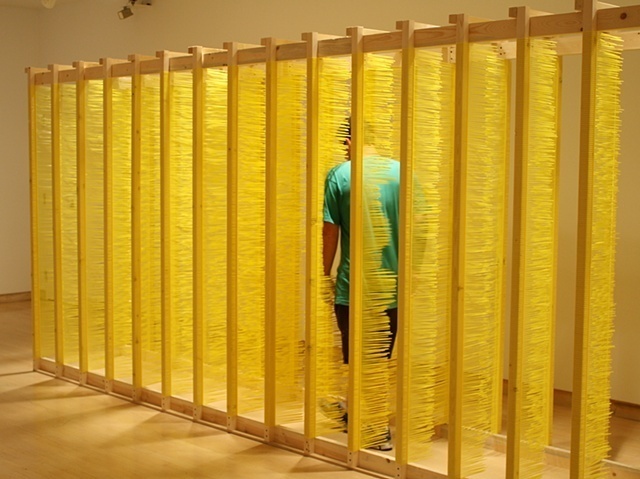 OPP: It looks like there was a shift in your practice around 2011, when you started to explore what you refer to as "the [innate] desire to move through corridors" in interactive sculptures like Turfside Passage (Knoxville) and in Land Overlap Tennessee #1 and #2 (2012). Is this desire a metaphor or some kind of biological imperative? Is that idea based in research or observation? Has audience interaction with Turfside Passage proven your hypothesis?

BRJ: Audience interaction with Turfside Passage has been the most dynamic I’ve witnessed. The participation ranges from the more private, personal experiences viewers have when walking through it to the delight of children running and screaming through it.

In my most recent work, I’ve reflected upon a motif that’s been recurring over the past ten years. When addressing large interior spaces, my inclination has been to create installations that require people to walk a circuit. That recurring pathway form, paired with a growing interest in architecture and public art, led me to create interactive corridors. Having an architect for a father, I’ve grown up thinking about space and material from an architectural point of view. I’ve recently decided that it’s a natural step for me to act on this tendency by building public structures. In fact, as my work shifts, I feel that I’ve only just begun my studio practice. I can finally can pair the material sensibility I’ve acquired with a clear vision towards representative and actual pathways. So, the desire to move through corridors is both metaphorical and actual.

My research into the form of pathway has often been visual and first-hand, specifically in experiencing James Turrell’s The Light Inside at The Museum of Fine Arts, Houston and the work of Richard Serra. Images of Richard Long’s walking pieces and by the scope of Robert Smithson’s oeuvre had a profound impact on me. I saw a terrific show last summer at Casey Kaplan in New York City of Liam Gillick’s recent projects that fired up my imagination. I also love the art of Sol LeWitt, Carl Andre, Christo and Jeanne-Claude, and Agnes Martin. 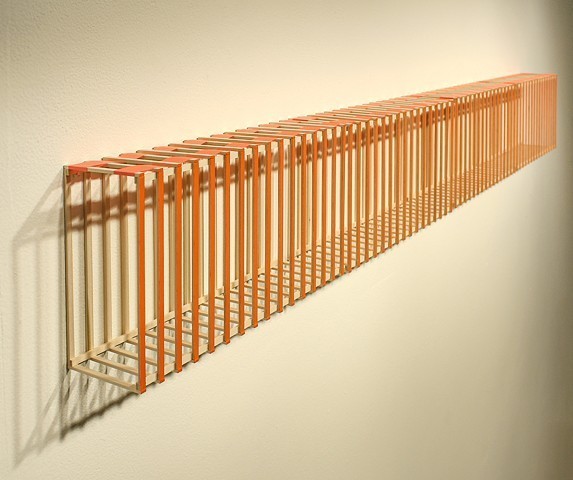 OPP: Your artist statement begins, "repetition signals endlessness." This statement combined with your corridors leads me to think about the postulation of the tunnel to heaven that people who have had near-death experiences talk about. And I think about the repetitive process of wrapping the zip ties as potentially meditative and maybe even evocative of the rosary. Is there a spiritual component to your work?

BRJ: As a child, I used to lie awake at night contemplating what it means to live forever after death, and I used to wish that forever were a fixed, quantifiable number like 10,000 years. The thought of endlessness has always been a startling notion, and my use of repetition in the work is a way for me to process the concept of forever.

Repetitive work can certainly be and has been meditative. The view of my corridors as “tunnels to heaven” is one of many associations that viewers may bring to the work. Personally, I’m coming from a place of wrestling with my smallness before God, and I’m exploring how the organization of material in sculpture can signal the wave of time yet to come. 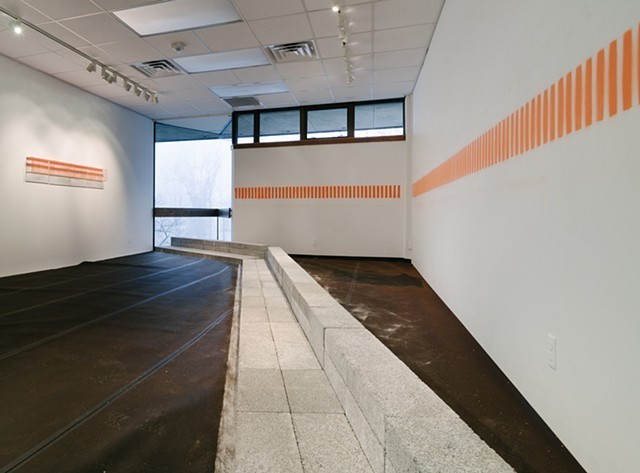 OPP: Tell us about the work in the two exhibitions your work is in right now.

BRJ: Both shows have different goals. My work in Alignment 2x at the Center For Emerging Media at the University of Central Florida is paired with the work of sculptor Jason S. Brown, and the two of us created a new collaborative piece for the occasion. That work, Lifted Jacked, is composed of stacked troughs of gravel situated on steel posts, cinderblocks and packing foam. The piece started by considering gravel as an alternative future currency—something we may return to later on—but it became a formal, intuitive installation that suggests interstate overpasses more than bank vaults.

The work in my solo show Channel Modules at the Covenant College Art Gallery is largely new, experimental and site-specific. I created a room-sized work titled Meridian Angle. I lined the floor with roofing felt and organized a block pathway to create an interactive corridor. I addressed the non-traditional, architectural elements of the gallery and also subdivided the space in a way that challenges the viewer's expectations. In addition, there’s a repeating, stenciled form on the wall made with spray chalk over a template. On another wall is a six-foot-wide piece, titled Gravel Modules, which suggests many of the same concepts that the room-sized installation does, except in a more condensed, straightforward way. It’s probably my favorite of the new works since it is an archetype for many future concepts. 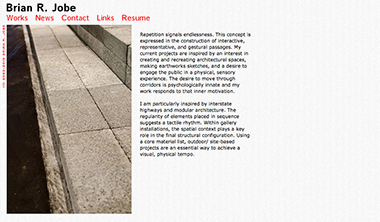