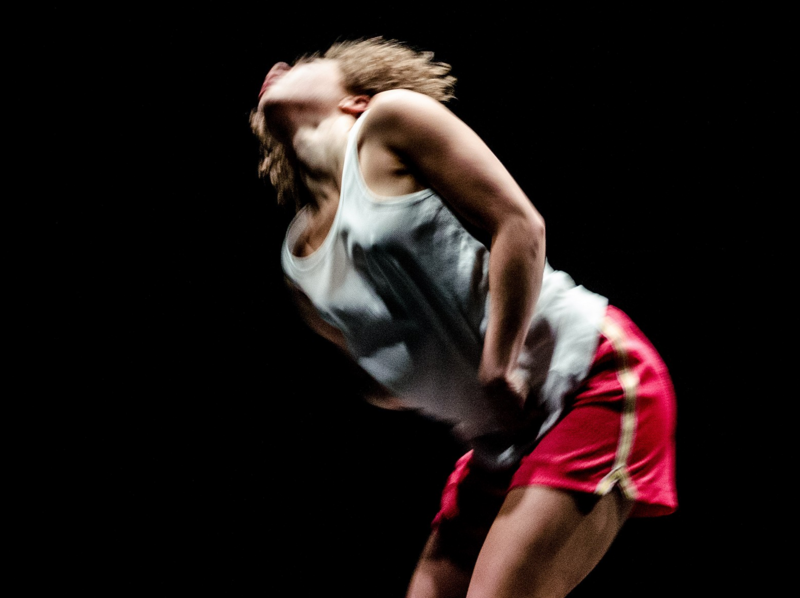 Energetic, empowered joy and overwrought exhaustion permeate ANNA MARTINE WHITEHEAD's performances and choreography. Their interdisciplinary practice—which includes writing, dance, choreography, video and collaboration— investigates Black queer experience through deeply embodied movement. Martine earned a BA in Fine Art, with a concentration Black Women’s Studies, at University of Maryland (2006), followed by an ​MFA in Social Practice at California College of the Arts (2010). She is a 2014 Critical Fierceness Grantee, a 2015 Sponsored Artist at High Concept Labs, a 2017 LinkUP Artist-in-Residence at Links Hall and will be a 2018 Difficult Dances Resident Artist at University of Michigan. In 2017, they performed selections at the Elevate Chicago Dance Festival, Ragdale, and JACK, as well as S P R E A D at Chicago's Links Hall and FRESH Festival in San Francisco. Her book TREASURE: My Black Rupture is available through Thread Makes Blanket Press. In 2018, they will present Notes on Territory at Whitman College in Walla Walla, Washington. Martine lives and works in Chicago.

OtherPeoplesPixels: Have you always been so interdisciplinary? Do you see any one of these creative forms as most to your work?

Anna Martine Whitehead: When I was in college, I majored in Fine Art (there was no medium specification for the BA at the University of Maryland). I was painting and beginning to explore performance. But I did my minor in Black Women's Studies, which was a new program at the school then. So I was always thinking visually, textually, engaged in scholarly research but also material research. My thesis year, I ended up doing this series of large-scale acrylic paintings on wood panels that were all about the female body and sugar cane, which was directly related to what I was learning and thinking about around Black feminist geographies. That got me to start performing with sugar cane. All these things were always already integrated for me. I see this, also, as a reflection of my life, where teaching, moving, writing, making, being queer, being black and mixed race, etc, have always been all part of the same project. That project is me. When people find out I have a book called TREASURE, which is the same name as a piece I did at High Concept Labs in 2016 with Mlondi Zondi and Marie Alarcón, they are surprised. But this is how I've always operated: When I'm making, I'm writing, and writing makes me want to make.


A further exploration of 'Cake Legs,' presented at Chrysalis, one of the exhibitions associated with PLATFORMS: 10 Years of Chances Dances in Chicago, 2015.

OPP: What does the word embodiment mean to you, in your creative practice and in your everyday life?

AMW: This is such a great question! I try to teach this to my students, and it's an extremely difficult concept! For me, embodiment has become totally about an awareness of one's physical reality that also allows for an awareness of the metaphysical. It is the opposite of self-denial. It's not necessarily hedonism. It’s not, my body wants to lay here and binge watch instead of working in my studio—although that is an extremely easy place to slip into. Rather it’s an awareness and an acknowledgment of the body. I’m in the studio, I have some movement I need to work out, and I'm exhausted, so this movement is going to look like a tired person moving.


S P R E A D, 2017. Performed at Links Hall for the Link Up Artist Showcase. Video by Curtis Matzke.

OPP: Is exhaustion a theme in your work?

AMW: The piece I have been engaged with for the last two years (S P R E A D) comes directly out of being exhausted and needing nourishment. I think some people in this political climate get really energized. I have moments of that, but mostly it's like this constant struggle to not just feel totally run down, and I know that my people and my community are with me in that struggle. So a large part of the piece is me lying on the ground while Black people, especially Black women, share food together. It just so happens that lying down could also look like being dead, and I don't think that's just a metaphor. For me, embodiment is about holding both those things. It's like saying, I don't have to resist this reality. I can make my work about resting. And it also then becomes about death and the giving into death, which could be a type of relief.

The kind of funny thing about that is that after lying on the floor for 30 or 40 minutes, I actually have to get up... it starts to hurt my back. So then it becomes this dialectical thing between giving into the death/exhaustion and resisting it. That's what my body feels, and that's what the work is conceptually, too. 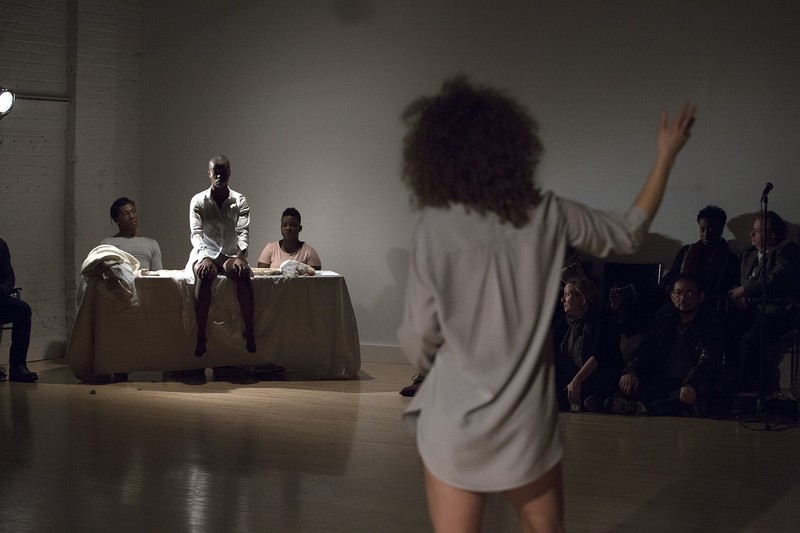 OPP: S P R E A D (2017) was recently performed at Links Hall in Chicago. Tell us about its development.

AMW: S P R E A D was being developed at the same time that I was in this intensive devising process with Rebecca Mwase, Ron Ragin, and an ensemble of Black women dancers, singers, comedians, and spiritual workers in New Orleans. We were making a piece about Black women's experience through the Middle Passage. I also was teaching dance at Stateville Prison, a maximum security men's facility in Joliette. So the sense of being haunted, blackness, survival, long term struggle, unending struggle, a struggle that only exists by the grace of whatever gods and spirits and things hang around you... this was like ever-present. S P R E A D was a way for me to syncretize all this highly-collaborative work with my own perspective and experiences. 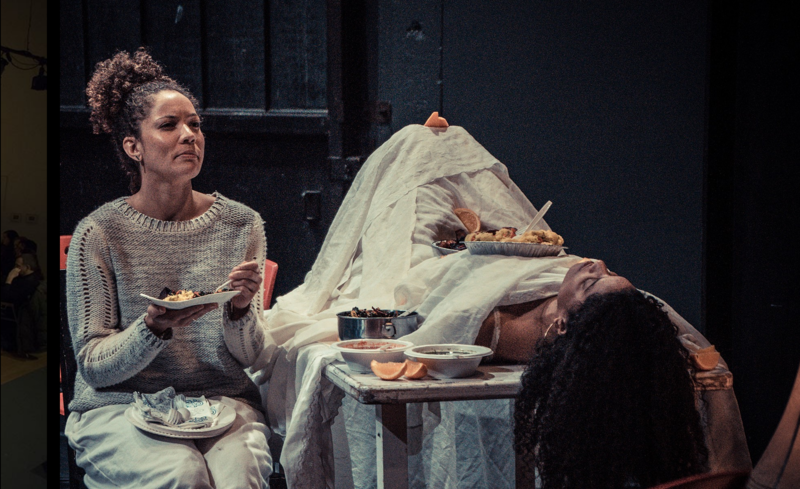 OPP: Do you also create the sound pieces that you dance and choreograph to?

AMW: Sometimes. Sound in my video work is usually me. S P R E A D was the first time I worked so closely with a sound artist. Damon Locks joined the project early on and really changed the shape of it, actually gave it shape and form and a container through sound. Damon is live in S P R E A D, and that whole piece is primarily improvisation.

It was also the first time I made work that felt so explicitly about Black woman-ness and sisterhood. It wasn't only about that, but all the performers are cis and trans Black women and one of the opening scenes is Trinity Bobo (a dancer in New York who is such a joy to work with) lying on a table draped in whites and decorated lovingly with delicious food prepared by a local chef (Chef Fresh, who has been making food for the queer and trans Black community in Chicago for a minute). I was really on some BLM stuff as I was making this—and I mean that exactly as it was first coined, as a Black Feminist project. 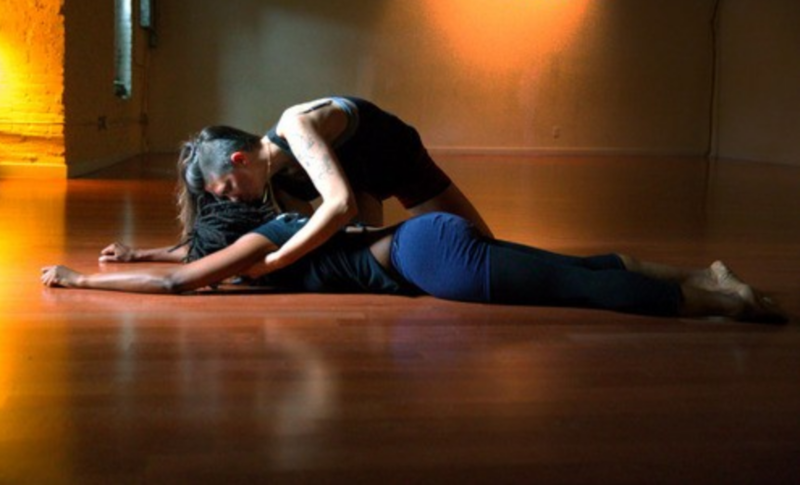 OPP: I often ask about intended audience, even when interviewing sculptors and painters. But with performance, you can see your audience. How do you think about audience?

AMW: S P R E A D helped me change my relationship to my audience, which is almost always at least 50% white. When I first started performing, I was usually angry at them, and then at some point I became more disinterested—like, this is for me and fuck all ya’ll—but S P R E A D was a way to be in dialogue and community with the audience. With the Black people and the POC, we were breaking bread together, dueting at some moments, and generally being with one another. With the white folks, it was an offering: Can you allow us to be together and feel okay? Can you even feel joy that we feel joy, even though our joy has nothing to do with you—may even be in spite of you? Can you be that detached from your own whiteness? And the fact that the whole show is set up in one row in a circle means everyone sees each other at all times. It's really a piece about Yo, here we all are! For better or worse! I guess it's kind of utopic?

Since the Links Hall show, I continue to collab with Damon and Trinity, and we're looking forward to several residencies in 2018 to continue developing what this work is.

AMW: Notes on Territory! I'm so excited about this project, which is a solo project. It’s essentially a movement-based PowerPoint presentation about the architectural and affective links between gothic cathedrals, colonial forts, prisons and public housing. It's definitely a PowerPoint presentation—there’s a lectern.

I'll be spending the next few months at the Herskovits Library of African Studies at Northwestern University to do some archival research. It's also a lot of language-play; it's a poem. And it's a sort of game between technology and me because there's all this video and audio stuff. It’s a solo, so there's a lot of logistics to figure out there. And of course, it has all these auxiliary elements. Territory has gotten me back to painting. As I've been doing the archive and movement research, I've also been working with these gouache pieces exploring architectures, military maps, color, shape, etc. I'll be showing works in progress of Territory throughout the spring of 2018, and then hope to really solidify the work at a residency in the summer and hopefully premiere in the fall. We'll see about this timeline, though.... 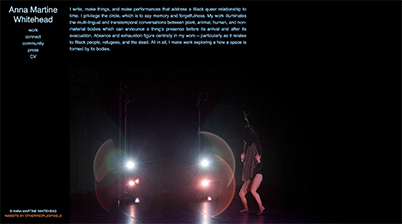