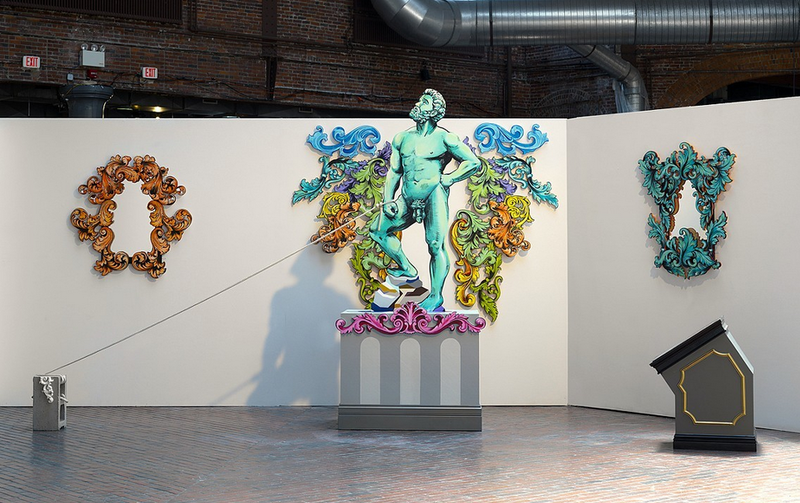 ADAM MATAK employs decidedly mundane media—BIC pens, graffiti markers and rubber stamps— to complicate notions of cultural value. His allegorical paintings of museum goers, for example, use the style of comics to question our always-changing relationship to esteemed art objects. Adam recently graduated from the School of the Museum of Fine Arts in Boston and was named by the Boston Globe as one of the six Boston grads to watch. Some Assembly Required, a three-person show organized by Adam, closed recently at the Museum of Fine Arts in Boston. His work will be included in an upcoming group exhibition  featuring five accomplished Ontario-based artists. The (as yet untitled) show opens in January 2016 at the Thames Art Gallery. Adam lives and works in Hamilton, Ontario.

OtherPeoplesPixels: Why are acrylic and graffiti marker the ideal media for you?

Adam Matak: These media allow me to work largely and quickly. When I started using the markers, there were very few options. It wasn’t until around 2002 that paint markers began being available and offered many more approaches. They not only helped me get ideas out quicker, but really fueled themes often present in my work: the confusion between the artificial and the real, old rubbing against the now.

I also feel more comfortable drawing with a tool that I do not have to recharge. And there is something very contemporary about holding the plastic body of a drawing tool like a marker. Much of our environment is plastic. Technology is plastic. Newness is plastic. Plastic paint and plastic tools feel right for me, especially when addressing contemporary views of historic objects. 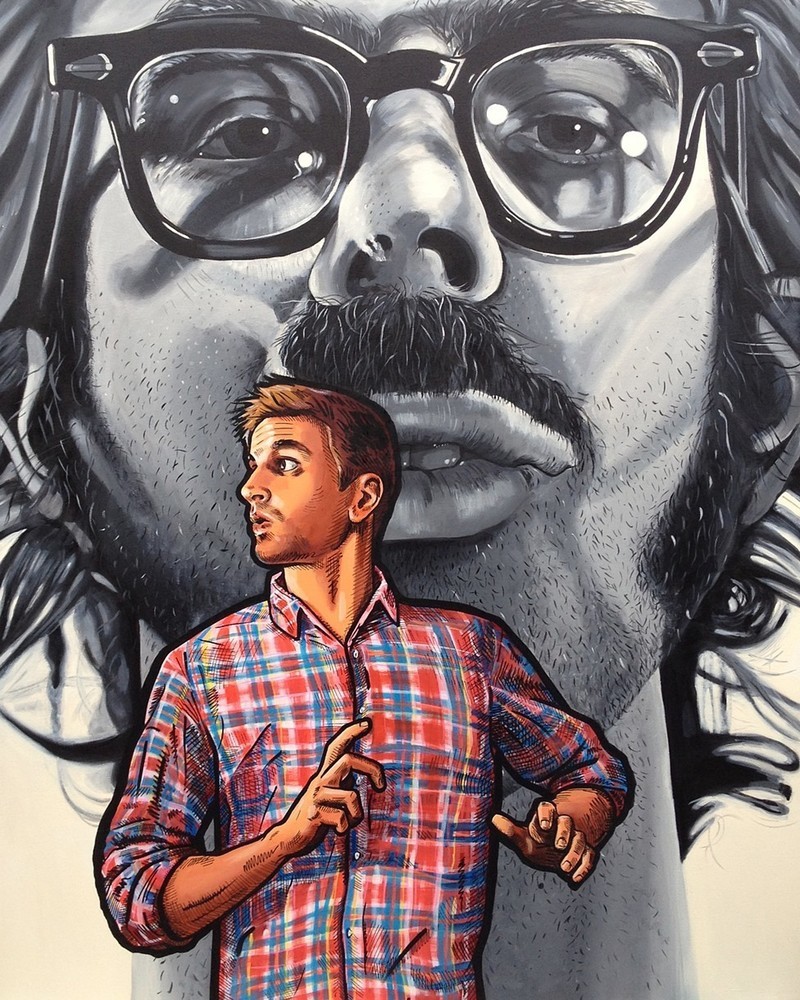 OPP: What role does style play in your practice, formally and conceptually? I'm thinking both of the historic flourishes of the fleur-de-lys in Ornaments, as well as your graphic style of painting, which references comics.

AM: There is a playfulness in my palette and style. This can be both disarming and welcoming. It is also obviously not real, like the signage for a carnival or an amusement park. Actually, some of the embellishments you are referring to are derived from old variety shows and circus wagons, whereas others come from baroque cathedrals.

The style I use reveals a fiction that is taking place. I classicize my sourced images and finish them with real definitive line work much like a comic or cartoon. I exaggerate the colour and often the poses of the character; both become too inflated to be mimicking reality. These references to the comic, the cartoon or graphic let the viewer know there is some kind of narrative at play. Very rarely are these narrative art forms based in the non-fiction.

For me that aesthetic is very plastic and very slick, like many of the material things we are drawn to. An interesting friction happens when this slick aesthetic is used to depict historical stories we may otherwise consider “facts.” This can be the notion of a grand narrative in art history, stories we have of Founding Fathers or stories that teach us morals or virtues.

OPP: That makes me think of your series Objects of Value. What’s the fiction represented in your bic pen drawings of Canadian currency and Canadian politicians?

AM: I stayed pretty faithful to the bills and portraits when completing this series. I didn’t stylize them like my painted works. For me, the tension lies in the use of the the BIC pen, a ubiquitous tool, to create works of reified figures and objects that not only hold value, but a nation’s imagined culture. In the 80s, we had birds on the backs of our bills, then hockey players and now public monuments. . . all those things are full of meaning, but the cheapness of the pen helps propose multiple interpretations of those images. 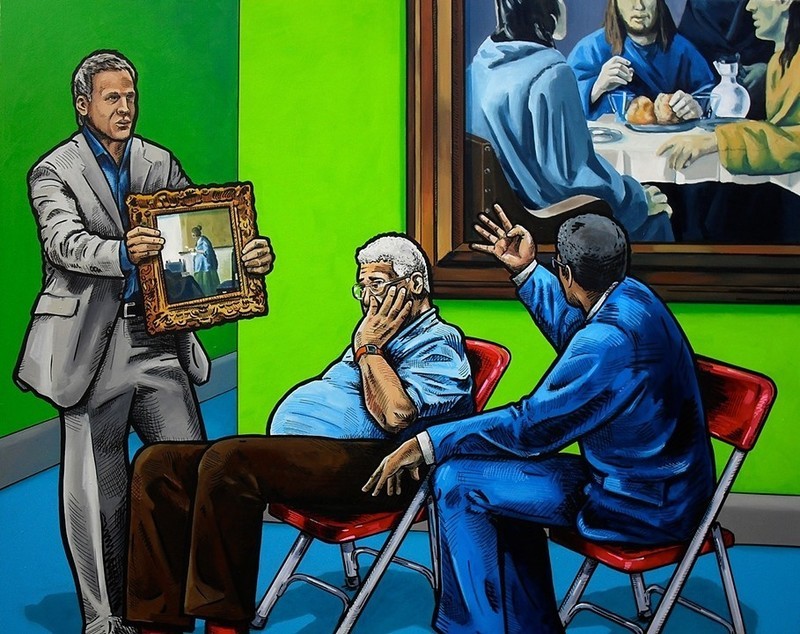 OPP: In your series Museum Studies, works like Philistine, The Scholar and The Critic refer to experiences of insecurity, apathy, misdirected attention and hubris as they relate to art viewing. But across the board, almost no one—except in Common Grave and Diptych (Amsterdam)— is actually looking at the art. Are these paintings metaphors for individual experiences of art or allegories of collective culture values?

AM: I see the paintings as active characters unto themselves. They are surrogates or stand-ins for stories, people, periods of time and specific values.

A few years back I started hearing NBA owners refer to players as “pieces,” as in “we have acquired a few new pieces in this off season which should complete our team.” I was struck by how dehumanizing that was, and also how the players’ value was related to how they fit in with other players. In my painting, The Value of Belief, I used an image from the newspaper of an NBA General Manager and his coaching staff to be the evaluators of works of art. The works in the background are Dutch paintings, one by Vermeer and the other by a Vermeer forger, Han van Meegeren. The van Meegeren is very interesting, as the value of the painting has changed since it was discovered that it was in fact not a Vermeer. It’s a painting of the story of the Supper at Emmaus, where an incognito Jesus reveals himself, during a meal, as the resurrected saviour. The meaning of the conversations and the meal instantly change. Here, value is revealed as extremely relational through the figures and the art objects that surround them.

I am enthralled with the idea of meaning of cultural objects changing over time. That series explores that conceptual space. Since studying (and living) in Boston, I have become obsessed with public monuments, what they used to mean and what meaning they have today. That heavily influenced my thesis show. 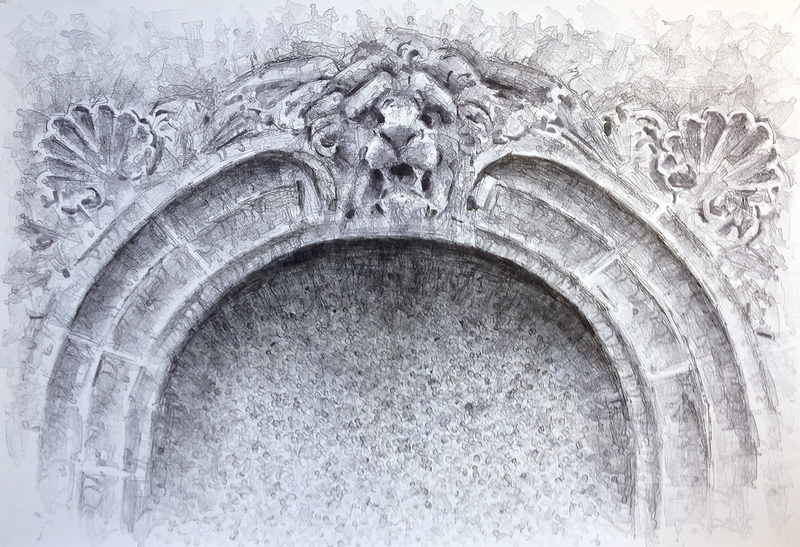 OPP: Tell us about your thesis show.

AM: My thesis show at the Boston Center for the Arts relied the most on audience participation of any of my previous work. I wanted to take advantage of the sheer volume of people that would walk through the space opening night. I think about 1200 people came to the opening, which makes it difficult for more intimate work to be appreciated. I created this giant, heroic male nude on a monumental pedestal. I ramped up his perceived importance with elaborate embellishments around him, like a niche. The figure was tethered to a rope and viewers were invited to topple the hero, leaving the niche empty for the viewer. With the empty niche, some people began taking selfies, ornamenting themselves as the people of value. However, when the rope was released, the hero magically returned to his position of power. Those that ventured into the niche saw the back of the figure and pedestal, which revealed the hydraulics and exposed the trick.

For the less active, I created mirrored works to draw the viewers in, and again be ornamented. In both cases, people could replace reified objects with themselves. 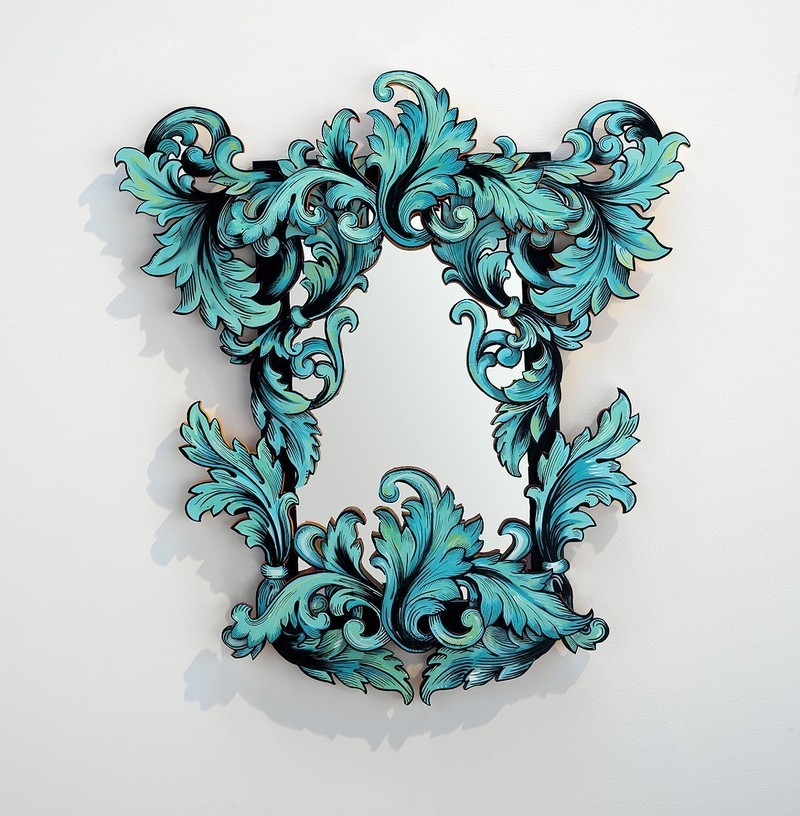 OPP: You completed your BFA in 2002 and earned a Bachelor of Education in 2004. But you didn't go on to pursue an MFA until 2013. What led you to return to school after a decade of successful solo exhibitions? Do you think more artists should wait before heading to graduate school?

AM: The art world had changed so drastically in that time—perhaps because of the internet—in terms of the way people were making art, consuming art and teaching art. I wanted to unpack a lot of that in returning to school.

For me it was a classic case of needing to know what I didn’t know, so I could go to a place asking the right questions. I had also become too comfortable with the way I was making, and I was a bit worried about that. Grad school allowed me to dig deeper into my ideas and to see what I could produce in this new arena if I gave my art some undivided attention.

I’m not sure about timing of graduate school for others. I find that is always going to vary. But I do believe those considering grad school know what they want to get out of it and be aware if the institution they chose can provide what they want.